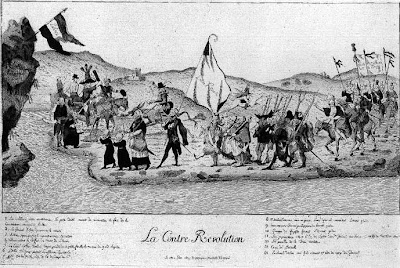 How does the historian need to think as he or she formulates a discursive representation of a complex period of history? What assumptions does the historian make about the structures and entities that make up the social world? And what sorts of conceptual systems are needed in order to permit the historian to do his or her work of analysis, comparison, and explanation? These questions lead us to a philosophical version of the problem: what forms of ontology do historians employ in analyzing history?

and The French Revolution 1787-1799: From the Storming of the Bastille to Napoleon

Soboul begins his short history with a chronology of “principal events” – roughly 150 events from February 1787 to November 1789. He refers to happenings at a variety of levels of scale in this chronology, from actions by a small number of individuals to events encompassing hundreds of thousands over a dispersed geography. Here is a partial list:

Assembly of the Notables, Calonne dismissed, abortive reform of Parlements, “Day of the Tiles” in Grenoble, rural and urban unrest increases, riot in the Baubourg St.-Antoine, fall of the Bastille, The Great Fear, Assembly moves to Paris from Versailles, Church lands nationalized, mutiny and repression of garrison at Nancy, Louis XVI’s attempted flight from the country, foundation of the Feuillants Club, massacre of the Champ de Mars, mounting unrest caused by food prices, uprising at Paris overthrows the Monarchy, massacre of prisoners in Paris, execution of Louis XVI, murder of Marat …

… and so on through crowd violence, state action, military movements, rise and fall of revolutionary leaders, political factions, ideologies, and bloodshed.

Some of these items are events in a specific time and place enacted by a small group of people (mutiny, storming of the Bastille); others are regionally diffuse collections of such local actions (the Great Fear, for example); and others are actions of officials, leaders, and generals. So clearly Soboul’s historical ontology includes “events”, which perhaps we can define as “actions by individuals and groups, both large and small.” (This definition captures most but not all the items in Soboul’s chronology.)

What about social entities beyond the level of actions by individuals? Here are some of the sorts of higher-level structures to which Soboul refers in his account: the Revolution itself, as a thing that exists in history, has causes, and has a “nature”; but also a larger category within which the French Revolution is one instance – “revolution”. He refers to earlier social orders (the seigneurial system and the privileged orders of feudal society); a new social order (liberal democracy, bourgeois economy); large historical structures such as feudalism and capitalism; and a specific category of revolution (bourgeois revolution). Several of these concepts fall in the general category of a “type of social and economic organization” – what Marx refers to as a “mode of production.” (Here is Soboul’s paraphrase of the idea of feudalism: “a concept of social and economic history, defined by a particular form of property ownership and by a system of production based on landed property, preceding the modern system of capitalist production” ((Soboul 1977) : 3).)

He refers to different forms of the social management of labor (corvée labor, slave labor). He refers to specific periods of governance in French history – for example, the Capetian monarchy; and he refers to a type of governance – the absolutist monarchy. He refers to classes – the bourgeoisie, the landlord class, the peasant class. It is apparent that Soboul’s historical ontology incorporates large stretches of Marx’s social theory of the structures that constitute society: forces and relations of production, property systems, modes of production, superstructures such as the state and the church.

There is also an ontology of social institutions in Soboul’s writing about the Revolution. He refers to subordinate social organizations within existing society – the officer corps, the Church. He refers to economic and demographic processes – population increase, trends of price movements for grain. He refers to features of political consciousness on the part of various social actors – hopes, fears, revolutionary spontaneity (38). And he refers to political groups and clubs – the Girondins (“spokesmen of the commercial bourgeoisie”; 87), Montagnards and Jacobins (bourgeois but appealing to common people; 88), and Sans-Culottes (the organized representatives of the common people; 100).

So Soboul’s historical vocabulary is a rich one, in that he refers to historical things and structures at a variety of levels. We might paraphrase Soboul’s historical ontology in these terms: the French populace of the 1770s consisted of a geographically dispersed collection of persons enmeshed social, economic, and political structures. The circumstances of life and opportunity created for different people by these structures in turn defined them as “classes” with interests and motivations. Peasants, artisans, landowners, lawyers, and government officials had very different views of the social world, and their political behavior was accordingly different as well. The political struggles that constituted the turmoil of the years of revolution derived from contests over power among different groups of people, mobilized by different organizations with different social, economic, and political interests.

In other words, Soboul works with a “proto-theory” of what a society is, how it works, and how individuals are influenced in their ordinary conduct; within the context of this scheme, the task of the historian is to discover some of the specific features of those social relations and features of consciousness, and explain the small and large events that combined to bring about “the Revolution”.

Combining the results of a similar survey of a number of historians — de Tocqueville, Soboul, Schama, Darnton, Cobb, Sewell, Tilly, and others — we can arrive at something like an inventory of ontological concepts of the French Revolution – events, individuals, structures, mentalities, processes, conditions, patterns, and technologies. These categories of historical “things” encompass what begins to look like a comprehensive list of the types of entities to which historians refer when conceptualizing France’s revolution. Or in other words: it is possible for us as readers of these historians to sketch out a large historical ontology, from which different historians borrow in varying proportions in their analysis of the events of the late eighteenth century in France.

2 Replies to “Ontology of the French Revolution”