Several recent posts have focused on the topic of simulations in the social sciences. An interesting question here is whether these simulation models shed light on the questions of emergence and reduction that frequently arise in the philosophy of the social sciences. In most cases the models I’ve mentioned are “aggregation” models, in which the simulation attempts to capture the chief dynamics and interaction effects of the units and then work out the behavior and evolution of the ensemble. This is visibly clear when it comes to agent-based models. However, some of the scholars whose work I admire are “complexity” theorists, and a common view within complexity studies is the idea that the system has properties that are difficult or impossible to derive from the features of the units.

So does this body of work give weight to the idea of emergence, or does it incline us more in the direction of supervenience and ontological unit-ism?

John Miller and Scott Page provide an accessible framework within which to consider these kinds of problems in Complex Adaptive Systems: An Introduction to Computational Models of Social Life. They look at certain kinds of social phenomena as constituting what they call “complex adaptive systems,” and they try to demonstrate how some of the computational tools developed in the sciences of complex systems can be deployed to analyze and explain complex social outcomes. Here is how they characterize the key concepts:

Page and Miller believe that social phenomena often display “emergence” in a way that we can make sense of. Here is the umbrella notion they begin with:

The usual notion put forth underlying emergence is that individual, localized behavior aggregates into global behavior that is, in some sense, disconnected from its origins. Such a disconnection implies that, within limits, the details of the local behavior do not matter to the aggregate outcome. (kl 826)

Under organized complexity, the relationships among the agents are such that through various feedbacks and structural contingencies, agent variations no longer cancel one another out but, rather, become reinforcing. In such a world, we leave the realm of the Law of Large Numbers and instead embark down paths unknown. While we have ample evidence, both empirical and experimental, that under organized complexity, systems can exhibit aggregate properties that are not directly tied to agent details, a sound theoretical foothold from which to leverage this observation is only now being constructed. (kl 976)

Organized complexity, in their view, is a substantive and important kind of emergence in social systems, and this concept plays a key role in their view of complex adaptive systems.

Another — and contrarian — contribution to this field is provided by Joshua Epstein. His three-volume work on agent-based models is a fundamental text book for the field. Here are the titles:

Agent-based models provide computational demonstrations that a given microspecification is in fact sufficient to generate a macrostructure of interest…. Rather, the generativist wants an account of the configuration’s attainment by a decentralized system of heterogeneous autonomous agents. Thus, the motto of generative social science, if you will, is: If you didn’t grow it, you didn’t explain its emergence. (42)

Epstein describes an extensive attempt to model a historical population using agent-based modeling techniques, the Artificial Anasazi project (link). This work is presented in Dean, Gumerman, Epstein, Axtell, Swedlund, McCarroll, and Parker, “Understanding Anasazi Culture Change through Agent-Based Modeling” in Dynamics in Human and Primate Societies: Agent-Based Modeling of Social and Spatial Processes. The model takes a time series of fundamental environmental, climate, and agricultural data as given, and he and his team attempt to reconstruct (generate) the pattern of habitation that would result. Here is the finding they arrive at: 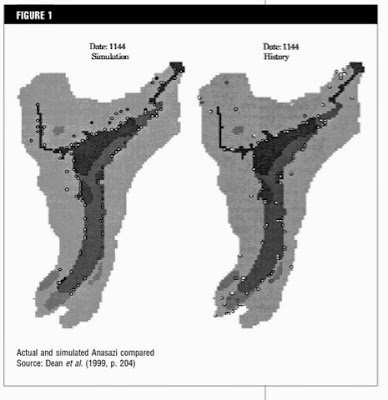 Generativity seems to be directly incompatible with the idea of emergence, and in fact Epstein takes pains to cast doubt on that idea.

I have always been uncomfortable with the vagueness–and occasional mysticism–surrounding this word and, accordingly, tried to define it quite narrowly…. There, we defined “emergent phenomena” to be simply “stable macroscopic patterns arising from local interaction of agents.” (53)

So Epstein and Page both make use of the methods of agent based modeling, but they disagree about the idea of emergence. Page believes that complex adaptive systems give rise to properties that are emergent and irreducible; whereas Epstein doesn’t think the idea makes a lot of sense. Rather, Epstein’s view depends on the idea that we can reproduce (generate) the macro phenomena based on a model involving the agents and their interactions. Macro phenomena are generated by the interactions of the units; whereas for Page and Miller, macro phenomena in some systems have properties that cannot be easily derived from the activities of the units.

At the moment, anyway, I find myself attracted to Herbert Simon’s effort to split the difference by referring to “weak emergence” (link):

… reductionism in principle even though it is not easy (often not even computationally feasible) to infer rigorously the properties of the whole from knowledge of the properties of the parts. In this pragmatic way, we can build nearly independent theories for each successive level of complexity, but at the same time, build bridging theories that show how each higher level can be accounted for in terms of the elements and relations of the next level down. (Sciences of the Artificial 3rd edition 172)

This view emphasizes the computational and epistemic limits that sometimes preclude generating the phenomena in question — for example, the problems raised by non-linear causal relations and causal interdependence. Many observers have noted that the behavior of tightly linked causal systems may be impossible to predict, even when we are confident that the system outcomes are the result of “nothing but” the interactions of the units and sub-systems.