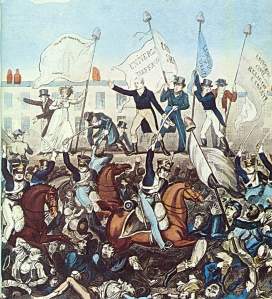 Social science methods and historical explanation seem to come together in several different ways; what can we say about the differences of approach between “history using the tools of the social sciences” and “social science research that pays close attention to history”?

E. P. Thompson treats the making of the English working class. His work is multi-faceted. He gives treatment of workingmen’s organizations and publications; churches and pastors; riots and chants; petitions to parliament; and much else. The story is historical in several respects: it provides an account of change over time and it engages in detailed and fine-grained description of specific circumstances in the past. Is Thompson attempting to explain something? Perhaps it is more accurate to say that his aim is to describe this extended, multi-location, multi-group process of “making”, along with some sense of the circumstances and features of agency that brought this “class” into being. And he goes out of his way to emphasize the contingency of the story that he tells: this “class” could have taken a very different shape, depending on altered circumstances and agency along the way. His is as much like the work of a biographer, detailing the development of personality, the contingencies of personal history, the formation of character, and the actions of the mature person.

Charles Tilly treats the development of contentious politics in France over three centuries. His account too is “historical”: it describes the development and diversity of contentious politics in France through revolution and periods of quiet. His account too is attentive to difference; he emphasizes the many ways in which French contentious “underclass” politics varied across time and across region. The politics of workers in Paris were quite different from those of the winemakers of the Vendée. But Tilly’s account is deliberately sociological and theoretical. The goal of his study is to discover causes; to test a few theoretical hypotheses about mobilization; and to use the “data” of French working class history as a basis for testing and evaluating sociological theory.

Each of these examples is a major intellectual contribution; each contributes to our historical understanding; each focuses on a historically situated working class. But the two oeuvres have substantial differences of orientation and feel. One is explicitly theoretical in its goals; the other is nuanced and descriptive. One aims at arriving at explanations; the other is interested in providing a qualitative understanding of the experience of ordinary men and women of the 18th and 19th centuries in rural England. One is historical social science, while the other is social science history.

So it is an important question within the philosophy of history, to articulate the difference between these two configurations of “social science” and “history.” How are the two genres distinguished? Are they differences of style, each embodying a complex of narrative and explanatory values? Are they at opposing ends of some sort of spectrum, ranging from descriptive to explanatory or concrete to abstract? Or are they actually logically different in some way—perhaps along the lines of the distinction between three conceptions of time described by William Sewell?

How might we characterize some of the differences between these two bodies of writing about the past? Do they constitute different paradigms, research frameworks, or forms of historical practice? Do they embody different complexes of assumptions about what to emphasize, what the standards of rigor are, what is required by way of description, detail, and fact; what is intended by way of explanation and understanding; the role that interpretation of the lived experience of agents plays; and so on?

It seems from some of these scattered observations, that there is indeed a significant difference between social science history and historical social science. The explanatory goals appear to be different, and the methods of reasoning and standards of rigor and adequacy seem to be distinct as well. So the question of how the disciplinary differences fit together is one that demands continued scrutiny.