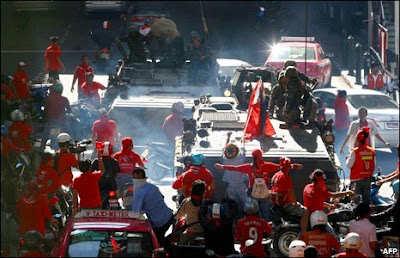 Thailand’s civil unrest took a new turn Saturday (4/11/09) when “redshirt” demonstrators managed to push through security forces and invade the resort hotel where ministers of ASEAN were preparing to meet. These demonstrations were organized by the Democratic Alliance Against Dictatorship (DAAD). The ASEAN meeting was scheduled in the Pattaya beach resort, roughly 90 miles from Bangkok. (Here are some very graphic photos of the hotel invasion published in a Thai news publication.) Demonstrators smashed doors and windows in the hotel, raced through the building, and found their way to rooms where several ministers were lunching. The ministers fled through the back of the hotel and were evacuated by helicopter and boat. Reports indicate that the early phase of the demonstrations in Pattaya was opposed by local people (“blueshirts”), who attempted to block the redshirt march to the resort; but they were quickly overwhelmed by a show of force by the redshirts (report). The Thai government immediately canceled the ASEAN meeting and evacuated the ministers from the country. Large demonstrations continue in Bangkok today by redshirt activists, and the situation is unfolding rapidly. (Here is a GoogleMaps image of the environs of the Royal Cliff Beach Resort (A) where the ASEAN meeting was to occur.)

Some commentators describe the basic struggle as one between former prime minister Thaksin Shinawatra’s followers who want to see a major redistribution of power and resources in Thai society (redshirts; DAAD), against the forces of the status quo and the powerful and privileged, represented by current prime minister Abhisit (yellowshirts; PAD). (Others denounce Thaksin’s motives as being corrupt and self-serving, more interested in power than social reform.) Redshirt support tends to draw from poor and unemployed Thais, largely rural, whereas the yellowshirt movement tends to reflect the powerful groups in Thai society, including the military and business elites. The redshirt demonstrators are supporters of Thaksin and are demanding the resignation of Abhisit. Thaksin was forced from office in a military coup in September 2006. Demonstrations by “yellowshirt” groups and the People’s Alliance for Democracy (PAD) against the government by the People’s Power Party allied with Thaksin in September and October 2008 led to the closure of Thailand’s major airports and had a large economic impact on Thailand by its effects on tourism. Abhisit became prime minister in December 2008. Thaksin is playing a visible role in encouraging the current round of demonstrations against the government and is evidently positioning himself as the only person who can bring the redshirt movement off the streets. (Here is an article by Michael K. Connors that provides much of the recent background. Michael Connors’ blog, Sovereign Myth, will be interesting to follow as well.)

In other words, Thailand has been undergoing a period of intense social unrest for several years, with major contentious organizations at work to further their programs and mobilize followers, and with occasional outbursts of major urban demonstrations and riots. And the relations among the most powerful groups in Thai society seem to be up for grabs: the military, the business elites, the middle class, the urban poor, and the rural poor. Each segment wants something; and increasingly it seems that their demands find expression in mass mobilizations in the streets of Bangkok.

These events are interesting from several points of view. One is the simple fact that a relatively small group of demonstrators was able to bypass Thailand’s security forces in their security deployment for a major international summit. This seems roughly as shocking as if demonstrators had succeeded in penetrating the meeting rooms of the G20 in the Excel Centre in London. News reports suggest that the police and army units offered no resistance to the protesters in their assault on the resort hotel. This seems to imply that the government has uncertain control of the police and security forces — an impression reinforced by demonstrations taking place today in Bangkok in which demonstrators have succeeded in seizing police vehicles and weapons.

It is also interesting to consider what must be occurring beneath the surface in order to support the mobilization and coordinated actions of large groups of redshirt demonstrators in Pattaya and Bangkok. What are the forms of organization, leadership, and communication that support this extensive level of mobilization? What kinds of networks have been established to permit quick and effective mobilization? How are radio and television, cell phones, text messages, and twitter feeds being used to rally supporters? Where does the money come from that both redshirts and yellowshirts have identified as being important inducements to participation by poor people? For that matter — what sort of organization or mobilization took place in order to bring the blueshirts mentioned above into action in Pattaya? (A story in The Nation suggests that this may have been the result of efforts by a government agent.) In Bangkok “red” radio stations appear to be broadcasting calls to action by supporters of the DAAD. FM 92.75 and FM 107.5 are mentioned in a current story in The Nation.

As for leadership — one leader of the redshirts in Pattaya is mentioned in several news reports, Arisman Pongruengrong. If you google his name today, you’ll find he was arrested within the past twelve hours (post, post). Here’s a photo of Arisman in Pattaya on Saturday: 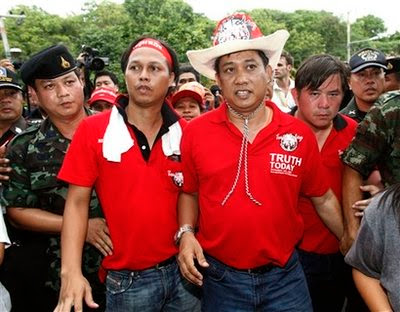 Another dimension of interest is a “new media” point: it is possible to get a fair amount of real-time information about the demonstration and public attitudes by following relevant keywords on Twitter. If you search for #redshirt on Twitter, you’ll get a steady stream of comments and events (search.twitter.com). (There are other utilities that permit easy Twitter searches as well — for example, tweetvisor.) And it seems possible to put together a spatial and temporal picture of the events based on references to specific streets and intersections. With enough patience it would be possible to annotate the Google map clipped above with specific events mentioned in the twitter feeds: taxis blocking this street, APC seized on that street, etc. Here’s a start of a map of Bangkok indicating the locations of Government House and a major protest blockade on Din Daeng Road.

Contentious politics is an enormously interesting and productive component of contemporary social science. The evolving situation of contention in Thailand seems tailor-made for a detailed analysis by researchers within this tradition. I’d love to see a research paper that extends McAdam-Tarrow-Tilly’s Dynamics of Contention by providing a detailed “tagging” of the development of these protests in terms of the chief social mechanisms of mobilization and contention that these authors highlight — escalation, brokerage, identity shift, radicalization, convergence, and framing, for example. And unlike the unfolding of the Solidarity Movement in Poland in the 1980s, Thailand’s current contention can be investigated pretty deeply just using the tools available on the desktop: Google, Twitter, Blogger, Facebook, and access to virtually every newspaper worldwide.

MTT make an important point throughout their treatments of periods of contention: the deeply contingent nature of social contention. We can explain many of the component processes of an uprising. But we can’t discover “laws” of uprisings that would permit confident predictions of outcomes. And this point about contingency seems especially compelling today: even knowing the basic intentions and resources available to the various parties in Thailand today, it is impossible to predict with confidence what the next few weeks will bring. Will the government decide to use the coercion option? Will this succeed — will security forces obey orders to use force against civilians? Will the exercise of force provoke even more powerful expressions of unrest? And if the government decides to continue its current policy of restraint — will the current redshirt movement simply gather more and more steam, will it take over important government buildings and television stations, will it be in a position to forcibly bring about a change of government and the return to power of Thaksin? Or will even more surprising turns of events emerge, outside this range of more-or-less foreseeable contingencies?