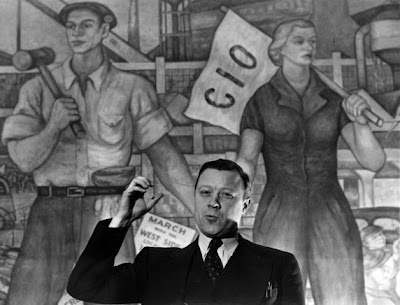 Regions are highly complex social formations: millions of people, thousands of businesses, hundreds of non-profit organizations, and lots of problems.  Some problems are relatively simple to deal with.  If the local river is being polluted by sanitary system overflows during heavy storms, the solution is costly but straightforward: the region needs to invest in a sewer separation infrastructure project.

What is more difficult for a region to handle is a situation where it is confronted by a complex of problems that are substantially inter-related and that fall outside the scope of traditional policy-making organizations.  These are sometimes referred to as “wicked” problems, and they are difficult both scientifically and practically.  They are difficult scientifically because it is hard to trace the various interlinked forms of causation that have created the problem.  And they are difficult practically because their solution requires the cooperation of groups and actors whose interests and understandings of the situation are often at odds.  And this cooperation may need to persist over a very extended period of time — longer than the attention span of many of the politicians, business leaders, and university presidents who have taken an interest in the problem.

Take the problem of job losses in the Detroit metropolitan region.  This is a situation that is caused by a complex set of conditions and occurrences of long and short duration: business decisions about plant closings, national trends in consumer behavior, the financial crisis of 2008, family traditions of college attendance, cultural expectations about blue-collar and white-collar work, patterns of racial segregation, fiscal problems for state and local governments, and deterioration of the natural and built environment.  This problem is particularly difficult to deal with for several important reasons:

Solutions that have been proposed include —

But notice this important fact: these recommendations do not add up to a coherent and actionable strategy.  This is true for several reasons.  The relationship between the factor and the intended result is not a certain one in any of these cases; the actors who would need to take concrete actions in order to bring the factor into being are different in most of these cases; each intervention is costly, so we can’t actually do all of these at once; the operational timeframes of these strategies are very different, from months to decades; and some of the strategies here would interfere directly with the efficacy of others.

More abstractly, interventions that might have a positive effect on employment may be difficult to achieve for a number of different reasons:

It seems evident that a region that faces “wicked” and strongly interlinked problems like these needs to manage to create a plan for addressing the problem and a coalition of actors who have the resources and decision-making authority to take the steps specified by the plan.  The plan needs to be based on the best possible analysis of the economic and social effects of various interventions, based on sound social science and social policy analysis.  The actors might include: a group of legislators and the governor and mayor; multiple business groups; a cohesive set of labor leaders; and a few regional foundations which are prepared to commit significant resources to the plan.

Every step of this description poses new challenges for the region, because essentially we are faced with a public-goods problem at the level of a large, complicated public with a number of independent actors: there are costs associated with the formulation of a plan and the marshalling of a coalition, and the benefits of the effort will be broadly shared by the public as a whole.  So no single organization or actor has an incentive to play the lead as agent of change, and the incentives for collaboration are weak as well.

This is where “leaders” come in.  One would hope that a region has a cohort of individuals and organizations with a specific set of characteristics:

The traditional categories of leaders are easy to understand.  Their positions might include “elected official,” “corporate CEO,” “non-profit CEO,” “foundation president,” “newspaper publisher,” “labor leader,” or “university president.”  These individuals stand at the head of formal organizations, and their organizational positions give them ready-made channels of influence on public policy.  Their experiences in leading their organizations may also give them a degree of insight into how to approach the broad problems that a region often faces — disaster recovery, loss of major industries, a rising trend in social or ethnic conflict.

Some of these leaders are officially charged with the responsibility of formulating strategies and policies that will assist in the solution of problems; so mayors and governors need to be actively involved in the formulation of plans for dealing with these sorts of challenges.   But most of these leaders are not charged in this way; instead, their formal responsibilities include specific organizational goals: “maximizing stockholder value,” “achieving the philanthropic goals established by the board of directors,” “increasing readership and advertising revenues,” “protecting the interests of the members.”  There will always be a wide distribution of balance points between private and public interest that are chosen by these leaders; some are more public-spirited, and some are more single-minded about the interests of the organization they lead.

In addition to these traditional categories, there are sometimes leaders in a complicated community who don’t fit into the usual boxes.  They don’t have executive authority in corporations, foundations, or labor unions, and they aren’t elected to positions of official leadership.  What they do have is a set of assets that fall in the category of social capital:

We might call this kind of leader a “high-level socially connected broker” (HLSCB) — a person who is well positioned to broker relationships among other powerful “elite” actors.  The influence these leaders wield does not derive from the dollars they can commit from their own organizations (foundations, corporations), or the votes they can marshall (labor unions, student organizations), or the direct legislative influence they can wield (lobbyists, large law firms, business associations).  Instead, their influence stems from ideas, passion, and relationships, and their ability to facilitate durable collaboration among actors with somewhat divided interests.  The size of the rolodex is a measure of the density of the networks within which this actor functions; the HLSCB is unusually rich in a set of network relationships that permit him/her to make contact with an unusually large number of other influential actors.  And the HLSCB has a set of personality characteristics that lead him/her to make use of the networks and personal charisma he/she possesses to form working coalitions dedicated to solving difficult problems.  These leaders can be successful in helping a region address its wicked problems — and perhaps more successful than the more traditional varieties of leaders are likely to be.

Why is this an interesting set of topics for UnderstandingSociety?  For several important reasons: it casts a spotlight on some of the most difficult types of problems that a region can face; it highlights some of the reasons that actors in a single sector are unlikely to be able to solve such problems; it underlines the question of motives and incentives for leaders and stakeholders that plague efforts to solve these types of problems; and it postulates one of the conditions that may be most important for securing meaningful collaboration around efforts to solve these large problems.  And it would appear that the broker-leader is one of those ingredients for successful collaboration.