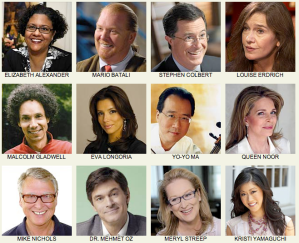 PBS is running a program this month called “Faces of America” (link), hosted by distinguished African-American Studies professor Henry Louis Gates, Jr.  The program focuses on a handful of celebrity guests, a genetic profile for each, and then a variety of “surprising” discoveries about the genealogies of various of the guests.

What I found surprising and jarring in viewing Episode 3 is the degree of essentialism about race the script seems to presuppose.  Gates’s script seems to suggest that one’s racial or ethnic identity is a function of one’s genotype and one’s ancestral (though unknown) history.  At one point Professor Gates has a discussion with Kristi Yamaguchi, the Japanese figure skater.  Pointing out that her genetic profile indicates descent from a particular genetic group that originated in far northern Asia some hundred thousand years ago, he makes a joke to the effect that perhaps her skating talent is a reflection of her ancestry in an extremely cold climate.  It’s a joke, of course; but it is a telling one.  It conveys the idea that genes make the person; that one’s biological ancestry constitutes one’s race or ancestry and one’s current characteristics.

What is surprising about this biological essentialism is the fact that most scholars who think deeply about race have decisively concluded that race is not a biological category but a cultural one.  A person’s race is socially constructed, deriving from the cultural communities in which he/she was formed and not primarily from his/her genotype or biological ancestry.  Population geneticists find that there is as much genetic variation within a “racial” group as across racial groups; which seems to imply directly that the race of each group is not determined by the genetic profile of the group.  Instead, racial or ethnic identity is created by the cultural environment in which one forms his/her most basic psychological dispositions.

The American Anthropological Association has had good reason to think deeply and critically about the concept of “race.”  In 1998 the AAA released a careful statement on race.  Here are a few specific claims included in the statement:

In the United States both scholars and the general public have been conditioned to viewing human races as natural and separate divisions within the human species based on visible physical differences. With the vast expansion of scientific knowledge in this century, however, it has become clear that human populations are not unambiguous, clearly demarcated, biologically distinct groups. Evidence from the analysis of genetics (e.g., DNA) indicates that most physical variation, about 94%, lies within so-called racial groups. Conventional geographic “racial” groupings differ from one another only in about 6% of their genes. This means that there is greater variation within “racial” groups than between them. In neighboring populations there is much overlapping of genes and their phenotypic (physical) expressions. Throughout history whenever different groups have come into contact, they have interbred. The continued sharing of genetic materials has maintained all of humankind as a single species.

At the end of the 20th century, we now understand that human cultural behavior is learned, conditioned into infants beginning at birth, and always subject to modification. No human is born with a built-in culture or language. Our temperaments, dispositions, and personalities, regardless of genetic propensities, are developed within sets of meanings and values that we call “culture.” Studies of infant and early childhood learning and behavior attest to the reality of our cultures in forming who we are.

It is a basic tenet of anthropological knowledge that all normal human beings have the capacity to learn any cultural behavior. The American experience with immigrants from hundreds of different language and cultural backgrounds who have acquired some version of American culture traits and behavior is the clearest evidence of this fact. Moreover, people of all physical variations have learned different cultural behaviors and continue to do so as modern transportation moves millions of immigrants around the world.

So fundamentally, my reaction to the “Faces of America” script is that it seriously misrepresents the social reality of race and ethnicity, implying that identity follows from biology.  Now, of course Henry Louis Gates, Jr. is perfectly well aware of this view of the status of the category of race; he is in fact one of the country’s leading thinkers on this subject.  So it is surprising that he would have permitted the simplistic version of the facts of race, ethnicity, and ancestry that the series conveys.

The most convincing voice I heard in the program was a statement by Ojibwe novelist Louise Erdrich who declined to undergo the genetic screening for the program.  Her explanation of her thinking, roughly, was that her Ojibwe identity was constituted by her experience of family and community, not by ancestry; and she preferred not to confuse that identity by conflating it with facts about her distant ancestors.

The point I am making here is not that the genetic techniques to which the program refers are scientifically invalid; I would be willing to assume that there is good science behind the inferences from one person’s genotype to conclusions about distant ancestry (including the gimmick of discovering that several of the guests have an ancestor in common).  But my point is that this doesn’t tell us anything at all of much interest about race or ethnicity; these are cultural constructs rather than biological facts.

Personally the conclusion I would rather come to goes along these lines: our genotypes matter very little to our current experience and social location.  The origins of our most distant ancestors is of some scientific interest but not much social significance.  If we take pride in being “Asian-American,” “Irish,” or “African-American,” it is because we have had specific social, family, and community experiences that lead us to identify with those groups and to give special importance in their struggles and achievements through history.  The child who was a foundling in New York in 1900 and was raised in an Irish-Catholic family is no less Irish and no less Catholic if it turns out her father was an Italian anarchist and her mother was a Swedish Protestant.  It is the particular communities into which we have socialized that constitute our identities, and I think that extends to racial and ethnic identities.  Of course, some readers may think that this perspective also leads to somewhat paradoxical conclusions — for example, the foundling who is “Irish” without a bit of Celtic ancestry, or that one could be Native American without any tribal ancestry.