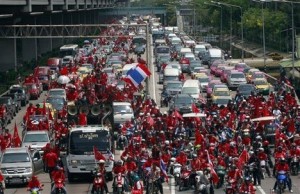 The redshirts in Thailand have moved onto the world stage in the past several months.  Massive protests in Bangkok have stymied the Thai government and have held the army and police forces at bay for months.  Demands from redshirt leaders and posters include removal of the military-backed government of Prime Minister Abhisit and a commitment to prompt elections.  In the background seems to be a demand for a shift in the playing field in Thailand, with meaningful attention to social inequalities.  And exiled former prime minister Thaksin plays a continuing role in the background, offering video messages at protest meetings and veiled instructions to redshirt demonstrators.  Efforts at clearing the protest encampment led to dozens of deaths in April, and a major crackdown this week seems to have succeeded in breaking the protest in Bangkok with another handful of deaths and a great deal of arson in the center of the city.  But there are indications that protests and violence may spread to other parts of Thailand.

What all of this implies is the presence of a major social movement in Thailand, supported by many thousands of rural and urban Thai people, mostly from the lower end of the socioeconomic order.  This much is clear through the journalism that has developed around the current turmoil.  What we haven’t yet seen, though, is a careful analysis of the dynamics and processes of this movement.  How is it organized?  How are followers recruited?  What resources are leaders able to call upon?  What are the grievances that motivate potential followers?  The time is ripe for a careful, analytical study of the movement.  And intellectual resources exist for such a study, in the form of the extensive literature on social movements and contention that exists in the current social science literature.  However, that literature largely focuses on social movements in the democratic West, and scholars in this tradition generally lack deep knowledge of the politics of Asian countries.  So we need to find ways of crossing boundaries if we are to make use of social movement theory in the context of the Redshirt movement.

One of the most important voices in the current literature on social contention is Doug McAdam.  His study of the black insurgency in the United States is a sophisticated and extensive analysis of the dynamics of the US civil rights movement in the South (Political Process and the Development of Black Insurgency, 1930-1970

), and perhaps there are some parallels between the two movements.  McAdam’s work is entirely focused on examples of protests and mobilization in the United States.  But in the introduction to the second edition of this work he provides a clear and powerful statement of the state of the field, and his synthesis of the best current thinking about how to analyze social movements is of general interest.  So perhaps this is one place to begin the search for an empirically and theoretically informed study of the Redshirt movement.

Here are a few of McAdam’s central points.

Increasingly, one finds scholars from various countries and nominally different theoretical traditions emphasizing the importance of the same three broad sets of factors in analyzing the origins of collective action.  These three factors are: 1) the political opportunities and constraints confronting a given challenger; 2) the forms of organization (informal as well as formal) available to insurgents as sites for initial mobilization; and 3) the collective processes of interpretation, attribution and social construction that mediate between opportunity and action. (viii)

Or in short: political opportunities, mobilizing structures, and framing processes (viii-ix).  Here are brief descriptions of each of these axes of analysis.

Expanding political opportunities.  Under ordinary circumstances, excluded groups or challengers face enormous obstacles in their efforts to advance group interests….  But the particular set of power relations that define the political environment at any point in time hardly constitutes an immutable structure of political life.  Instead, the opportunities for a challenger to engage in successful collective action are expected to vary over time.  It is these variations that are held to help shape the ebb and flow of movement activity. (ix)

Framing or other interpretive processes. … Mediating between opportunity, organization and action are the shared meanings, and cultural understandings — including a shared collective identity — that people bring to an instance of incipient contention.  At a minimum people need to feel both aggrieved about some aspect of their lives and optimistic that, acting collectively, they can redress the problem. (ix-x)

So how can these basic sets of questions help in forming a careful analysis of the Redshirt movement?  McAdam’s general point is that these angles of analysis have emerged as key within dozens of studies of collective action and social movements.  They represent an empirically informed set of theoretical perspectives on collective action.  We shouldn’t look at these three sets of factors as setting a blueprint for collective action; but it is a good bet that new instances of social movements will involve each of these factors in some way.

Putting the point another way: we can read McAdam’s synthesis as posing a research framework in terms of which to investigate a new example of a social movement — whether the Falun Gong in China, the monks’ movement in Burma, the Maoist insurgency in India, or the Redshirt movement in Thailand.  It is certainly possible that a given case won’t fit very well into this set of questions; but McAdam’s hunch is that this is unlikely.

So it would be very interesting to initiate a careful study of the Redshirt movement along these lines.  Such a study would need to review the shifting circumstances of political power over the past ten years or so in Thailand, both at the national level and at the state level.  Certainly the military overthrow of the Thaksin government created “ebbs and flows” of the sort to which McAdam refers.  And the Yellowshirt demonstrations of 2008 also shifted the fields of power in Thailand.  What openings did these various events create for Redshirt mobilization?  Second, we would need to know a great deal more about the local and regional organizations through which Redshirt mobilization occurs.  What are those organizations?  What resources do they control?  How do they manage to succeed in mobilizing and transporting many tens of thousands of rural supporters to the center of Bangkok?  And how do they manage to continue to supply and motivate these supporters through several months of siege?  Finally, and most importantly, we need to know much more about the mentality and social identities of the Redshirts.  What do they care about?  What are their local grievances?  What are their most basic loyalties and motivations?  McAdam points out that most studies of successful social movements have found that activists and supporters usually possess dense social networks and deep connections to their communities; will this turn out to be true for the Redshirt movement?

There is a cynical reading of the movement that would almost certainly not stand up to this kind of careful analysis: the idea that the Redshirts are simply the pawns of Thaksin, and that Thaksin’s financial support to individual followers is sufficient to explain their behavior.  This doesn’t seem credible on its face; it makes the movement out to be an automaton controlled by a distant leader.  Surely Thaksin plays a role; but equally certainly, leaders and followers have their own issues, agendas, and passions.

The kind of study suggested here does not yet exist, so far as I can tell.  It would be necessary to pull together a great deal of local knowledge about the social constituencies and local organizations that are involved in the movement — information that isn’t presented in any detail in the journalism that has been offered to date about events in Thailand.  But once a researcher has pulled together preliminary answers to questions in each of these areas, he/she will be much better positioned to answer pressing questions of the day: will the movement survive the repression in Bangkok this week?  Will it spread to other locations in Thailand?  Will the government succeed in preserving the status quo?  And schematic answers to these questions would provide a much more substantial basis for understanding the movement and its location within Thai society.

Here is one small contribution to the effort.  McAdam emphasizes the importance of “identity shift” in the evolution of a social movement.  He thinks that a very substantial part of a movement’s strength and staying power derives from the new forms of collective identity that it creates.  There is evidence of shifting identities along these lines within the Redshirt movement.  Consider this interesting analysis of language from Thailand’s Troubles:

ไพร่, which sounds like prai, was a dusty word which rarely saw the light of day. Now on every other t-shirt worn by people of the Red movement printed large and proud is prai.

Prai has perhaps a dozen meanings including cad, citizen, plebian and proletariat. In the context of the Red movement protest, which includes an element of class conflict and rebellion over inequality, prai frequently means commoner and peasant.

This sounds quite a bit like a shift of identity, from disregarded poor person to proud member of a movement.

(Several earlier posts have focused on events in Thailand.  Here is a post from about a year ago on civil unrest in Thailand.  See also the social movements thread in UnderstandingSociety.)

3 Replies to “Red shirts as a social movement”