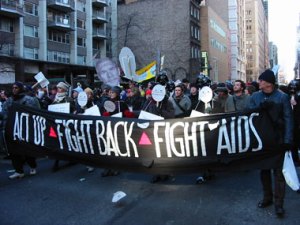 There are several different moral and practical stances that people can take in relation to their social worlds.  The scenes above depict one of these possibilities: vociferous protest and active opposition to specific social and political policies.  Individuals and groups have ideas about justice and legitimacy.  And they have specific material interests that are affected by state policies.  When their values and interests are offended by the actions of their government or other collective actors, they may choose to mobilize around overt opposition and collective action.  Street demonstrations, protests, boycotts, and destruction of property may be the result.  Anti-globalization protests in Toronto in 2010, anti-war protests in 1968 and 2004, demands for aggressive AIDS policies in the 1990s, anti-racism protests in 1968, French protests against President Sarkozy’s policies in 1999, and anti-NATO protests in Strasbourg in 2009 — each scene represents an extensive movement against the actions of governments, international organizations, and social institutions.

What are some of the goals of public protests?  One is obvious: to exert direct pressure on governments and other powerful organizations to change their policies and actions.  Organizers and followers often have very concrete goals in mounting a protest, with an explicit theory of how the protest action will lead to the possibility of change of policy.  This is most evident in the demonstrations that took place in France in 2009 in opposition to the government’s neo-liberal economic reform policies.  Organizers, organizations, and unions had very specific notions about how mass protests in Paris, Dijon, Marseille, and Lyon could succeed in forcing the government to retreat.  In this case the action is purposive and instrumental: choose this strategy to bring about that result.

Another possible goal is more expressive than this description would suggest.  People may mobilize around a demonstration out of their simple desire to express their moral dissent; to offer a moral example to the world of the wrongness of the targeted policy.  Some strands of the US civil rights movement had this character; demonstrations served to cast a light on the fundamental injustice of US race relations and laws, and many supporters participated simply out of moral solidarity with these values.

A third possibility combines the expressive and instrumental types of collective action.  Leaders and followers invested in a particular issue may want to publicize their values and their critique in order to persuade the broader public to share these values.  So a goal of the demonstration is to illustrate the moral and political values that are involved, and to attempt to sway other citizens to share these values.  This was part of Martin Luther King, Jr.’s theory of change: a strategy of non-violent protest could change attitudes throughout the country and eventually lead to very substantial change in law and practice.  It also seems to be a part of the transnational movement of activists against neo-liberal globalization: help the mass of citizens of the developed world to see the harms created by the neo-liberal regime.

The occurrence of protest and demonstration is a commonplace.  But it is also a central focus of scientific study by scholars such as Charles Tilly, Sidney Tarrow, or Doug McAdam under the topics of social movements and social contention. Here are several important recent contributions.  Tarrow and Tilly published Contentious Politics

focuses on the anti-globalization protests that have occurred since Seattle’s WTO meetings in 1999. McAdam’s Political Process and the Development of Black Insurgency, 1930-1970

offers a detailed analysis of the mobilization processes that culminated in the US Civil Rights movement.  Each of these works, and dozens of others, have offered careful insights and theories about the mechanisms of social mobilization.

Social scientists have focused on several aspects of protest movements: for example, motivations of the followers; social characteristics of followers; characteristics of leaders; the organizations that serve to mobilize and coordinate protest; the networks of information and other resources that link separate organizations together; the nature of the grievances that stimulate prolonged protest movements; and the efficacy of protest movements.  Quite a few important ideas have come out of these research efforts.  For example, Charles Tilly introduced the important idea of “repertoires” of protest, making the point that different communities have developed different scripts for presenting their protests to the public and to the government.  And Tilly, Tarrow, and McAdam have argued for an innovative approach to the study of contention, in the form of a methodology of the range of social mechanisms that can be identified in a variety of instances of mobilization.

One important fact that comparative study of protest movements and organizations demonstrates, is the common feature of diversity of purposes, goals, and strategies among the individuals and groups who support a movement.  The US anti-war movement is a good example; the coalition that came together to create large demonstrations and public actions in various cities in the 1960s commonly represented a very wide range of political perspectives and goals, from Quakers to Progressive Labor activists.  This range of political positions reflected significant disagreement about the goals of protest; but it also represented serious disagreement about the strategies of protest as well.

A crucial dividing line among anti-war organizations was the use of deliberate destruction of property as a tool of protest.  Probably the majority of individuals and groups opposed the use of violence, whereas small organizations deliberately sought out opportunities for “trashing”.  The slogan, “Days of Rage,” captures this perspective.  This same divide was evident in the G20 demonstrations in Toronto last month, with Black Bloc activists deliberately finding opportunities for burning police cars and smashing shop windows.  (Here is a manifesto from the Wombles on the subject of violence in demonstrations.)  Peter Ackerman demonstrates in Strategic Nonviolent Conflict: The Dynamics of People Power in the Twentieth Century

that non-violent protest has a very wide range of strategies at its disposal, and that these mechanisms have often proven very effective in achieving the goals of the protest.

(Quite a few earlier posts have focused on examples of social mobilization and theories of how groups become engaged in collective action; these can be found in the collective action thread.)

One Reply to “Protest and the politics of dissent”