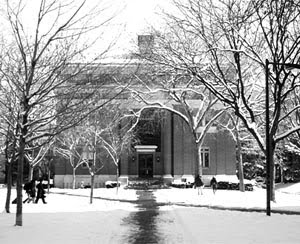 As noted in an earlier post, John Rawls delivered a fundamentally important course on the history of political philosophy at Harvard throughout much of his career. (See the earlier post for more about the course and for a set of notes on the section on Marx.) The 1973 course followed these main topics:

Readers of my post on Josh Cohen’s excellent recent book on Rousseau (Rousseau: A Free Community of Equals) may be interested in these course notes I took as a graduate student in Rawls’s course. Cohen points out how important Rawls’s lectures on this subject were for the formation of his own understanding of Rousseau. The notes are not detailed enough to give a full picture of Rawls’s interpretation of Rousseau; but they give an idea of the issues he highlighted as well as an indication of how he related Rousseau’s views to his own arguments in A Theory of Justice.

Several things stand out upon reading both versions of the lectures. First is a very high degree of consistency between the two years. Rawls clearly worked from a very detailed lecture outline; the same topics occur in the same order, with the same breaking point between lecture 1 and lecture 2. Second, there is a great deal of consistency of content as well. Rawls’s explanations of the general will, the well-ordered society, the central problem of the social contract, and the role of unanimity and voting are essentially the same in the two series. Even a somewhat puzzling statement in 1973 — “The ‘system’ of the world has a general will; its object is the law of nature.” — recurs in 1975: “The law of nature is the general will of the universe.” Third, both series indicate Rawls’s interest in relating Rousseau’s ideas to his own constructions in A Theory of Justice.
Finally, the availability of two independent sets of notes from different years gives some basis for judging Rawls’s meaning at various points. For example, when Rawls asks, “What does the general will will?”, he answers “the public good” and “justice”. But Rousseau doesn’t write that “the general will wills justice”; so we have to ask what Rawls means by this. The fact that he repeats the assertion in both years indicates that he has something specific in mind. And it would appear that the connection in his mind proceeds through the idea of the well-ordered society (again, not a concept that Rousseau uses but one that is critical in Rawls’s own thinking).
A synthesis of Rawls’s lectures on the history of political philosophy over a number of years is provided in Samuel Freeman’s edition of Rawls’s lectures in Lectures on the History of Political Philosophy.

[The following are notes taken by Daniel Little; they were intended to capture Rawls’s formulations of the main points presented in the lecture. Text in red is from the 1975 lectures, and text in black is from the 1973 lectures.]

Rousseau. If inequalities are between property owners and non-property owners, giving rise to political differences, it is hard to see that the have-nots have equal opportunity. Especially if the contract view allows for entrenching of privileged class and restricts equality of opportunity.

Like Locke, Rousseau offers a complex view. We will look at one aspect of the Social Contract, with an explicitly narrow approach.

What does the general will will? The common good — i.e. the good of the public person, just as private will wills the private advantage. The general will wills justice (I.4.4 [ perhaps a reference to TJ I.4, “The Original Position and Justification”]). It wills the preservation of the whole and every part. In the social contract the person only alienates as much of his liberty as is necessary for the sovereign to rule.

Political economy (P114 [perhaps a reference to TJ V.41, “The Concept of Justice in Political Economy”]). The general will wills justice. The Original Position. To ascertain the general will, conditions lead each person to put himself in the place of all others. The general will is therefore the will of all, and applies to all. It must be general in purpose and nature: spring from all and apply to all.

The general will always extends to what is right (but it may be deceived or misinformed).

What does the general will will? It wills the common good, public interest, justice. The general will aims at the preservation and welfare of the whole and every part. This is related to the fact that in the social contract each alienates only so much of his liberty as relates to the community as a whole. This creates authority within limits. (2:4:3) The general will wills justice. It is the most just of wills. To be certain of following the general will it is enough to act justly. Why is the general will right even if not always enlightened? Happiness of everyone qua citizen is wished for by everyone.

In voting no one fails to take “each” to refer to himself. This proves a notion of rights derives from a predilection to oneself. (2:4:4) Qua rational citizens what we are to do is to adopt a certain general point of view. The general will wills justice from adopting the perspective of the citizen as citizen.

By what acts does the general will act? It acts and expresses itself through enactments of basic laws — particularly through decrees that set up fundamental conventions. It can set up privileges, but it cannot decide who gets them by name. The object of the general will is general.

By what acts does the general will act? It acts in the form of general laws and enactments. These are enactments of a constitutional sort: basic legislative agreements; fundamental laws that regulate the form of a regime.

Book II, chapter iii (link). Institutional questions. Under what conditions is it likely that the general will will express itself? No large public interests affecting voting. No coalitions. A vote is a statement of opinion, not an expression of interest or desire. As a vote approaches unanimity it tends to come closer to the expression of the general will.

The original position is a way of articulating conditions for the expression of the general will. The book describes a well-ordered society.

The more these conditions are satisfied, the greater our assurance that the outcomes of votes is an expression of the general will. The more important and serious the matter, the greater the need for unanimity. The social contract must be unanimous.

Last time: What would the conditions have to be for an enactment to represent the general will?

The general will is the will of persons qua citizen. How are we to determine this will? (1) No large private interests should determine action; rather, many small interests which cancel out (II:iii). The notion of the original position is designed to represent the same idea.

One can view the society of the original contract as a description of a well-ordered society. [“A well-ordered society is one designed to advance the good of its members and effectively regulated by a public conception of justice” (TJ chap VIII, sect 69).] What are the characteristics of this view in Rousseau? The general will is not historical, but rather a sociological fact. The conditions of the general will must be expressed in institutional form. Rousseau’s society is a natural rights type of society.

We can supplement Rousseau by trying to see what these principles might be. The principles must satisfy a mutual advantage condition. Rousseau doesn’t explore details, however.

What is Rousseau’s special contribution to contract theory? It is clear in Rousseau that the social contract is not historical; not a sequence of actual agreements, as Locke seems to suggest. Rather, it represents conditions on any well-ordered society.

The general will as an interest that exists in every citizen. It is the basis upon which people decide how to vote or what is in the common interest. It is Rousseau’s view that these conditions are realized and secure.

It is a natural rights view of some sort. Rousseau thinks of society as generating in people as they grow up a general will. That interest then determines their public reasoning. This leads them to act as the general will requires them to act, in conjunction with other interests. The society of the social contract is therefore stable. Rousseau does not discuss what the possible conceptions are of justice. Are they many or few?

Rousseau notes a hierarchy of interests: citizen qua citizen, citizen qua bourgeois, citizen qua individual. The object of the general will is the constitutional form, that of the particular is the individual’s own private goals. The higher interests regulate the lower ones. These interests need to be articulated. There is no contradiction between say willing as citizen to establish a law and say willing as individual to avoid the application of the law in my own case. Rawls’s four-stage sequence in Chapter 4 of A Theory of Justice is designed to provide much the same kind of articulation of interests.

Another notion in Rousseau is a hierarchy of interests. The self is not an aggregate of interests, but rather a structure. We have interests of different orders. Higher order interests are interests having other lower-order interests. E.g. an interest or desire not to have compulsive sensuous desires. To get rid of desire we might take specific actions. Higher order interests in some way regulate the growth of lower-order desires. How does Rousseau use this notion? The general will is the highest order desire. It is not necessarily the strongest; this is a logical characteristic rather than a measure of strength. Highest order desire is the most fundamental; it regulates all others.

We might now discuss Rousseau’s fundamental problem: how to find an institutional form which protects the interests of each with the weight of all and yet also leaves each autonomous and as free as before. We may interpret his solution in terms of justice. (1) Each person alienates himself totally and his rights to the whole community and the public conception of justice. This means everyone gives himself absolutely to be regulated by the public conception of justice. (2) The giving of oneself is unconditional; no one is independent of the normative force of the public conception. (3) In giving oneself to the community, he gives himself to no one. There is no one in a superior relation to him; justice is mutual. (Book 1, chap 6, paragraphs 4, 6-8; link)

The central problem of the social contract may be thought to have the following solution. The problem: How to form an association which protects all without losing freedom. Each totally alienates all his rights and freedom to the whole association absolutely and without qualification. When the association conforms to the general will it is all right. If the association is seen as regulated by the common good, then what Rousseau says can be satisfied.

No one then has any rights except those defined by this conception of justice or the common good. Each person in giving himself to the community gives himself to no one. Everyone does the same, and everyone has the same rights. Giving oneself over to being regulated by the notion of the common good.

I-8: being forced to be free. This addresses a concern with the free-rider problem. People may agree that rules are fair but prefer to be an exception. They can be compelled to comply with fair rules. Justice defines rights and defines equal freedoms.