People sometimes describe India as undergoing an economic miracle in the past twenty years.  After decades of indolent economic growth following independence, a number of sectors of the economy have taken off with high rates of growth and increasing income.  Deepak Lal addresses this assumption in “An Indian Economic Miracle?” (link).  Here is the crucial graph from Lal’s paper:

As the graph indicates, starting in roughly 1980, both GDP and GDP per capita increased at a rising rate, greatly exceeding the disparaging “Hindu rate of growth” of the 1950s and 1960s.  Lal’s paper is worth reading.  But the overall impression is that India is finally moving forward — an impression reinforced by some of Tom Friedman’s comments in The World Is Flat: A Brief History of the Twenty-first Century

However, this impression is very misleading with respect to India’s rural population; or so V. K. Ramachandran at the Indian Statistical Institute argues.  (Here is an interview I conducted with Ramachandran in 2008.)  Ramachandran and his collaborator, Madhura Swaminathan, have pursued an important program of research on village India under the rubric of the Foundation for Agrarian Studies (link).  They and their research teams have conducted a series of village studies over the past ten years that shed detailed light on the economic, social, and caste circumstances of rural India; and the picture they find does not conform to the idea of an “economic miracle.”  Instead, they find patterns of social inequality and social domination that are continuing and increasing; patterns of landlessness that have worsened in the past decade or so; and levels of poverty that continue to challenge the idea of a fully developed human life for many hundreds of millions of Indian rural people.

), and it is worth reading in detail.  This book synthesizes the detailed surveys conducted in three villages in 2005-06.  The authors describe the goals of the Project on Agrarian Relations in India in these terms: to study and analyse …

The villages are small, ranging from 292 households (Bukacherla) to 667 households (Ananthavaram).  Here is a zoom view of Kothapalle village (372 households): 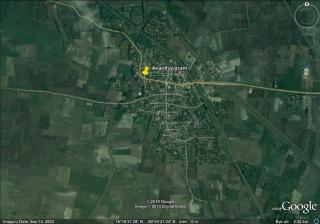 The surveys attempt to capture the important social and economic characteristics of the villages, including population, agricultural practices, social class composition, and caste composition.  Class and caste are particularly important characteristics in the analysis.  The researchers classify households as “landlord — big capitalist farmer — manual worker — peasant — other” (chapter 2). Here is how this classification works out for Kothapalle village:

In other words, about 50% of households are in socially disadvantaged positions (poor peasants, landless workers, and artisans).

Several things are apparent from this summary.  First, the distributions of land and household income are very unequal in all three villages, with a Gini coefficient of .86 for land distribution in Ananthavaram.  The Gini coefficients for the distribution of income hover around .60 for all three villages — a very high degree of income inequality by international standards (link, link)).  And it is interesting to notice that Ananthavaram village enjoys the highest median household income and highest female literacy, but simultaneously the highest degree of inequality of property and income and the highest percentage of scheduled castes and tribes.

Third, female literacy is often regarded as an important measure of overall human development in a poor region or country; and the rates observed by these surveys are quite low (42-47%), with a substantial gap to the rates for male literacy.  Likewise, there are substantial variations in literacy across castes.  Female literacy in Bukkacherla village is 43% for all households but is 28% for Dalit households; 37% for “backward class” households; and 53% for “other caste” households (160).  In other words, the literacy rate for Dalit women is about half that of “other caste” women.

Put the point another way: these village surveys do not support the idea that social progress is occurring rapidly and broadly in India.  Rather, these particular villages support the idea that inequalities in rural India are extensive and possibly increasing; that poverty is widespread; that class and caste continue to determine life prospects; and that human development is impeded by these conditions of inequality and poverty.

It is interesting to consider the question of representativeness that this volume raises.  The studies provide data for only three out of thousands of villages in one Indian state.  So it is productive to ask whether the findings provided here are “typical” of rural Andhra Pradesh — let alone other parts of India.  Ramachandran and Swaminathan have surveyed villages in a number of states, and will continue the project into the future.  Plainly, it is important to bring these micro-studies into relation with other larger-scope studies in order to assess the degree to which these developments are typical of rural India.  The authors do a good job of trying to make these connections using national and state social data sources; plainly, both methods are needed in order to arrive at justified conclusions about the state of Indian agrarian society.

Second, it is interesting to read this report as an exercise in empirical Marxist economics.  The studies are highly empirical and data-rich.  At the same time, the categories of analysis are drawn from Marxist economics: exploitation, class analysis, productive relations, and social relations of domination, extraction, and control.  The report provides a powerful illustration of the analytical value of a Marxian sociology and political economy in this context; relations of power, privilege, and property plainly have a determining role in the processes of social change in rural India today.

(For the interested reader, Ramachandran’s Wage Labour and Unfreedom in Agriculture: An Indian Case Study is an important contribution to the political economy of India.)

(Thanks to Vikas Rawal for corrections on the locations of the villages and images of Kothapalle and Ananthavaram.)

2 Replies to “Village life in India”