I take the view that social causation requires microfoundations. And I hold that meso causal explanations are legitimate. How are these two views compatible?

The key is the role that we expect reasoning about micro-level events to play in the explanation itself. The various versions of methodological individualism — microeconomics, analytical sociology, Elster’s theories of explanation, and the model of Coleman’s boat — presume that explanation needs to invoke the story of the micro level events as part of the explanation. The microfoundations-meso explanation perspective requires that we be confident that these micro-level events exist and work to compose the meso level; but it does not require that the causal argument incorporates a reconstruction of the pathway through the individual level in order to have a satisfactory explanation.

Putting the methodological individualist model of explanation crudely, we get something like this:

Institution {I} shapes individuals’ desires, beliefs, and passions {Ai}; individuals with these features of agency constitute the micro level; the tools of game theory, agent-based modeling, microeconomics, etc., allow us to aggregate the behavior of these individuals back to the macro level, in a new state of the macro level {O}.

The” meso-causal with microfoundations” view goes something like this.

Institution {I} has causal power P to influence future states of social aggregates; {I} occurs leading to P.
And, outside the explanation itself, we have:
[Institution I’s causal powers have micro foundations along these lines: …]

When we explain why the tea kettle begins to whistle, we provide a meso-level explanation and we recognize the microfoundations that each step rests upon:

The kettle is filled with water.
The kettle is subject to a hot flame.
Water boils at 100 degrees centigrade.
Steam is produced at higher pressure than one atmosphere.
Steam exits through the spout, creating the whistle.

This is a meso level physical explanation with very well understood microfoundations, at the level of the molecular properties of H2O, its phase transitions, etc. And, of course, that molecular explanation itself has microfoundations. But here is the key point: the explanation at the level of heat, liquid, boiling point, and steam is perfectly satisfactory for many purposes. And it is scientifically satisfactory because we are confident that we understand the micro mechanisms that underlie each step of the argument. But we are not obliged to provide a molecule-level simulation of the situation in order to be satisfied that we have explained the whistling tea kettle.

Working sociologists offer explanations like Mann’s on a regular basis. They identify what they take to be causal properties of social structures and institutions, and then draw out causal chains involving those causal properties. And often they are able to answer the follow-on question: how does that causal power work, in approximate terms, at the micro level? But answering that question is not an essential part of their argument. They do not in fact attempt to work through the agent-based simulation that would validate their general view about how the processes work at the lower level.

This account suggests an alternative diagram to Coleman’s boat. 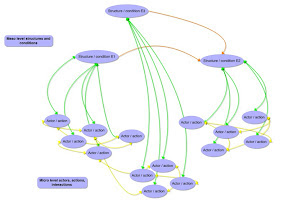 The diagram represents the meso-level claim that E1 and E3 jointly cause the occurrence of E2. The meso causal relation is represented as a single-directional orange arrow. The green arrows represent the microfoundations of each meso factor. These causal relations are bidirectional: individual actors are influenced by the meso factor, and their actions have influences on the meso factor. The yellow arrows, finally, represent inter-actor influences at the micro level: network relationships, alliances, communications channels, exemplary behavior, mobilization efforts, etc.

The diagram represents each of the causal linkages represented in the Coleman boat. But it calls out the meso-meso causal connection that Coleman prohibits in his analysis. And it replaces the idea that causation proceeds through the individual level, with the idea that each meso level factor has a set of actor-level microfoundations. But this is an ontological fact, not a prescription on explanation.

And, finally, it is self-evident that we can always ask a different question that looks more like Coleman’s: how does the causal property of the meso factor work at the level of the actor? But this is a different question, and we aren’t required to incorporate the resulting story into the meso-meso explanation.