We’ve been focusing on the 1 percent and the 99 percent for the past year, thanks to the Occupy movement. But here’s another way of slicing American society — right down the middle. How is the 50 percent doing these days?

The answer seems to be, not very well. And the conservative assault on the social safety net pretty much guarantees that this part of American society will do even worse in the coming years. Poverty is concentrated in this half of America, both adult and child; the percentage of uninsured people is high; and the median income has dropped significantly since 2000. The inequalities that have worsened in the US since 1980 have hurt the bottom half significantly.

Median household income fell 2.3% to $49,445 last year and has dropped 7% since 2000 after adjusting for inflation, the Census Bureau said Tuesday. Income was the lowest since 1996.

Poverty rose, too. The share of people living in poverty hit 15.1%, the highest level since 1993, and 2.6 million more people moved into poverty, the most since Census began keeping track in 1959.

The poverty statistic is stunning: it implies that 30 percent of the bottom 50 percent are officially living in poverty — almost one-third.

So how do the bottom half of Americans do when it comes to health insurance? The Kaiser Family Foundation provides a major data source on rates of uninsured adults by income group (link). Here is a data snapshot for uninsured non-elderly Americans by income: 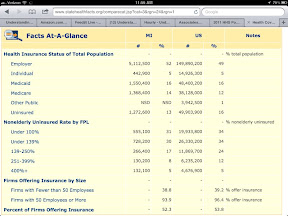 What does this distribution of uninsured status across income imply for the bottom half of Americans? This requires some calculation.  Here are the Federal poverty lines for 2011 (link): 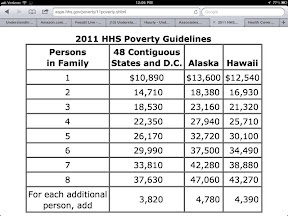 Home foreclosure is another reality in middle income America. Foreclosure has been a reality across full range of the income spectrum since 2008.  But it appears to be more devastating in the bottom half of the income distribution.  (This is evident in Detroit and Southeast Michigan.)

What is our society doing about these basic realities?  Not very much.  And, of course, a major candidate for President is on record: “I’m not concerned about the very poor” (link).  One would hope that the bottom 50 percent think very carefully about which political platform best serves their real interests, including maintenance of a social safety net, aggressive and effective efforts to stimulate job growth, tax reform that requires the affluent to pay their fair share, and preservation of the broadened health insurance coverage promised by the 2010 health care reform legislation.

(Here is a piece in the New York Times on median income; link.)