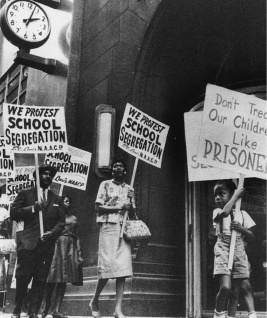 It is apparent that society in the United States is racialized in deep ways that greatly disadvantage the African-American population in the country, from health to longevity to education level to income and wealth levels. The disparities in all these areas of life are well documented (for example, here). Moreover, they seem to be more durable and intractable than those that exist for other ethnic and national minorities in the US.

It is crucial that the social and behavioral sciences do a better job of diagnosing the dynamics and the structural realities of race in the United States.  If we are to reverse these patterns of injustice, we need to understand better how they work.

One key mechanism producing these racial disparities is the continuing fact of residential segregation by race. Elizabeth Anderson, a highly accomplished philosopher at the University of Michigan makes this argument and its consequences very clearly in The Imperative of Integration.  Here is her central finding (summarizing a great volume of social science research):

Segregation of social groups is a principal cause of group inequality. It isolates disadvantaged groups from access to public and private resources, from sources of human and cultural capital, and from the social networks that govern access to jobs, business connections, and political influence. It depresses their ability to accumulate wealth and gain access to credit. It reinforces stigmatizing stereotypes about the disadvantaged and thus causes discrimination. (2)

And here is how Anderson summarizes her conclusions:

I have argued that integration is an indispensable goal in a society characterized by categorical inequality.  It is necessary to block and dismantle the mechanisms that perpetuate unjust social inequality, and to realize the promise of a democratic state that is equally responsive and accountable to citizens of all identities. (180)

Two areas of the social sciences pay particular attention to race in society. One is social psychology, where experts like Claude Steele and many others engage in theoretical and empirical work investigating how people think and act with respect to racial features of the social environment. Steele’s studies of stereotype threat are an important example here (Whistling Vivaldi: How Stereotypes Affect Us and What We Can Do).

But it is sociologists who have given the most comprehensive studies of race in American society. And here it is crucial to observe that there are several fairly different paradigms of thought that have guided sociological thinking about race.

One tradition has tried to frame issues of race within a more general framework of ethnic and cultural groups. The Chicago School of sociology gave voice to this approach, including especially Robert Ezra Park (Race and culture). The idea here is that groups enter society, they struggle for a while, and they eventually assimilate to positions of approximate equality in a complex and open society. The paradigm draws on the experience of various immigrant groups in American history. Distinct ethnic and cultural groups are a fact of life, and the goal of policy should be to find ways of cultivating harmonious relations among them. This is the “race relations” paradigm.

Stephen Steinberg argues in Race Relations: A Critique that this tradition started us off on the wrong foot and has made it more difficult to discover the social realities of the race system in the United States:

While the term “race relations” is meant to convey value neutrality, on closer examination it is riddled with value. Indeed, its rhetorical function is to obfuscate the true nature of “race relations,” which is a system of racial domination and exploitation based on violence, resulting in the suppression and dehumanization of an entire people over centuries of American history. (kindle location 203)

Another important paradigm of race theory begins in a very different place. It emphasizes the inequalities of power and opportunity between majority society and the African-American population over time and it highlights the power relations through which these inequalities have been maintained from slavery through Jim Crow laws into the modern system. Robert Blauner’s Racial Oppression in America offered an important instance of this approach in 1972. This perspective emphasizes the violence and domination that has been the face of the US racial system between white and black citizens. This we can call the “racial domination” paradigm.

The first paradigm fails to pay enough attention to the coercive aspects of the race system in the United States and tends to be “accomodationist”. The second framework emphasizes the role that violence and oppression played (and play) in the subordination of African-American people in many important social structures.  Both frameworks pay attention to the role that prejudice and overt discrimination play in the racial disparities we currently observe, but the second paradigm gives greater attention to domination and a structure of systemic exclusion that is part of the history of race in the United States.  Michelle Alexander’s recent The New Jim Crow is a very good contribution to the second perspective.

An important effort to make a new beginning within sociology on understanding race in the United States has been offered by Michael Omi and Howard Winant in their presentation of racial formation theory in Racial Formation in the United States: From the 1960s to the 1990s.  Winant summarizes much of this new thinking in a review article, “Race and Race Theory,” published in Annual Review of Sociology in 2000.  Here is the text of the article that is posted on Winant’s research webpage.

History and contemporary social realities require that we come to grips with race more honestly than we have in most of our past in the United States. This in turn mandates that we honestly confront the permanent ongoing costs that racialized social structures, including segregation, have imposed on African Americans in the US. We need to have an intellectual framework and narrative that honestly faces these facts, and we need to resolve to correct these injustices within a reasonable period of time.