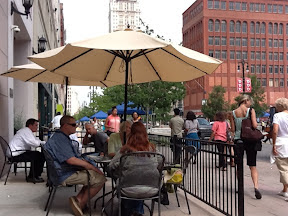 How does a rust belt city relaunch itself? How can the stakeholders of Detroit, Cleveland, or Milwaukee begin to reinvent their cities and get on a track that leads to greater prosperity, health, and educational attainment that can eventually result in opportunity and quality of life for the urban majority?

The factors that led to Detroit’s crisis were extended and multiple — loss of manufacturing jobs, white flight, collapsing city revenues, sudden decline in the public school system, city government mismanagement and corruption, and state and federal neglect, to name several. And the crisis has extended over many decades. Tom Sugrue documents that the seeds of decline began earlier than the standard narrative — white flight was well underway in the 1950s (The Origins of the Urban Crisis: Race and Inequality in Postwar Detroit). The 1967 uprising was a major punctuation mark in the process, but it was an effect as much as a cause of the decline.

So what can be done today? A key part of the puzzle is bringing good jobs back into the city. This is why there has been so much excitement about the decisions by Compuware, Quicken Loans, and Blue Cross/Blue Shield to relocate their headquarters back into the city. The impact is substantial — something like 10,000 jobs have been brought back into the city, with more to come. Along with the jobs comes a flurry of collateral developments — student interns who come to love the city, demand for housing, new restaurants and cafes along Woodward, and a significant multiplier of jobs associated with these new service businesses.

There is a lot of purposiveness in these business developments, with a good portion of civic-mindedness in the mix. These business leaders wanted to make a difference in the city of Detroit, and their decisions about where to locate their companies help to carry this out. There is a deliberate effort on the part of this group of new-economy business leaders to attract innovative companies to the corridor. Detroit has a long tradition of creativity and the arts. Business leaders want to extend this tradition in the direction of innovative high-tech startups that can take root in Detroit. The goals for the Madison Building restortation illustrate this goal — beautiful open-design space for innovative companies that should strike synergies in the coming years. Twitter opened a Detroit office in the building in the spring.

It’s not simply Michigan chauvinism to say that Detroiters are resourceful. This is an important resource for the future for the city. But the people of the city need some concrete things in order to turn their talents into success — jobs, healthcare, decent education, and better urban transportation.

A leading land use planner for one of the auto companies offered a theory about Detroit’s eventual recovery to me about ten years ago. His theory was that the key to success is the recovery of tens of thousands of professional jobs in the core of the city. At its peak in the 1950s he estimated that there were perhaps 150,000 such jobs in the city of Detroit, and this constituted an economic engine for the city through direct and indirect economic effects. At the low point in the 1990s he estimated that this number had fallen to perhaps 20-30,000 jobs — not enough to support the development the city needed. He projected that if the city could return to 80-90,000 well-paying professional jobs, almost all its other problems would be solvable.

The steps taken by major and small companies in the past five years to locate their operations downtown are a very significant step towards that goal. It seems likely that the three major relocations into the city have resulted in 8-10,000 jobs in the city, and these workers are adding a lot to the vitality of the city as well.

So that’s part of the reason why Woodward Avenue is a happening place today. There are appealing cafes along the street serving lunch to workers in the Compuware Building, there is Motown music blasting from an informal market across the street, and there is a sense of a lively urban environment. What will it look like in ten years?