Is the American electorate “polarized” with regard to sets of political issues? McCarty, Rosenthal, and Poole accept the common view that we have in fact become more polarized in our politics over the past twenty years, and they offer an interesting theory of what is causing this polarization in Polarized America: The Dance of Ideology and Unequal Riches (Walras-Pareto Lectures). This theory was discussed in an earlier post. Delia Baldassarri and Peter Bearman take a different perspective, however, in a 2007 article, “Dynamics of Political Polarization” (AMERICAN SOCIOLOGICAL REVIEW, 2007, VOL. 72 (October:784–811)). Here is how Baldassarri and Bearman frame their research:

In this article we provide a parsimonious account for two puzzling empirical outcomes. The first is the simultaneous presence and absence of political polarization—the fact that attitudes rarely polarize, even though people believe polarization to be common. The second is the simultaneous presence and absence of social polarization—the fact that while individuals experience attitude homogeneity in their interpersonal networks, these networks retain attitude heterogeneity overall. We do this by investigating the joint effects of personal influence on attitudes and social relations. (784)

Baldassarri and Bearman quote a range of studies that find that the mass of the US population is not polarized in the bulk of its political attitudes, and that it has not increased in polarization in the past decade. “The evidence suggests that, aside from a small set of takeoff issues, ‘the policy preferences of different social groupings generally move in parallel with each other’” (784). They resolve part of the paradox by distinguishing between activist opinions and public opinion:

In the same vein, Fiorina and colleagues (2005) dispute “The Myth of a Polarized America” and suggest that the “culture war” commonly conjured up in the media is a fictive construction. According to their analysis, there is no popular polarization, but simply partisan polarization—“those who affiliate with a party are more likely to affiliate with the ‘correct’ party today than they were in earlier periods” (p. 25). It is the political elite and a small number of party activists that are polarized.

This all seems a little paradoxical, so it’s worth looking at the assumptions these two groups of researchers are making about “polarization”.

To start, what is meant by polarization with respect to a given issue — say gay marriage? Essentially the concept is a characteristic of a population’s distribution across an attitudinal scale from strongly support to strongly oppose with respect to the issue in question. A population is homogeneous if the distribution of scores has a single peak and a small standard deviation, and is polarized if it has two (or more) peaks. Here is a diagram representing the results of their agent-based model of attitude diffusion. Each issue eventually shows a pronounced degree of polarization after several hundred iterations, with about half the population distributed around a positive attitude and the other half distributed around a negative attitude. Presumably we can define increase in polarization as a shift apart of the two peaks (kurtosis) and perhaps a decrease in the deviation around the peaks. 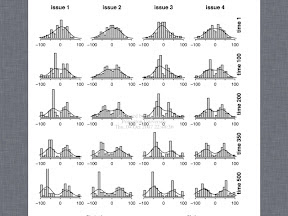 Theoretically a population could be segmented into three distinct groups — perhaps one-third who cluster around the zero point of indifference and two extreme groups on the left and right.

The most original part of their work here is an effort to model the emergence of issue polarization based on a theory of how social interactions in networks and small groups influence individuals’ attitudes. They offer a sociological theory of inter-personal influence to explain how attitude diffusion occurs within a population, and they report the results of network simulations to illustrate the consequences of this theory. They argue that this model explains how members of society can perceive polarity while actually embodying a high degree of homogeneity.

In more general terms, we show that simple mechanisms of social interaction and personal influence can lead to both social segregation and ideological polarization. (785)

Our goal has been to deploy a model of inter-personal influence sensitive to dynamics of political discussion, where actors hold multiple opinions on diverse issues, interact with others relative to the intensity and orientation of their political preferences, and through evolving discussion networks shape their own and others’ political contexts. In the model, opinion change depends on two factors: the selection of interaction partners, which determines the aggregate structure of the discussion network, and the process of interpersonal influence, which determines the dynamics of opinion change. In the next section, we organize the description of the model around these two elements. Table 1 summarizes the simulation algorithm. (788)

The cases resolve into two large groups: non-takeoff, where polarization does not emerge and takeoff, where polarization does occur. The first group is much more common, validating the prior finding that public opinion is not becoming more polarized. The “takeoff” group is much less common but important. For some initial distributions of attitudes and interaction pathways the population does develop IMO two sharply divided sub-groups. These two diagrams illustrate these two possibilities. 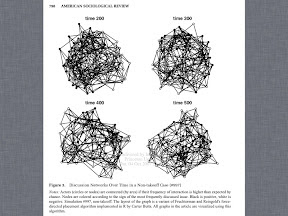 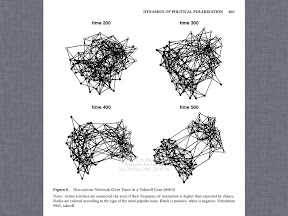 In the second figure the population is moving strongly towards polarization around the issue, whereas the first figure represents a population with no pattern of polarization.

Several things are striking about this work. First is the degree to which it presents a picture of public opinion that seems highly counterintuitive in 2012. The first half of their paradox seems even more compelling today than five years ago — the American public does seem to be very divided in its opinions about social and moral issues. The second striking thing is perhaps an omission in the foundations of their theory of attitude formation. Their model works through 1-1 interactions. But it seems evident that a lot of attitude formation is happening through exposure to the media — television, radio, Internet, social media. There doesn’t appear to be an obvious way to incorporate these powerful influences into their model. And yet these may be much more influential than 1-1 interactions.

This research is of interest for two important reasons. First, it is a sustained effort to account for how issue separation occurs in real social groups. And second, it provides an excellent and detailed example of a microfoundational approach to an important social process, using a variety of agent-based modeling techniques to work out the consequences of the theory of social influence with which they begin. The models allow Baldassarri and Bearman to carefully probe the assumptions of the theory of individual-level attitude dynamics that they postulate. So the work is both substantively and methodologically rewarding. It is analytical sociology at its best.