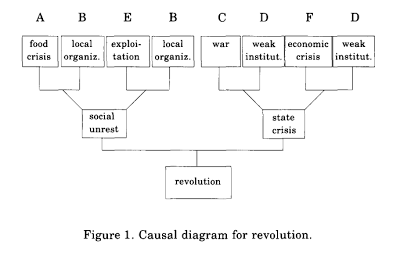 It may be useful to provide a brief account of some of the key ideas that are often invoked in causal explanations in the social sciences. (Here is an earlier post that summarized some current issues in causation research; link. And here are several earlier articles on causal explanation; link, link, link.)

The general idea of a social cause (X causes Y) goes along these lines: X is a structure or feature of social life that varies across social settings and whose presence increases the likelihood of occurrence of Y. The presence of X (perhaps in the presence of Y and Z as well) contributes to processes leading to Y.

This simple formulation contains several hidden assumptions — most importantly, that outcomes have causes, that causes retain their characteristics over time and across instances, and that there are processes or dynamics within the domain of things and processes that convey with some form of necessity one set of circumstances and events onto another.

For example, consider this hypothetical narrative describing a riot in a European city with a large community of impoverished immigrant people:

The associated causal hypothesis goes along these lines: In the context of simmering resentment by immigrant youth and a pattern of mistreatment by police, feelings in the community were unusually elevated by the heat wave. When the arrest occurred a small protest began in the park, which spread to other blocks in the city and eventuated in the burning of cars, smashing of shop windows, and multiple further arrests.

Conditions Ci are standing conditions that played a causal role in the occurrence of the riot. The arrest incident was the instigating event, the match that ignited the social “gasoline”. If any of C1, C2, C3 had been changed six months earlier, it is unlikely that O would have occurred. Each was necessary for I leading to O in the circumstances of the day.  If C1, C2, C3 are present, it is likely that some instigating event will occur in the normal hustle-bustle of urban life. I was the instigating condition. For researchers seeking general explanations of urban unrest, C1 and C3 appear to be strong candidates for common causes across many examples of urban riots. Two mechanisms are invoked here: a mechanism having to do with the individual’s propensity to engage in protest (“resentment and mistreatment elevates propensity to protest”) and a mechanism having to do with the spread of protest (“a small disturbance between a few teenagers and the police escalates through direct contact with other disaffected individuals through the neighborhood”).

An organized and temporally directed account of the occurrence of an event or change, identifying the conditions, circumstances, and events that were causally relevant to its occurrence. A narrative needs to provide empirical evidence for its empirical claims and theoretical justification for the causal mechanisms and processes it postulates.

A condition or circumstance that persists through an extended period of time and that serves as part of the necessary causal background of a given causal process or mechanism. Persistent racial isolation is a standing condition in many explanations of the effects of inner city poverty.

An instigating event is an occurrence, including change of state of some background property, that triggers a change in some other property or process. The early-morning arrest by patrons of a blind pig (unlicensed tavern) in Detroit was the instigating event of the 1967 Detroit riot/uprising.

A condition that must be present in order for a given causal interaction to occur. “If X had not been present, the outcome O would not have occurred.”

A condition (or conjunction of conditions) whose presence suffices to bring about the outcome. “If X&Y&Z were present, then O would have occurred.”

It is worth underlining the point that necessary and sufficient conditions invoke counterfactual statements: If X had not occurred, Y would not have occurred. The logic of counterfactuals (modal logic) has a controversial and unresolved history. But given that causal language always implies some kind of necessity, we cannot dispense with counterfactuals and still have an adequate causal vocabulary.

J.L. Mackie’s work on causation in The Cement of the Universe: A Study of Causation brought to closure a long line of thought about the logic of causal relations, culminating in his concept of INUS conditions. Consider this complex causal statement about the circumstances causing P:

Mackie then defines an INUS condition:

An interlocked series of events and processes that, once initiated by some set of conditions, [usually] brings about a given outcome O. The idea that there are real mechanisms embodied in the “stuff” of a given domain of phenomena provides a way of presenting causal relations that serves as a powerful alternative to the “regularity” view associated with Hume. “Poor performance on standardized tests by specific groups is caused by the mechanism of stereotype threat” (Claude Steele, Whistling Vivaldi: How Stereotypes Affect Us and What We Can Do (Issues of Our Time)). This mechanism is a hypothesized process within the cognitive-emotional system of the subjects of the test. (James Mahoney’s survey article on the mechanisms literature is a good introduction to the debate; link.)

The idea that certain kinds of things (metals, gases, military bureaucracies) have internal characteristics that lead them to interact causally with the world in specific and knowable ways. This means that we can sometimes identify dispositional properties that attach to kinds of things. Metals conduct electricity; gases expand when heated; military bureaucracies centralize command functions. (Harre and Madden, Causal Powers: Theory of Natural Necessity)

A relationship between A and O such that the occurrence of A increases/decreases the likelihood of the occurrence of O. This can be stated in terms of conditional probabilities: P(O|A) ≠ P(O) [the probability of O given A is not equal to the probability of O]. For a causal realist, the definition is extended by a hypothesis about an underlying causal mechanism. [Smoking is a probabilistic cause of lung cancer [working through physiological mechanisms X,Y,Z]. This is equivalent to Wesley Salmon’s criterion of causal relevance (Scientific Explanation and the Causal Structure of the World).

Causal explanation of a singular event

When we are interested in the explanation of a single event, a causal narrative leading up to that event is generally what we are looking for. What led to the outbreak of World War I? Why did Khomeini come to power in Iran in 1979? There are generally two difficult problems facing a proposed causal-narrative explanation of a singular event. First, we need to somehow empirically validate the claims about causal mechanisms and processes that are invoked in the narrative. But since this is a singular event, we do not have the option of using experimental methods to empirically test the claim “X leads by mechanism M to Y” that the narrative proposes. This is one important reason why mechanism theorists have generally required that specified mechanisms have roughly similar causal properties in a range of circumstances. Circumstances embodying the core features of a public goods problem usually lead to elevated levels of free riding — whether in public radio fundraising, strikes, classroom discussions, or rebellions. Second, there is the problem of alternative realizability and multiple causal pathways leading to the same outcome. If the conditions leading to World War I were sufficiently ominous, then whether the assassination of the Archduke or some other event brought it about is of less explanatory importance. Given that potential instigating events occur with a certain probability, some event would have occurred within those few months that led to war. So it is better to identify the standing conditions that made war likely as the causes, rather than the assassination of the Archduke.

We are often interested in answering causal questions about classes of events: Why do peasant rebellions occur? Why does corruption rise to such high levels in many cities? Why do democracies not wage war against each other? Here we are looking for common conjunctions of causal factors that can be shown to be causally relevant in many such events. It is possible that we will discover that peasant rebellions do not have a single set of causal antecedents; rather there are multiple profiles of peasant rebellions, each with a set of causal conditions significantly different from the other profiles.

How can social researchers identify causal relations among social events and structures? There are several groups of methods that social scientists and historians have employed: statistical-causal models, small-N models based on Mill’s methods of similarity and difference (link, link), and case studies and process-tracing methods through which researchers seek to identify and confirm causal relations in individual cases. In each case the method derives from fundamental ideas about the nature of causation: the idea that causal relations between several factors give rise to statistical regularities when we have a large number of cases; the idea that we can use the features of necessary and sufficient conditions to select cases in order to include or exclude certain factors as causally related to the outcome; and the idea that causal mechanisms and processes can often be observed fairly directly in the historical record (Alexander George and Andrew Bennett, Case Studies and Theory Development in the Social Sciences).