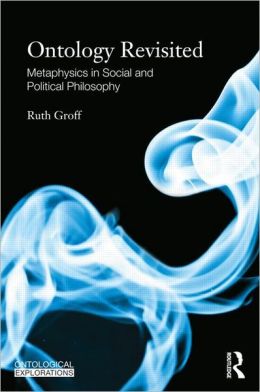 A number of scholars who are interested in causation have recently expressed new interest in the concept of causal powers. This makes sense in a very straightforward and commonsensical way. But it also raises some difficult questions about metaphysics: how are we to think about the underlying nature of reality such that things, events, or conditions have “causal powers”? These questions raise issues that a number of talented philosophers are now taking on in a systematic way. Particularly interesting are recent writings by Ruth Groff, who represents a wave of contemporary thinking in metaphysics that aims to revitalize portions of Aristotle’s views of causation in opposition to Hume’s.

Groff’s work on causal powers is sustained over a number of recent works, including especially her 2012 book Ontology Revisited: Metaphysics in Social and Political Philosophy (Ontological Explorations), her introduction and chapter in Greco and Groff, eds., Powers and Capacities in Philosophy: The New Aristotelianism, and her contribution to Illari, Russo, and Williamson, Causality in the Sciences. Groff emphasizes a broad clash of perspectives between a Humean theory of causation (“constant conjunction, no necessary relations among things or events”) and a neo-Aristotelian theory (“things have powers, powers underlie causal relations among things and events”). Here is how she and Greco put the perspective of the “New Aristotelianism” in Powers and Capacities:

Humeanism is now under serious pressure within analytic metaphysics. In particular, after having been dismissed for generations as so much antiquated animism, the loosely-Aristotelian theorizing of real causal powers has now come to be a major focus of research within the specialty. (kl 204)

Moreover, Groff believes that American social sciences are still largely in the grip of the Humean metaphysics.  In “Getting Past Hume” in Causality in the Sciences, she writes:

One can’t help but wonder what the outcome would actually be, were there to be a floor-fight on the question, i.e., a substantive debate within analytic philosophy and methodology of social science on the merits of Humean anti-realism about causality versus the merits of a powers-based, realist account of causality.

What is significant about all of this for my own argument is not so much that Humeanism continues to be the default ontology of especially American, often positivist, social science; but rather that it can be combined with the idea that it is not — i.e., with the idea that competing versions of regularity theory somehow differ in a deep way, or that it is possible to remain neutral on what causality is, whilst engaging in causal explanation.

This poses a stark contrast; either you are positivist, anti-realist, and Humean or you are anti-positivist, realist, and neo-Aristotelian.  However, it is worth observing that there seem to be two currents of realist thought that reject Humean causation, not just one: the powers ontology that Groff (and Mumford and Anjum in Getting Causes from Powers) advocate; and the causal-mechanisms approach that has been advocated by philosophers and sociologists such as Hedstrom, Elster, and Ylikoski under the broad banner of analytical sociology. One might take the view that the causal-mechanisms approach ultimately requires something like the powers ontology — “How else are we to account for the fact that sparks cause gasoline to explode?”; but on its face, these are two fairly independent realist responses to Hume. And certainly it is difficult to find a neo-Aristotelian predilection among the causal-mechanism advocates.

Groff takes up causal mechanisms theory in “Getting Past Hume” in  Causality in the Sciences. She concedes that this approach — in the hands of Jon Elster and in my own writings, for example — claims to be realist and anti-positivist, in that it rejects the notion that explanation depends on the discovery of general laws. But she doesn’t think that the causal-mechanisms approach actually succeeds in presenting a substantive alternative to the Humean framework on causation: “Upon closer examination, the mainstream mechanisms model is more of the same, metaphysically.”

Fleshing out her argument, she seems to be arguing that causal-mechanisms theory can either retreat to constant conjunction (at the level of the linkages of individual causal mechanisms) or it can press forward to a causal powers interpretation; there is no third possibility. “As with the other models, nothing on the mainstream mechanisms model is in a position of actually doing anything, in the sense of actively producing an effect. Thus here too, with an extra bit of ironic panache, the explanation-form functions as a delivery mechanism (no pun intended) for a Humean metaphysics.” And it is true that most definitions of causal mechanisms make some kind of reference to regularities and repeatability.

My own formulation of the mechanisms theory is one of the targets of Groff’s critique. And in fact I can reconstruct my reasons for thinking that mechanisms need to involve some kind of regularities; and I don’t think it implies a collapse onto Humean causation. (At one point I wanted to call them “pocket regularities”, to distinguish them from the grand social or psychological laws that Hempel and Mill seemed to want to discover.)  I wanted to assert that:

“M [information diffusion] is the mechanism connecting E [police beating] with O [rapid mobilization of an angry crowd]” is a description of a real underlying (perhaps unknown) causal process through which the features of E bring about the occurrence of O.

This is an ontological claim and it is a realist claim. But there is also an epistemic issue: How would we know that M is indeed such an underlying reality? It seems unavoidable that we would need to either produce empirical evidence supporting the conclusion that M frequently conveys these kinds of effects in these kinds of circumstances (the approach Tilly takes) or we need to have a theory of the mechanism which accounts for how it works to bring about the effect. The first boils down to a discovery of a limited set of regularities in a range of circumstances; the latter is a theoretical demonstration of how it works.  So this way of conceptualizing mechanisms does indeed invoke regularities of some sort.  However, it doesn’t agree with the Humean idea that causation is nothing but regularities or constant conjunction. The regularities that are invoked are symptoms of the underlying causal mechanism, not criterial replacements for the mechanism.

Moreover, the powers theory seems to be subject to the same possible objection: how do we know that lightning has the causal power of starting barns on fire, unless we have repeatedly observed the chain of events leading from lightning strike to blaze?

Another thing that demands more attention is an assumption about the implications of the “realism” of powers. What follows from the idea that things have real causal powers? Groff puts the view in these terms: to assert that powers are real is to assert that they are irreducible (kl 204). But that seems questionable. We may think that feudalism was real, while at the same time thinking that its properties and dynamics derived from more fundamental social relations that compounded to create the distinctive dynamics of feudalism. So it doesn’t seem that realists have to also accept the idea of irreducibility of the things about which they are realist. Or to put the point the other way around: the idea that realism implies irreducibility appears to also imply a fairly strong thesis about emergence. Groff returns to this set of ideas in Ontology Revisited, chapter three: “An emergent phenomenon (property or entity) is one that is not equivalent, ontologically, to the plurality of its parts.” And here too she emphasizes irreducibility. But, as Poe Yu-ze Wan shows in “Emergence a la Systems Theory: Epistemological Totalausschluss or Ontological Novelty?” in Philosophy of the Social Sciences, philosophers have differed on the question of whether “emergence” implies “irreducibility” (link). The theory of emergence offered by Mario Bunge does not require irreducibility.

One thing I particularly like about Groff’s work on causal powers is her persistence in working through the logical and conceptual implications of this field. She is painstaking in her effort to discover the implications of various parts of the several theories of causation (and freedom of the will in other essays); and this is exactly how we make progress on difficult philosophical issues like these.