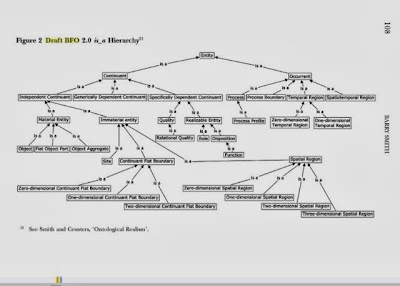 It seems that there is a lot happening in metaphysics these days. There is of course the return to Aristotle that has occurred within the resurgent field of powers ontology in the theory of causation (e.g. Ruth Groff, Ontology Revisited: Metaphysics in Social and Political Philosophy, Stephen Mumford and Rani Lill Anjum, Getting Causes from Powers). But volumes like David Oderberg’s Classifying Reality and Real Essentialism make it clear that the trend is broader than this. And here too, Aristotle is making a come-back.

The issue of realism is as relevant for metaphysics as it is for science. We might want to know whether the particulars referred to by the noun “electron” really exist in nature. Or we might want to know whether the classification system of Maxwell’s electromagnetic theory (magnetic fields, electrical charge, photons, electromagnetic force, …) draws real distinctions within nature — distinctions that divide the stuff of nature at its joints. And finally, we might want to know if reality “really” consists of individuals and properties, or of some other more complicated set of ontological categories.

In Real Essentialism Oderberg proposes a renewed development of Aristotle’s metaphysics as the basis for an answer to these questions:

The aim of Real Essentialism is to rehabilitate some of the core ideas of Aristotelian metaphysics in a contemporary context devoid of the minutiae of historical exposition and textual exegesis (though quite a bit of this will be found in the notes to each chapter). (1)

Here is his statement of essentialism within Aristotelian metaphysics:

At the heart of traditional metaphysics is the thesis that everything has a real essence – an objective metaphysical principle determining its definition and classification. Such principles are not mere creatures of language or convention; rather, they belong to the very constitution of reality. (2)

In his introduction to Classifying Reality Oderberg opens with this setting of the problem; and it might be taken as a proclamation for a new metaphysics more generally.

Is reality classifiable? In other words, does it have boundaries or ‘joints’ that enable us to assign various categories to its different constituents? (1)

As several of the contributors to Classifying Reality point out, there are two broad levels of ontological or metaphysical thinking that we can usefully engage in. First, at the level of the sciences directly there is the question of what kinds of things there are in a specific domain. The ideas of “animate thing,” “vertebrate”, “mammal”, and “horse” arise at this level in the biological sciences.

But there is also a more abstract question that can be posed: what distinct sorts of stuff do we need to allude to in analyzing many or all areas of science? This might be called general metaphysics. We might try to make do with a very spare ontology of particulars and events; or it might be argued that there are distinctions among bits of reality that warrant separate categories. (Here is one such ontology: reality consists of entities, continuents, occurrents, and qualities; (4).) Or we might say that our ontology needs to refer to individuals, properties, relations, processes, and events, and that none of these can be defined in terms of some combination of the others.

In his contribution to Classifying Reality E. J. Lowe observes that analytic philosophers since Frege and Russell have tried to answer the more general question by referring solely to particulars and properties or relations, and have generally tried to understand properties and relations extensionally (as sets of particulars possessing the property). Lowe refers to this simple ontology as a “Fantology” — there are particulars denoted by lower case letters, predicates denoted by uppercase letters, and statements of the form “Fa” (a has the property F).  Lowe favors a renewed attention to Aristotle’s metaphysical theories, arguing that reality consists of primary substance, secondary substance, property or attribute, and individual accident or mode (11). And he believes that the minimalist ontology deriving from Frege (the Fantology) cannot handle the needs we have in creating language for describing the world. Lowe makes use of this more complex understanding of the kinds of things there are in the world to formulate a new version of formal logic. He provides a formalism for expressing the different kinds of statements that can be made within the more extensive universal ontology. “The system of formal logic whose language I have been constructing is meant to be one which respects and reflects certain fundamental categorial distinctions of an ontological nature” (18). What this formulation does not provide is a set of rules of derivation.

Tuomas Tahko takes up the issue of realist metaphysics in his contribution, “Boundaries in Reality.” He believes that there is a basis for asserting that the assertions of metaphysics may be true or realistic; and to do so he addresses the conventionalist arguments that exist against this conclusion. Most generally the conventionalist line is this: there are multiple systems of conceptualization and classification, and there is no “best” system. Therefore there is no basis for concluding that one of these maximal systems is more realistic than another; and therefore there is no basis for metaphysical realism. Here is one version of this view in the words of Achille Varzi:

If all boundaries were the product of some cognitive or social fiat, if the lines along which we “splinter” the world depended entirely on our cognitive joints and on the categories that we employ in drawing up our maps, then our knowledge of the world would amount to neither more nor less than knowledge of those maps. (43)

But Tahko believes that the preponderance of evidence works against the conventionalist view:

We have seen that our system of classification is fundamentally grounded in reality. We can state this with some confidence, as otherwise this system would hardly be so reliable. It is an open question which entities are genuine, bona fide entities; we need philosophical inquiry as well as science to determine this. (60)

Gary Rosenkrantz brings the arguments into connection with biology in his contribution. He believes that there are necessary and essential truths about living things:

I shall argue that the question “What is an animate being?” can be answered by quantifying over ontological categories and natural kinds. (82)

Every such natural kind, K, is such that: (i) it is impossible that something instantiates K contingently, (ii) K is a proper object of inquiry in natural science, (iii) K figures in one or more natural laws, (iv) K is possibly instantiated in the absence of an intention or belief of a contingent being that an instances of K is for performing some goal-directed activity, (v) K supervenes on structural and compositional properties, i.e., necessarily, for any x&amp;y, if x instantiates K and x&amp;y have the same structural and compositional properties, then y instantiates K, and (vi) K places limits on the kinds of parts an instance of K could have. (83)

This is tough slogging. We would like to know if this series of features of “natural kinds” are thought to be definitional or substantive. Is it a discovery about my wedding ring and “gold” that “it is impossible that the ring instantiates ‘gold’ contingently”, or is this just a matter of definition? In other words, why should we accept (i)-(vi) as being true of natural kinds? And this raises a more pervasive question: what kind of philosophical or scientific reasoning is needed to establish truths of general metaphysics?

The diagram at the top is taken from Barry Smith’s contribution to Classifying Reality in which he attempts to construct a “Basic Formal Ontology” — a “top-level ontology that is serving as domain-neutral framework for the development of lower level ontologies in many specialist disciplines, above all in biology and medicine” (101). His account offers a formalized set of relations that can exist between ontological categories: “-is-a-” and “-part-of-“, for example. And he distinguishes between things in terms of their temporal qualities: continuants and occurrents, for example (107), or “things” and “events”.

What I find interesting and worthwhile about Classifying Reality is that it illustrates that there are genuine and important questions within the domain of general metaphysics — questions that are provoked by our ordinary efforts to conceptualize and understand the world around us. What is challenging is to validate the kinds of reasoning that are offered as foundation to conclusions in this field. Does pure philosophy suffice? Do we need to “naturalize” metaphysics in order to have credible theories and conclusions? Should metaphysics simply be considered the most abstract end of the scientific enterprise, ultimately dependent on empirical reasoning and logical deduction? Or is there a realm of autonomous philosophical thinking that can lead to substantive metaphysical conclusions? My own philosophical training makes me wary of that final thought; but the contributors to this new metaphysics are making their best efforts to validate it.