Eric Lipton, Brooke Williams, and Nicholas Confessore have just published a major story in the New York Times on the topic of foreign influence on major think tanks (link), and through the think tanks, on American policy. It is a fascinating and important case study, and it deserves a broad and careful reading.

Here is a fascinating chart summarizing their findings that is included in the print version (but evidently not in the online version). The donor countries are classified by region, and it is possible to then inspect the rough volume of donation coming from each region to each foundation. Reading from right to left, it is possible to infer the regional focus of most of these institutes. 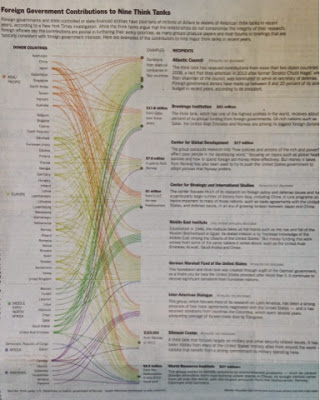 I find this story important for more general reasons than the particular relations and policies that it highlights. There is no smoking gun here, along the lines of a major tobacco company squelching scientific research into the harmful effects of smoking. It doesn’t seem as though these think tanks have substantially breached the requirements of scientific integrity in negotiating funding and assigning research questions. More interesting to me is the light the piece sheds on the structures and sources of bias that exist in the institutions of science and policy formation.

The more general question is the causal significance of influence throughout the world of science and policy formation. We would like to think that important scientific questions like the rate of deforestation and policy areas like limits on Arctic development will be investigated by neutral and diligent scientists. We want their work to be independent and free from conflict of interest. But Lipton, Williams, and Confessore demonstrate that research institutions are susceptible to influence through their sources of funding, just as we have found that pharmaceutical research is often distorted by conflicts of interest. Righty understood, this piece falls within the domain of science studies (link, link).

Charles Perrow’s important book, The Next Catastrophe: Reducing Our Vulnerabilities to Natural, Industrial, and Terrorist Disasters, points out similar forms of distortion in knowledge, science, and policy in the regulatory environment in the United States, including especially the Nuclear Regulatory Commission (link). Perrow makes it clear that both risk assessment and policy formation are significantly distorted by the economic interests and power of some of the actors involved.

If we think about the problem in a large epistemic frame, it is an exceptionally difficult one. There are important and difficult scientific questions to which we need to have answers as a society. These include estimating the acceptable risk levels of arsenic in drinking water, the likelihood of an earthquake at Diablo Canyon, and the probable consequences of hundred-year flooding of the Mississippi River on St. Louis. And there are corresponding questions of policy that depend on the answers we discover to these questions. But neither the science nor the policy design can be done by solitary geniuses working in their garages; instead, organizations must be tasked to do the work. These include universities, research institutes, and think tanks. And there are well understood institutional pressures, both internal and external, that drive the knowledge production enterprise off center. So here is the critical epistemic question: how can we assure ourselves that these institutions will arrive at scientifically justified conclusions without crippling distortions created by the funding and career environments in which they are lodged?

Both science (knowledge creation) and policy (action planning) need to be conducted in a way that is fundamentally guided by the data that the world presents to us and the most honest theorizing we can do in order to make sense of the causal infrastructure of those data. We don’t want the scientists and engineers who evaluate the safety of chemical plants to be in the pockets of the chemical companies, and we don’t want the land-use planning commission in Mississippi River cities to be beholden to real estate developers. Instead, we want neutral, disinterested, fact-driven research and policy design.

But here is the thing: it is flatly impossible to detach the institutions of knowledge and policy from the external realities within which they exist. And those realities include the facts of interests and influence. So it is crucial that we do a better job of embedding these enterprises within institutional and normative systems which honestly confront the distortions and find ways of offsetting them. Universities have well developed standards governing conflict of interest and commitment, and this is a good start. The academic ideals of insulating one’s conclusions from the interests that support the research is another strand of objectivity. And the responsibility of stewards of universities — trustees, presidents, provosts, deans — to protect the academic independence of the faculty of their institution is a third.

The NYT article illustrates yet another important counterbalance to the workings of interest and influence: the ability of a free press to “connect the dots” and to uncover the distorting influence of power and resource that permit privileged entities to advance their interests through the distortion of science and policy. Uncovering hidden forms of influence on science and policy is one of the most important functions of critical journalism, whether in the classic efforts of I. F. Stone or in the most recent work by Lipton, Williams, and Confessore.

None of this is a guarantee of objectivity and neutrality, but it takes us in the right direction.

(Here are earlier posts on the importance and difficulty of “connecting the dots” between a set of economic or political interests and a set of scientific and policy findings; link, link.)