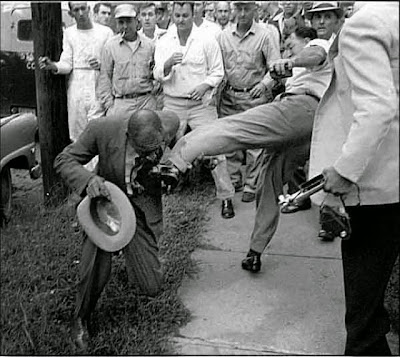 I think of the results of the civil rights struggles of the 1950s and 1960s in the United States as the second American revolution, though a slow-moving one. And it is tempting to think of MLK as one of the founding fathers of this revolution. Is this an exaggeration or a legitimate historical and sociological judgment? Was this struggle comparable in any way to the experience of France in 1789, Cuba in 1953, or Teheran in 1979?

It is true that this period lacked some of the common attributes of a revolution — in particular, it did not lead to regime change or fundamental change in the system of government. But it resulted in a fundamental realignment of power in the United States nonetheless. It profoundly changed the terms of inequality embodied in the race regime of the United States in the first half of the twentieth century. It decisively closed the door on the idea of second-class citizenship for African Americans in the United States, and ultimately for other social and ethnic groups, and it broke up forever the foundations of white power and white supremacy through which this subordination was maintained.

It is important to remember the brutality and comprehensiveness of the system of Jim Crow relations between white and black people that prevailed in much of the United States in the 1920s into the 1950s. The photo above captures this system for me: resistance to demanded forms of subordination was met with physical violence. Jerrold Packard provides a detailed and graphic inventory of the code of the Jim Crow system in American Nightmare: The History of Jim Crow, and Danielle McGuire’s At the Dark End of the Street: Black Women, Rape, and Resistance–A New History of the Civil Rights Movement from Rosa Parks to the Rise of Black Power offers a focused look at the way the Southern racial system worked for women. This system of subordination extended to virtually all forms of ordinary life: employment, residence, politics, family life, education, and ordinary street behavior. And it was a durable system, reproducing itself through generations of assertive displays of white power. (See also C. Vann Woodward’s 1955 book The Strange Career of Jim Crow and Anne Valk and Leslie Brown’s moving collection of oral history interviews in Living with Jim Crow: African American Women and Memories of the Segregated South.)

The civil rights movement challenged every dimension of this system. African Americans of every level of society demanded equality and rights of access to all of the crucial activities of ordinary life: transportation, schools, voting rights, political participation, and the full expression of human dignity. And many thousands of black men and women showed their courage and commitment in standing up to the violence that enforced this system. This includes the famous — King, Parks, Abernathy, Lewis, Malcolm; but it also includes the many thousands of ordinary people whose names are now forgotten but who accepted beatings to register to vote or enroll in segregated schools.

So if a revolution may be described as a fundamental change in the power relations in a society, brought about by the concerted effort of a large-scale collective movement, then indeed, the civil rights movement brought about a revolution in America. Doug McAdam’s fine sociology of American race relations and the civil rights movement is right to call this an insurgency in Political Process and the Development of Black Insurgency, 1930-1970. It was an insurgency that was broadly based, passionately pursued, supported by effective regional and national organizations, and largely successful in achieving its most important goals.

It barely needs saying that this revolution is not complete. Tom Sugrue found a good phrase to capture the story in the title of his recent book, Not Even Past: Barack Obama and the Burden of Race. But further progress will build upon the cultural and structural changes brought about by these courageous and committed ordinary men and women in waging revolution against an oppressive social order.