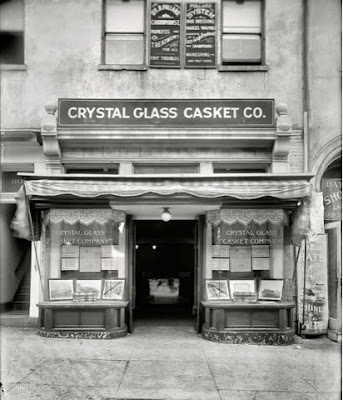 Gabriel Abend has recently published The Moral Background: An Inquiry into the History of Business Ethics, a remarkable book on what seems initially to be a small subject — a history of the academic field of business ethics. I say “seems”, because in Abend’s hands this topic turns out to be a superb subject for the emerging field of the sociology of culture. (I should explain that the subject might seem small to a philosopher, because the discipline of business ethics is low-prestige within philosophy and is generally regarded as too applied to count as “serious” philosophical ethics. For Abend, however, it is an important subject precisely because it is “applied” and because the activity to which it pertains is highly consequential in the contemporary world and the world of nineteenth century capitalism as well.)

Michele Lamont is often cited as the person who gave new impetus to the sociology of culture in the past decade (e.g. in Money, Morals, and Manners: The Culture of the French and the American Upper-Middle Class; link, link). (Lamont is one of the editors of the Princeton series in which this book appears). Lamont has given new energy to the study of how cultural values structure ordinary life in a variety of settings, and also has provided some powerful examples of how to approach this problem empirically. And Abend brings such great detail of focus to his investigation that his study sets a new standard for what is required in a study of public culture. One of the intellectual antecedents of Abend’s approach is the micro-sociology of Erving Goffman. Like Goffman, Abend is interested in tracing the public manifestations of a cultural epoch — not the subjective experience that may underly it.

What Abend wants to understand is the actual history of the field of business ethics. He isn’t trying to discover the patterns of behavior that are found among businessmen, or the ethical ideas they embrace. Rather, he wants to tease out the material and ideological content expressed by professional “business ethicists”, largely found in schools of business. What has been the public expert discourse on business ethics over the past century, and what framing assumptions about the ethical field does this discourse presuppose?

The book scrutinizes the content of business ethicists’ understandings and prescriptions — taking into account their context, the audiences they were addressed to, and the cultural repertoires they drew upon. … Much like sociologists and anthropologists of science, I am interested in the tools, devices, technologies, methods, and tactics business ethicists came up with and avail themselves of. Manuals of proper behavior, success manuals, pamphlets, biographies, obituaries, typologies, illustrations, and codes of ethics are not neutral, interchangeable containers of information. They are social things, with particular causal histories and social functions, and whose particular modes of operation, modes of existence, and materiality must be analyzed as well. (11)

He correctly observes that there are three levels of ethics that can be considered from a sociological point of view:

First, there is the level of behavior or practices. … Second, there is the level of people’s moral judgments in the least, and societies’ and social groups’ moral norms and institutions. … In this book I introduce a third level, which up to now has not been recognized as a distant object inquiry: the moral background. (17)

His interest throughout the book is with the third level, the moral background. This refers, essentially, to the frameworks, concepts, and principles of reasoning that people have in mind when they think ethically or normatively.

Moral background elements do not belong to the level or realm of first-order morality. Rather, they facilitate, support, or enable first-order moral claims, norms, actions, practices, and institutions. (53)

Moral background includes six kinds of topics, according to Abend:

He compares the moral background with the meta-scientific beliefs that scientists bring to the study of nature or society.

What is it that members of a scientific community share, exactly? For one, they likely share many social and demographic characteristics. That helps account sociologically for their having become members of that community in the first place. More important, they have common epistemological and ontological intuitions, dispositions, or assumptions. They agree on how you go about answering a scientific question, and what kind of evidence and how much of it you need to corroborate a hypothesis. (28)

This focus is particularly interesting to me because it provides additional leverage on the problem of offering a vocabulary for the background conceptual resources that are a necessary part of all social cognition. As has been noted several times in earlier posts, there is an important body of conceptual and factual presuppositions that human beings unavoidably use when they try to make sense of the world around them. And the framework itself is only rarely available for inspection. So it is a valuable contribution when sociologists like Abend, Gross, or Lamont are able to pinpoint the content and structure of such systems of tacit cognitive framework in action.
The discussion of conceptual repertoires is particularly detailed and helpful. Abend defines conceptual repertoires as “the set of concepts that are available to any given group or society, in a given time and place” (37). He makes the valid and important point that conceptual schemes are culturally specific and historically variable; “this repertoire enables and constrains their thought and speech, their laws and institutions, and, importantly, the actions they may undertake” (37). He offers as examples of moral concepts ideas like these: “dignity, decency, integrity, piety, responsibility, tolerance, moderation, fanaticism, extremism, despotism, chauvinism, rudeness, …” (38), and makes the correct point that ideas like these show up in some cultural and historical settings and not in others. So the realities that can be “seen” and experienced by historically situated people depend on the schemes or repertoires they have available to them in those settings. (The topic of conceptual schemes has come up frequently here. Here are a few earlier discussions; link, link, link.)

Abend finds two thematic sets of beliefs and concepts that largely serve to characterize most approaches to business ethics, which he refers to as “standards of practice” and “the Christian merchant.” The first approach works on the assumption that ethical standards like honesty are good for business, all things considered, and that the function of business ethics writings and teaching is to help business people come to see that their interests dictate that they should conform, even when there are strong incentives to do otherwise. The second principle argues that there are higher moral standards that govern behavior, and that prudent adherence to rules of honesty does not get to the heart of business ethics. Broadly speaking the first approach is scientific and consesquentialist (JS Mill), while the second is theological and deontological (Kant). (In Kant’s memorable phrase, “tell the truth though the world should perish.”)

Abend demonstrates that the field of business ethics is substantially older than it is usually thought to be, extending back at least a century. To demonstrate this point he makes interesting use of Google’s Ngram tool (link), a research tool based on Google’s massive collection of scanned books, and finds that the phrase “business ethics” begins to take off around 1900, passing “commercial morality” in 1912 and “business morality” in 1917. All the other phrases go into a sustained decline in books from 1920 forward, while “business ethics” takes off. 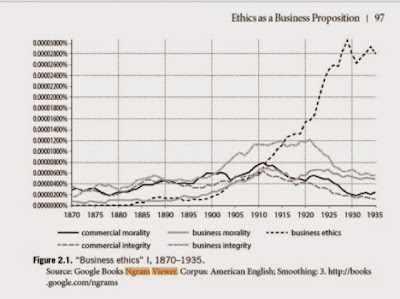 The Moral Background is a major contribution to the emerging field of cultural sociology. Especially important among the virtues of Abend’s research is his ability to work through a huge body of historical material from the subject — the founding of various business schools, speeches by public officials about business scandals, the utterances of pro-business organizations like chambers of commerce, newspaper cartoons about business scandals, philosophical writings about ethical theory — and to find meaning in these disparate sources that point back to the “moral backgrounds” from which they emanate. This is a truly gigantic task of intellectual integration, and Abend’s book sets a high bar for future studies of the cultural meaning of intellectual, practical, and normative social realities.