Does the social world supervene upon facts about individuals and the physical environment of action? Brian Epstein argues not in several places, most notably in “Ontological Individualism Reconsidered” (2009; link). (I plan to treat Epstein’s more recent arguments in his very interesting book The Ant Trap: Rebuilding the Foundations of the Social Sciences in a later post.) The core of his argument is the idea that there are other factors influencing social facts besides these. Social facts then fail to supervene in the strict sense: they depend on facts other than facts about individuals. There are indeed differences at the level of the social that do not correspond to a difference in the facts at the level of the individual. Here is how Epstein puts the core of his argument:

And here is how Epstein formulates the claim of weakly local supervenience of social properties upon individual properties:

The causal story for supervenience of the social upon the individual perhaps looks like this:

The causal story for non-supervenience that Epstein tells looks like this:

But maybe the situation is even worse, as emergentists want to hold: 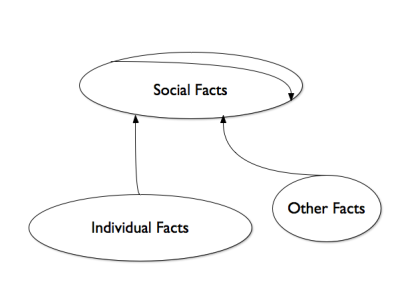 In one sense Epstein’s line of thought is fairly easy to grasp. The outcome of a game of baseball between the New York Yankees and the Boston Red Sox depends largely on the actions of the players on the field and in the dugout; but not entirely and strictly. There are background facts and circumstances that also influence the outcome but are not present in the motions and thoughts of the players. The rules of baseball are not embodied on the field or in the minds of the players; so there may be possible worlds in which the same pitches, swings, impacts of bats on balls, catches, etc., occur; and yet the outcome of the game is different. The Boston pitcher may be subsequently found to be ineligible to play that day, and the Red Sox are held to forfeit the game. The rule in our world holds that “tie goes to the runner”; whereas in alto-world it may be that the tie goes to the defensive team; and this means that the two-run homer in the ninth does not result in two runs, but rather the final out. So the game does not depend on the actions of the players alone, but on distant and abstract facts about the rules of the game.

So what are some examples of “other facts” that might be causally relevant to social outcomes? The scenario offered here captures some of the key “extra-individual” facts that Epstein highlights, and that play a key role in the social ontology of John Searle: situating rules and interpretations that give semantic meaning to behaviors. Epstein highlights facts that determine “membership” in meaningful social contexts: being President, being the catcher on the Boston Red Sox. Both Epstein and Searle emphasize that there are a wide range of dispersed facts that must be true in order for Barack Obama to be President and Ryan Hanigan to be catcher. This is not a strictly “individual-level” fact about either man. Epstein quotes Gregorie Currie on this point: “My being Prime Minister … is not just a matter of what I think and do; it depends on what others think and do as well. So my social characteristics are clearly not determined by my individual characteristics alone” (11).

So, according to Epstein, local supervenience of the social upon the individual fails. What about global supervenience? He believes that this relation fails as well. And this is because, for Epstein, “social properties are determined by physical properties that are not plausibly the properties of individuals” (20). These are the “other facts” in the diagrams above. His simplest illustration is this: without cellos there can be no cellists (24). And without hanging chads, George W. Bush would not have been President. And, later, one can be an environmental criminal because of a set of facts that were both distant and unknown to the individual at the time of a certain action (33).

Epstein’s analysis is careful and convincing in its own terms. Given the modal specification of the meaning of supervenience (as offered by Jaegwon Kim and successors), Epstein makes a powerful case for believing that the social does not supervene upon the individual in a technical and specifiable sense. However, I’m not sure that very much follows from this finding. For researchers within the general school of thought of “actor-centered sociology”, their research strategy is likely to remain one that seeks to sort out the mechanisms through which social outcomes of interest are created as a result of the actions and interactions of individuals. If Epstein’s arguments are accepted, that implies that we should not couch that research strategy in terms of the idea of supervenience. But this does not invalidate the strategy, or the broad intuition about the relation between the social and the actions of locally situated actors upon which it rests. These are the intuitions that I try to express through the idea of “methodological localism”; link, link. And since I also want to argue for the possibility of “relative explanatory autonomy” for facts at the level of the social (for example, features of an organization; link), I am not too troubled by the failure of a view of the social and individual that denies strict determination of the former by the latter. (Here is an earlier post where I wrestled with the idea of supervenience; link.)