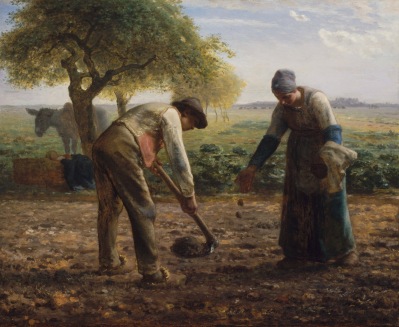 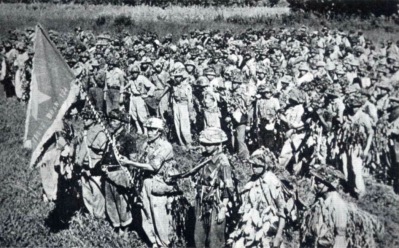 One of Marx’s more important pieces of political writing is the The Eighteenth Brumaire of Louis Bonaparte (1851) (pdf). Here is his analysis of the causes of the specific nature of peasant political consciousness leading to the election of Napoleon III:

The small-holding peasants form an enormous mass whose members live in similar conditions but without entering into manifold relations with each other. Their mode of production isolates them from one another instead of bringing them into mutual intercourse. The isolation is furthered by France‘s poor means of communication and the poverty of the peasants. Their field of production, the small holding, permits no division of labor in its cultivation, no application of science, and therefore no multifariousness of development, no diversity of talent, no wealth of social relationships. Each individual peasant family is almost self-sufficient, directly produces most of its consumer needs, and thus acquires its means of life more through an exchange with nature than in intercourse with society. A small holding, the peasant and his family; beside it another small holding, another peasant and another family. A few score of these constitute a village, and a few score villages constitute a department. Thus the great mass of the French nation is formed by the simple addition of homologous magnitudes, much as potatoes in a sack form a sack of potatoes. Insofar as millions of families live under conditions of existence that separate their mode of life, their interests, and their culture from those of the other classes, and put them in hostile opposition to the latter, they form a class. Insofar as there is merely a local interconnection among these small-holding peasants, and the identity of their interests forms no community, no national bond, and no political organization among them, they do not constitute a class. They are therefore incapable of asserting their class interest in their own name, whether through a parliament or a convention. They cannot represent themselves, they must be represented. Their representative must at the same time appear as their master, as an authority over them, an unlimited governmental power which protects them from the other classes and sends them rain and sunshine from above. The political influence of the small-holding peasants, therefore, finds its final expression in the executive power which subordinates society to itself.

This a particularly interesting analysis of the social psychology of group solidarity, and one that has contemporary significance as well. It sheds a lot of light on how Marx thinks about the formation of class consciousness — even as it significantly misunderstands the agency of rural people.

What are the limitations of the French peasantry, according to Marx here? They are isolated, burdened, unsophisticated, primitive, apolitical, and ignorant of the larger forces around them. Therefore, Marx says, they cannot constitute a unified and purposive political force. (The photo of a battalion of Vietnam Minh troops in Indochina just a century later refutes this conception.)

From this description we can draw several positive ideas about the foundations of collective solidarity. Here are the elements that Marx takes to be crucial in the formation of collective consciousness in this passage:

There are several crucial ideas here that survive into current thinking about solidarity and mobilization. So Marx’s thinking about collective consciousness was prescient. It is interesting to consider where his thoughts about collective solidarity came from. How did he come to have insightful ideas about the social psychology of mobilization and solidarity in the first place? This isn’t a topic that had a history of advanced theory and thinking in 1851.

Two sources seem likely. First is the tradition of French socialist thought in which Marx was immersed in the 1840s. French socialist thinkers were in fact interested in the question of how a revolutionary spirit came to be among a group of people. And second is Marx’s own experience of working people in Paris in 1843-45. He writes of his own observations of working people in the Economic and Philosophic Manuscripts in 1844:

When communist artisans associate with one another, theory, propaganda, etc., is their first end. But at the same time, as a result of this association, they acquire a new need – the need for society – and what appears as a means becomes an end. In this practical process the most splendid results are to be observed whenever French socialist workers are seen together. Such things as smoking, drinking, eating, etc., are no longer means of contact or means that bring them together. Association, society and conversation, which again has association as its end, are enough for them; the brotherhood of man is no mere phrase with them, but a fact of life, and the nobility of man shines upon us from their work-hardened bodies.

Here Marx gives as much importance to the substantive relations of friendship and everyday association as he does to shared material interests in the formation of the class consciousness of French workers.

Marx’s misunderstanding of the political capacity and consciousness of peasant communities has been noted by many scholars of rural revolutions. James Scott once opened a public lecture on the revolutions of the twentieth century by saying that his lecture would only treat the peasant revolutions of the century. But he then paused and laughed, and said, this isn’t much of a limitation, because they were all peasant revolutions! Marx’s assumption that only urban workers were capable of revolutionary consciousness was a serious misreading of the coming century of anti-capitalist and anti-colonial struggles. (Here is an earlier post on Scott’s studies of peasant politics. Scott’s accounts can be found in Weapons of the Weak: Everyday Forms of Peasant Resistance and The Moral Economy of the Peasant: Rebellion and Subsistence in Southeast Asia. Eric Wolf’s Peasant Wars of the Twentieth Century picks up similar themes.)

Also interesting in the Eighteenth Brumaire is Engels’ statement on the law of history as class struggle in his preface to the third edition of the book:

In addition, however, there was still another circumstance. It was precisely Marx who had first discovered the great law of motion of history, the law according to which all historical struggles, whether they proceed in the political, religious, philosophical or some other ideological domain, are in fact only the more or less clear expression of struggles of social classes, and that the existence and thereby the collisions, too, between these classes are in turn conditioned by the degree of development of their economic position, by the mode of their production and of their exchange determined by it. This law, which has the same significance for history as the law of the transformation of energy has for natural science — this law gave him here, too, the key to an understanding of the history of the Second French Republic. He put his law to the test on these historical events, and even after thirty-three years we must still say that it has stood the test brilliantly.

Engels plainly endorses the idea of laws of motion of society and the idea of class conflict as the primary motor of historical change. “History is a history of class struggle.” There is not much room for contingency or conjunctural causation here! But this is a dimension of Marxist theory that is plainly incorrect. Far better is to understand history in a more multi-factoral way in which contingency, conjunction, and agency all play a role.