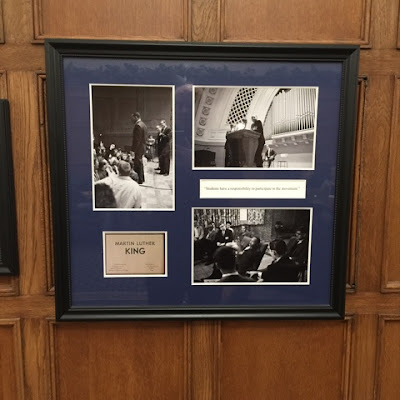 image: photographs of Martin Luther King, Jr. at the University of Michigan, 1962

There are two large categories of factors that are fundamental to understanding social processes — meanings and mechanisms. I’ve given a preponderance of attention to the importance of social causal mechanisms within historical and social explanation (link). We explain a social outcome when we identify the social mechanisms that brought it about.

It is crucial to bear in mind always, however, that there is a complementary dimension to social life and social process — the pervasive fact that people act within frames of meanings and interpretations that they bring to their social relationships and their social worlds. Human action is meaningful action, and we can’t make sense of action without attributing meanings, intentions, and frameworks of understanding and desire to the individuals who constitute a social encounter.
This is not a new insight, of course; it was fundamental to the hermeneutic approach to social life, including the influential thinking of Wilhelm Dilthey (Introduction to the Human Sciences). But the classical hermeneutic approach tended to under-value the importance of causation and mechanisms in the social world; whereas it is clear today that both mechanisms and meanings are inseparably embedded within the social world.
It is in fact misleading to portray mechanisms and meanings as complementary “dimensions” of social change. Rather, we might say that mechanisms depend upon meanings, for the simple reason that mechanisms depend upon actions, and actions presuppose meanings. This is the thrust of my emphasis on “actor-centered” approaches to sociology (link). The actor-centered perspective takes seriously the meanings, values, cognitive and practical frameworks that individuals bring to their interactions in the social world, and it urges social scientists and historians to improve upon their current theories of the actor.
Institutions and organizations are often invoked as causal factors or mechanisms in the production of important social outcomes. But institutions always work by influencing the behavior of the individual actors whom they touch; so either explicitly or implicitly we need to have a theory of the actor’s mental frameworks if we are to understand the causal power of institutions to influence outcomes.
If we want to know why there is grade inflation in universities, we need to refer to some of the institutional mechanisms that influence grading practices (causal influences!), but we also need to refer to the goals and meanings that participants bring to the interaction between students, professors, and appeals committees. Sometimes those mental frameworks are trivial and manifest — students want higher grades for reasons of career success as well as personal validation, faculty want to function in accordance with their responsibilities as neutral assessors of academic performance while at the same time demonstrating empathy for the needs of their students. These interlocking intentions and desires lead to a dynamic movement of average grades over time — sometimes higher, once in a while lower. But sometimes the underlying mental frameworks that drive important social outcomes are more obscure — for example, the disaffection and doubt that leads inner city minority students to despise high school.
Think for a moment about how meanings and intentional actions give rise to a common social mechanism, hate-based nationalist mobilization. A few strident leaders formulate a message of hate against a group — currently, MENA immigrants in various European countries; they find means of gaining access to national media (through provocative demonstrations); and they extend their influence from the tiny percentage of racist extremists ex ante to a sizable percentage of the more moderate population. How does this work? Why do ordinary non-racist citizens fall prey to the hateful messages of the extreme right? Presumably a convincing answer will depend on the specifics of the communications strategies and messages conveyed by the nationalist party, interlocking with an astute reading of the fears and suppressed prejudices of the majority population. In other words, the mechanism of racist mobilization depends on a substratum of political emotion and belief that can be adroitly manipulated by the racist group and its leaders.

Philosophers sometimes distinguish meanings and causes as subjective and objective.(This is implied in Georg Henrik von Wright’s classic book Explanation and Understanding.) But this is not a useful way of thinking about the two categories. Meanings are often fully objective — in the sense that we can investigate them empirically and they can be demonstrated to have stable and enduring effects in the world. And social causes have an element of subjectivity built into them, for the simple reason that social causes always invoke the subjective states of mind of the actors who make them up. It isn’t even accurate to say that meanings exist solely within the actor, whereas causes exist outside the actor. The meanings that Weber identified in the notion of the Protestant Ethic are indeed embodied in a population of individuals (inward); but they are pervasive and influential on those same individuals (outward). So the Protestant Ethic is both an inner state of mind and an external and coercive set of values and beliefs.

(The photos of Dr. King above are relevant in this context because the civil rights struggle of the 1950s and 1960s offers ample examples of meanings and mechanisms in the evolving mobilizations, legislation, cycles of Jim Crow violence, and emerging ideas about Black Power within the African-American community.)