May 20, 2016 By Daniel Little in CAT_globalization Tags: inequality

Inequalities of wealth and income throughout the world have generated a great deal of attention in the  past several years, in both the media and the scholarly world. Thomas Piketty’s Capital in the Twenty-First Century gave this set of debates a huge impetus when it appeared in 2013. Branko Milanovic treats this subject in his very recent book, Global Inequality: A New Approach for the Age of Globalization. (Here is a review of the book in the Financial Times; link.) Some of the core arguments were presented in an earlier World Bank white paper (link). Global inequality refers to the distribution of income over the world’s population as a whole, pooling together the populations of all nations. And, as Milanovic observes, this distribution can be understood as the sum of within-nation inequalities and inequalities of the mean incomes of all nations. Piketty’s analysis is focused on within-nation incomes, and he highlights the fact that many OECD countries are experiencing a rapid increase in inequalities. But Milanovic demonstrates that the picture is quite different for global inequalities, where there has been a significant decrease in inequalities over the past two decades or so.

An earlier post considered and rejected a similar argument in the New York Times by Tyler Cowen (link). Cowen endorsed the idea that the world is becoming more equal in terms of income, and I argued that this conclusion misses the point of current concerns about inequality. It is not the size distribution of the whole world’s population that is of primary concern, but rather the distribution of income within national economies that is of concern. Milanovic provides data supporting a similar conclusion as one part of his analysis. But his arguments are much more substantive and data-rich. And his analysis makes it clear that both trends concerning income inequalities are important.

Milanovic directly addresses the relevant contrast here under the heading of “within-country” and “cross-country” inequalities, or what he designates as class inequalities and location-based inequalities. And, very interestingly, he suggests that the relative importance of the two sources of inequality changes over time, but both are important.

Here is the key graph representing much of the central argument in Milanovic’s book. (Milanovic refers to this as the “elephant” graph.) 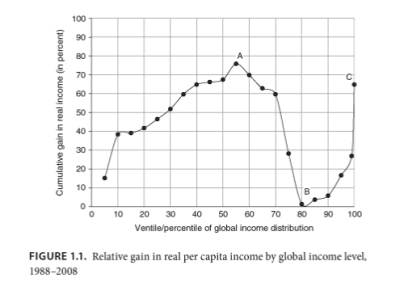 Milanovic thinks the turning points A, B, and C are particularly revealing about important current economic trends (11 ff.). Here is how he analyzes the segments: Point A encompasses people in the emerging Asian economies, with rapidly rising incomes in the middle range. Point B encompasses middle-income workers in OECD countries. And point C is the “global plutocrats” (22). Framed in these terms, Milanovic’s analysis has major implications for global politics and the way we understand the winners and losers of globalization.

The book offers a useful theoretical innovation for development economics. The Kuznets curve was thought to represent a one-time feature of economic development through a process of modernization: the view that inequalities within a national economy increase during the early phase of modernization and structural transformation, and then decline over an extended period of time. The theory seems to be refuted by the sustained period of rising inequalities in OECD economies from the 1980s. Milanovic argues for a revision of the concept by introducing the variation of a Kuznets wave or cycle, or “alternating increases and decreases in inequality” (50ff.). The intervening variable causing this fluctuation in Milanovic’s account is rising per capita income and the new social and economic forces this rising level of wealth creates. Two important elements of this dynamic are the paired forces of rising power in the hands of wealth holders on the one hand and mass organizations like labor unions on the other, leading to a struggle between pro-rich policies and pro-worker policies. He explains the current resurgence of inequalities as the consequence of technology change and buy the rapid expansion of international trade (globalization) (103). But key to his approach is a recognition of the extensive complexity of the processes of growth that economies experience — what Bhaskar called the open character of social causation.

Milanovic goes into substantial detail in explaining the elephant graph in this extensive lecture at Peterson Institute for International Economics (link). The discussion of the slide occurs at 7:45.

Milanovic is one of the most expert analysts of economic inequalities anywhere, and Global Inequality is a contribution that anyone interested in inequalities will want to read.