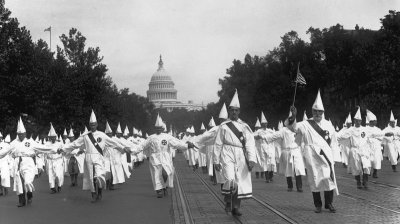 How should a democratic society handle the increasingly virulent challenges presented by hate groups, anti-government extremists, and organizations that encourage violence and discrimination against others in society? Should extremist groups have unlimited rights to advocate for their ideologies of hatred and antagonism against other groups within a democracy?

Erik Bleich has written extensively on the subject of racist speech and the law. Recent books include The Freedom to Be Racist?: How the United States and Europe Struggle to Preserve Freedom and Combat Racism and Race Politics in Britain and France: Ideas and Policymaking since the 1960s. Bleich correctly notes that these issues are broader than the freedom-of-speech framework in which they are often placed; so he examines law and policy in multiple countries on freedom of speech, freedom of association, and freedom of opinion-as-motive. In each of these areas he finds important differences across European countries and the United States with respect to legislation concerning racist expressions. In particular, liberal democracies like Great Britain, France, and Germany have created legislation to prohibit various kinds of hate-based speech and action. Here is his summary of the status of European legislation:

European restrictions on racist expression have proceeded gradually but consistently since World War II. A few provisions were established in the immediate postwar era, but most countries’ key laws were enacted in the 1960s and 1970s. The statutes have been tinkered with, updated, and expanded in the ensuing decades to the point where virtually all European liberal democracies now have robust hate speech laws on their books. These laws are highly symbolic of a commitment to curb racism. But they are also more than just symbols. As measured by prosecutions and convictions, levels of enforcement vary significantly across Europe, but most countries have deployed their laws against a variety of racist speech and have recently enforced stiffer penalties for repeat offenders. (kl 960)

In the United States it is unconstitutional under the First Amendment of the Constitution to prohibit “hate speech” or to ban hate-based organizations. So racist and homophobic organizations are accorded all but unlimited rights of association and expression, no matter how odious and harmful the content and effects of their views. As Bleich points out, other liberal democracies have a very different legal framework for regulating hate-based extremism by individuals and organizations (France, Germany, Sweden, Canada).

Here is the First Amendment of the US Constitution:

Congress shall make no law respecting an establishment of religion, or prohibiting the free exercise thereof; or abridging the freedom of speech, or of the press; or the right of the people peaceably to assemble, and to petition the Government for a redress of grievances.

This is pure liberalism, according to which the state needs to remain entirely neutral about disagreements over values, and the only justification for legal prohibition of an activity is the harm the activity creates. There is a strong philosophical rationale for this position. John Stuart Mill maintains an ultra-strong and exceptionless view of freedom of expression in On Liberty.  He argues that all ideas have an equal right to free expression, and that this position is most advantageous to society as a whole. Vigorous debate leads to the best possible set of beliefs. Here are a few passages from On Liberty:

The object of this Essay is to assert one very simple principle, as entitled to govern absolutely the dealings of society with the individual in the way of compulsion and control, whether the means used be physical force in the form of legal penalties, or the moral coercion of public opinion. That principle is, that the sole end for which mankind are warranted, individually or collectively, in interfering with the liberty of action of any of their number, is self-protection. (13)

But the peculiar evil of silencing the expression of an opinion is, that it is robbing the human race; posterity as well as the existing generation; those who dissent from the opinion, still more than those who hold it. If the opinion is right, they are deprived of the opportunity of exchanging error for truth: if wrong, they lose, what is almost as great a benefit, the clearer perception and livelier impression of truth, produced by its collision with error. (19)

This line of reasoning leads to legal toleration in the United States of groups like the White Citizens Councils, Neo-Nazi parties, and the Westboro Baptist Church to conduct their associations, propaganda, and demonstrations to further their hateful objectives. And they and their activists sometimes go further and commit acts of terrible violence (Timothy McVeigh, the murder of Matthew Shepherd in Wyoming, and the murders of civil rights workers in Mississippi).

But as Mill acknowledges, a democratic society has a right and an obligation to protect its citizens from violence. This is the thrust of the “harm” principle in Mill’s philosophy of political authority. Is right-wing extremism (RWE) really just another political platform, equally legitimate within the public sphere of debate in a democratic society? Or do these organizations represent a credible threat to personal safety and civil peace?

Certainly most of the disagreements between liberals and conservatives fall in Millian category — how much a society should spend on social welfare programs, what its immigration policies ought to be, the legal status of single-sex marriage. The disagreements among the parties are intense, but the debates and positions on both sides are legitimate. Mill is right about this range of policy disagreements. The political process and the sphere of public debate should resolve these disagreements.

But RWE goes beyond this level of disagreement about policy and legislation. RWE represents a set of values and calls to action that are inconsistent with the fundamentals of a democratic society. And they are strongly and essentially related to violence. RWE activists call for violence against hated groups, they call for armed resistance to the state (e.g. the Bundy’s), and they actively work to inculcate hatred against specific groups (Muslims, Jews, African Americans, gays and lesbians, …). These groups are anti-constitutional and contemptuous of the common core of civility upon which a democratic society depends.

There are two fundamental arguments against hate-based speech and associations that seem to justify exceptions to the general liberal principle of toleration of offensive speech. One is an argument linking hate to violence. There is ample historical evidence that hateful organizations do in fact stimulate violence by their followers (Birmingham bombing, lynchings and killings of civil rights workers, the assassination of Yitzak Rabin). So our collective interest in protecting all citizens against violence provides a moral basis for limiting incendiary hate speech and organization.

The second kind of argument concerns hate itself, and the insidious effects that hateful ideologies have on individuals, groups, and the polity. EU reports make an effort to capture the essential nature and harms of hate (link). Hate incites mistrust, disrespect, discrimination, and violence against members of other groups. The social effects of hate are toxic and serious. Do these effects suffice to justify limiting hate speech?

This is a difficult argument to make within the context of US jurisprudence. The realm of law involves coercion, and it is agreed that the threshold for interfering with liberty is a high one. It is also agreed that legal justifications and definitions need to be clear and specific. How do we define hate? Is it explained in terms of well-known existing hatreds — racism, anti-semitism, islamophobia, homophobia, …? Or should it be defined in terms of its effects — inculcating disrespect and hostility towards members of another group? Can there be new hatreds in a society — antagonisms against groups that were previously accepted without issue? Are there legitimate “hatreds” that do not lead to violence and exclusion? Or is there an inherent connection between hatred and overt antagonism? And what about expressions like those of Charlie Hebdo — satire, humor, caricature? Is there a zone of artistic expression that should be exempt from anti-hate laws?

To telegraph the argument here, my perspective focuses on the level of harm inflicted on individuals, victim groups, and societies. For individuals and victim groups, the harm has to be measurable, specific, and intense. For societies, racism that fosters violence or that drives wedges between groups justifies limiting freedom of expression, association, and opinion-as-motive. (kl 247)

Racist expressions, associations, or actions that drive a wedge between segments of society or that provoke an extremely hostile response have little redeeming social value. Their harm to other core liberal democratic values such as social cohesion and public order simply outweighs any potential benefits to be gained by protecting them. At the same time, if the statements or organizations are designed to contribute to public debate about state policies, they have to be rigorously protected, even if they may have potentially damaging side effects. (kl 3403)

And here are the closing words of advice offered in the book:

How much freedom should we grant to racists? The ultimate answer is this: look at history, pay attention to context and effects, work out your principles, convince your friends, lobby your representatives, and walk away with a balance of values that you can live with. (kl 3551)

The issue to this point has been whether the state can legitimately prohibit hate speech and organization. But other avenues for fighting hateful ideas fall within the realm of civil society itself. We can do exactly as Mill recommended: offer our own critiques and alternatives to hatred and racism, and strive to win the battle of public opinion. Empirically considered, this is not an entirely encouraging avenue, because a century of experience demonstrates that hate-based propaganda almost always finds a small but virulent audience. So it is not entirely clear that this remedy is sufficient to solve the problem.

These are all difficult questions. But the rise and virulence of hate-based groups across the world makes it urgent for democracies to confront the problem in a just way, respecting equality and liberty of citizens while stamping out hate. And there are pressing practical questions we have to try to answer: do the non-coercive strategies available to the associations of civil society have the capacity to securely contain the harmful spread of hate-based organizations and ideologies? And, on the other hand, do the more restrictive legal codes against racism and hate-based organizations actually work in France or Germany? Or does the continuing advance of extremist groups there suggest that legal prohibition had little effect on RWE as a political movement? And if both questions turn out unfavorably, does liberalism face the possibility of defeat by the organizations of hatred and racism?