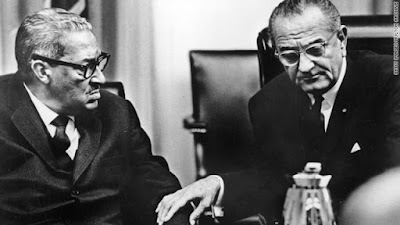 Thurgood Marshall was awarded the Liberty Medal by the National Constitution Center in 1992 (link). Marshall had stepped down as a justice of the US Supreme Court as its first African-American justice. Prior to his distinguished service on the Supreme Court he was the lead lawyer in the 1954 Supreme Court case Brown v. Board of Education of Topeka. He was appointed by President Johnson in 1967 and retired from the Supreme Court in 1991. He was an astute and engaged observer concerning the state of race relations and racial discrimination in the United States.

The acceptance speech that he provided on the occasion of the Liberty Medal ceremony is deeply sobering in virtue of the observations Marshall made about the state of racial equality in America in 1992, twenty-four years ago. Here are a few lines from the speech:

I wish I could say that racism and prejudice were only distant memories….

Democracy just cannot flourish amid fear. Liberty cannot bloom amid hate. Justice cannot take root amid rage. America must get to work. In the chill climate in which we live, we must go against the prevailing wind….

In 2016 these observations seem equally timely, in ways that Marshall could not have anticipated. First, his observation that racism and prejudice persist remains true today in the United States (link). It doesn’t take a social-science genius to recognize the realities of racial disparities in every important dimension of contemporary life — income and property, health, education, occupation, quality of housing, or life satisfaction. And most of these disparities persist even controlling for factors like education levels. These disparities are the visible manifestation of the workings of racial discrimination.

The next paragraph of Marshall’s speech is equally insightful. Several currents of political psychology are particularly toxic when it comes to improving the status of race relations in a democracy. A polity that embodies large portions of fear, hate, and rage is particularly challenged when it comes to building an inclusive polity founded on democratic values. Democracy requires a substantial degree of trust and mutual respect, if the identities and interests of various groups are to be fully incorporated. And yet democracy fundamentally requires inclusion and equality. So stoking hatred, suspicion, and fear is fundamentally anti-democratic.

Marshall closes with a theme that has almost always been key to the Civil Rights movement and the struggle for full racial equality and respect in our country: a basic optimism that the American public both needs and wants a polity that transcends the differences of race and religion that are a core part of our history and our future. We want a society that treats everyone equality and respectfully. And we reject political advocates who seek to undermine our collective commitments and civic values. “America can do better.”

Why do we have “no choice” in this matter? Here we have to extrapolate, but my understanding of Marshall’s meaning has to do with social stability, on multiple levels. A society divided into large groups of citizens who distrust, fear, and disrespect each other is surely a society that hangs at the edge of conflict. Conflict may take the form of group-on-group violence, as is seen periodically in India. Or it may take a more chaotic form, with isolated individual acts of violence against members of some groups, as we see in the US today through the rise in hate crimes against Muslims.

There are always political opportunities available to unscrupulous politicians in the rhetoric of division, mistrust, and hate. It is up to all of us to follow Marshall’s lead and insist that our democracy depends upon equality and mutual respect. We must therefore work hard to maintain the integrity of the political values of equality and civil respect associated with our political tradition. “America has no choice but to do better.”