Skip to content
The 41st annual meeting of the Social Science History Association is underway in Chicago this weekend. I’ve been a member since 1998, approaching half the lifetime of the association, and I continue to find it the most satisfying and stimulating of my professional associations.
The association was founded to create an alternative voice within the history profession, and to serve as a venue for multi-disciplinary approaches to research and explanation in history. It is very interesting that many of the earliest advocates for this new intellectual configuration — including some of the founders of the association — are still heavily involved. Bill Sewell, Andrew Abbott, Myron Gutmann (the current president), and Julia Adams all illustrate the importance of interdisciplinary work in their own research and writing, and these social researchers have all brought important innovations into the evolving task of understanding the social world.

SSHA programs have highlighted a diversity of ideas and approaches over the past four decades — historical demography, bringing culture into politics, the value of the social-causal mechanisms approach, using spatial techniques (GIS) to help further historical understanding, and the role played by identities of race, gender, and nation in historical process. A renewed interest in Eurasian history and global history is also noteworthy in recent years, offsetting the tendency towards eurocentrism in the history profession more broadly. The approaches associated with comparative historical sociology have almost always had a prominent role on the program. Memorable sessions in previous years by Chuck Tilly, George Steinmetz, Liz Clemens, and Sid Tarrow stand out in my mind. And in recent years there has been a healthy interest in issues of philosophy of history and historiography expressed in the program.Here is the SSHA’s mission statement:

The Social Science History Association is an interdisciplinary group of scholars that shares interests in social life and theory; historiography, and historical and social-scientific methodologies. SSHA might be best seen as a coalition of distinctive scholarly communities. Our substantive intellectual work ranges from everyday life in the medieval world – and sometimes earlier — to contemporary global politics, but we are united in our historicized approach to understanding human events, explaining social processes, and developing innovative theory.

The term “social science history” has meant different things to different academic generations. In the 1970s, when the SSHA’s first meetings were held, the founding generation of scholars took it to reflect their concern to address pressing questions by combining social-science method and new forms of historical evidence. Quantitative approaches were especially favored by the association’s historical demographers, as well as some of the economic, social and women’s historians of the time. By the 1980s and 1990s, other waves of scholars – including culturally-oriented historians and anthropologists, geographers, political theorists, and comparative-historical social scientists — had joined the conversation.

SSHA is a self-organizing configuration of scholars, and the annual program reflects the interests and initiative of its members. It is organized around 19 networks, each of which is managed by one of more network representatives. The program consists of panels proposed by the networks, along with a handful of presidential sessions organized by the program committee to carry out the year’s theme. (This year’s theme is “Beyond social science history: Knowledge in an interdisciplinary world”.) Here are the networks and the number of sessions associated with each: 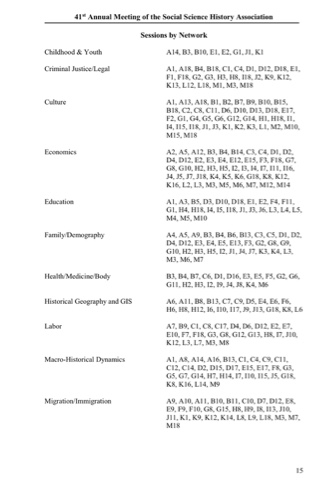 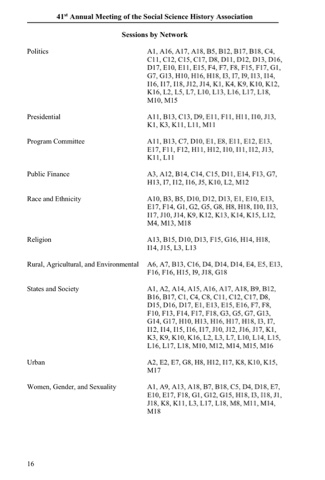 There are several things I especially appreciate about sessions at SSHA. First, the papers and discussions are almost always of high quality — well developed and stimulating. Second, there is a good diversity of participants across rank, gender, and discipline. And finally, there is very little posturing by participants. People are here because they care about the subjects and want stimulation, not because they are looking to make a statement about their own centrality in the field. There is a healthy environment based on an interest in learning and discussing at the SSHA, not the pervasive careerism of more discipline-based associations.