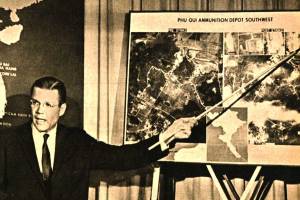 According to David Halberstam in his outstanding history of the war in Vietnam, The Best and the Brightest

, a prime cause of disastrous decision-making by Presidents Kennedy and Johnson was an institutional imperative in the Defense Department to come up with a set of facts that conformed to what the President wanted to hear. Robert McNamara and McGeorge Bundy were among the highest-level miscreants in Halberstam’s account; they were determined to craft an assessment of the situation on the ground in Vietnam that conformed best with their strategic advice to the President.

Ironically, a very similar dynamic led to one of modern China’s greatest disasters, the Great Leap Forward famine in 1959. The Great Helmsman was certain that collective agriculture would be vastly more productive than private agriculture; and following the collectivization of agriculture, party officials in many provinces obliged this assumption by reporting inflated grain statistics throughout 1958 and 1959. The result was a famine that led to at least twenty million excess deaths during a two-year period as the central state shifted resources away from agriculture (Frank Dikötter, Mao’s Great Famine: The History of China’s Most Devastating Catastrophe, 1958-62

More mundane examples are available as well. When information about possible sexual harassment in a given department is suppressed because “it won’t look good for the organization” and “the boss will be unhappy”, the organization is on a collision course with serious problems. When concerns about product safety or reliability are suppressed within the organization for similar reasons, the results can be equally damaging, to consumers and to the corporation itself. General Motors, Volkswagen, and Michigan State University all seem to have suffered from these deficiencies of organizational behavior. This is a serious cause of organizational mistakes and failures. It is impossible to make wise decisions — individual or collective — without accurate and truthful information from the field. And yet the knowledge of higher-level executives depends upon the truthful and full reporting of subordinates, who sometimes have career incentives that work against honesty.

So how can this unhappy situation be avoided? Part of the answer has to do with the behavior of the leaders themselves. It is important for leaders to explicitly and implicitly invite the truth — whether it is good news or bad news. Subordinates must be encouraged to be forthcoming and truthful; and bearers of bad news must not be subject to retaliation. Boards of directors, both private and public, need to make clear their own expectations on this score as well: that they expect leading executives to invite and welcome truthful reporting, and that they expect individuals throughout the organization to provide truthful reporting. A culture of honesty and transparency is a powerful antidote to the disease of fabrications to please the boss.

Anonymous hotlines and formal protection of whistle-blowers are other institutional arrangements that lead to greater honesty and transparency within an organization. These avenues have the advantage of being largely outside the control of the upper executives, and therefore can serve as a somewhat independent check on dishonest reporting.

A reliable practice of accountability is also a deterrent to dishonest or partial reporting within an organization. The truth eventually comes out — whether about sexual harassment, about hidden defects in a product, or about workplace safety failures. When boards of directors and organizational policies make it clear that there will be negative consequences for dishonest behavior, this gives an ongoing incentive of prudence for individuals to honor their duties of honesty within the organization.

This topic falls within the broader question of how individual behavior throughout an organization has the potential for giving rise to important failures that harm the public and harm the organization itself.