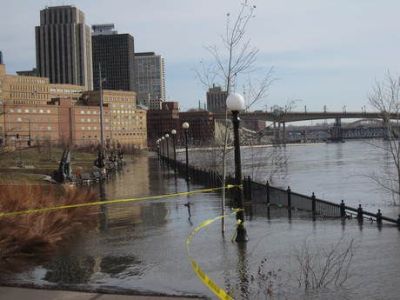 An increasingly pressing consequence of climate change is the rising threat of flood in coastal and riverine communities. And yet a combination of Federal and local policies have created land use incentives that have led to increasing development in flood plains since the major floods of the 1990s and 2000s (Mississippi River 1993, Hurricane Katrina 2005, Hurricane Sandy 2016, …), with the result that economic losses from flooding have risen sharply. Many of those costs are born by tax payers through Federal disaster relief and subsidies to the Federal flood insurance program.

Christine Klein and Sandra Zellmer provide a highly detailed and useful review of these issues in their brilliant SMU Law Review article, “Mississippi River Stories: Lessons from a Century of Unnatural Disasters” (link). These arguments are developed more fully in their 2014 book Mississippi River Tragedies: A Century of Unnatural Disaster. Klein and Zellmer believe that current flood insurance policies and disaster assistance policies at the federal level continue to support perverse incentives for developers and homeowners and need to be changed. Projects and development within 100-year flood plains need to be subject to mandatory flood insurance coverage; flood insurance policies should be rated by degree of risk; and government units should have the legal ability to prohibit development in flood plains. Here are their central recommendations for future Federal policy reform:

Substantive requirements for watershed planning and management would effectuate the Progressive Era objective underlying the original Flood Control Act of 1928: treating the river and its floodplain as an integrated unit from source to mouth, “systematically and consistently,” with coordination of navigation, flood control, irrigation, hydropower, and ecosystem services. To accomplish this objective, the proposed organic act must embrace five basic principles:

(4) Stop wetlands losses and restore damaged floodplains by re-establishing natural areas that are essential for floodwater retention; and

(5) Recognize that land and water policies are inextricably linked and plan for both open space and appropriate land use in the floodplain. (1535-36)

Here is Klein and Zellmer’s description of the US government’s response to flood catastrophes in the 1920s:

Flood control was the most pressing issue before the Seventieth Congress, which sat from 1927 to 1929. Congressional members quickly recognized that the problems were two-fold. First, Congressman Edward Denison of Illinois criticized the absence of federal leadership: “the Federal Government has allowed the people. . . to follow their own course and build their own levees as they choose and where they choose until the action of the people of one State has thrown the waters back upon the people of another State, and vice versa.” Moreover, as Congressman Robert Crosser of Ohio noted, the federal government’s “levees only” policy–a “monumental blunder”–was not the right sort of federal guidance. (1482-83)

In passing the Flood Control Act of 1928, congressional members were influenced by Progressive Era objectives. Comprehensive planning and multiple-use management were hallmarks of the time. The goal was nothing less than a unified, planned society. In the early 1900s, many federal agencies, including the Bureau of Reclamation and the U.S. Geological Survey, had agreed that each river must be treated as an integrated unit from source to mouth. Rivers were to be developed “systematically and consistently,” with coordination of navigation, flood control, irrigation, and hydro-power. But the Corps of Engineers refused to join the movement toward watershed planning, instead preferring to conduct river management in a piecemeal fashion for the benefit of myriad local interests. (1484)

But perverse incentives were created by Federal flood policies in the 1920s that persist to the present:

Only a few decades after the 1927 flood, the Mississippi River rose up out of its banks once again, teaching a new lesson: federal structural responses plus disaster relief payouts had incentivized ever more daring incursions into the floodplain. The floodwater evaded federal efforts to control it with engineered structures, and those same structures prevented the river from finding its natural retention areas–wetlands, oxbows, and meanders–that had previously provided safe storage for floodwater. The resulting damage to affected areas was increased by orders of magnitude. The federal response to this lesson was the adoption of a nationwide flood insurance program intended to discourage unwise floodplain development and to limit the need for disaster relief. Both lessons are detailed in this section. (1486)

Paradoxically, navigational structures and floodplain constriction by levees, highway embankments, and development projects exacerbated the flood damage all along the rivers in 1951 and 1952. Flood-control engineering works not only enhanced the danger of floods, but actually contributed to higher flood losses. Flood losses were, in turn, used to justify more extensive control structures, creating a vicious cycle of ever-increasing flood losses and control structures. The mid-century floods demonstrated the need for additional risk-management measures. (1489)

Only five years after the program was enacted, Gilbert White’s admonition was validated. Congress found that flood losses were continuing to increase due to the accelerating development of floodplains. Ironically, both federal flood control infrastructure and the availability of federal flood insurance were at fault. To address the problem, Congress passed the Flood Disaster Protection Act of 1973, which made federal assistance for construction in flood hazard areas, including loans from federally insured banks, contingent upon the purchase of flood insurance, which is only made available to participating communities. (1491)

But development and building in the floodplains of the rivers of the United States has continued and even accelerated since the 1990s.Government policy comes into this set of disasters at several levels. First, climate policy — the evidence has been clear for at least two decades that the human production of greenhouse gases is creating rapid climate change, including rising temperatures in atmosphere and oceans, severe storms, and rising ocean levels. A fundamental responsibility of government is to regulate and direct activities that create public harms, and the US government has failed abjectly to change the policy environment in ways that substantially reduce the production of CO2 and other greenhouse gases. Second, as Klein and Zellmer document, the policies adopted by the US government in the early part of the twentieth century intended to prevent major flood disasters were ill conceived. The efforts by the US government and regional governments to control flooding through levees, reservoirs, dams, and other infrastructure interventions have failed, and have probably made the problems of flooding along major US rivers worse. Third, the human activities in flood plains — residences, businesses, hotels and resorts — have worsened the severity of the consequences of floods by elevating the cost in lives and property because of reckless development in flood zones. Governments have failed to discourage or prevent these forms of development, and the consequences have proven to be extreme (and worsening).

It is evident that storms, floods, and sea-level rise will be vastly more destructive in the decades to come. Here is a projection of the effects on the Florida coastline after a sustained period of sea-level rise resulting from a 2-degree Centigrade rise in global temperature (link): 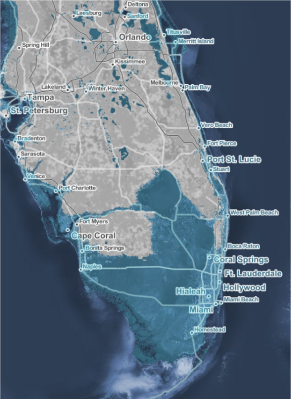 We seem to have passed the point where it will be possible to avoid catastrophic warming. Our governments need to take strong actions now to ameliorate the severity of global warming, and to prepare us for the damage when it inevitably comes.