How can sociology treat “culture” as an object of study and as an influence on other sociological processes? This is, of course, two separate questions. First, internally, is it possible to treat philosophy or literature as an embedded sociological process (a point raised by Jean-Louis Fabiani in his treatment of French philosophy (link))?  Can we use the apparatus to pull apart the sociology of the fashion industry?

And second, externally, can we give a rigorous and meaningful interpretation of “bringing culture back in” — conceptualizing the ways that thought, experience, and the institutions and mental realities of culture impact other large social processes — e.g. the rise of fascism (link)?

The problem here is to find ways of getting inside “culture” and decomposing it as a set of social, material, and semiotic practices. We need an account of some of the culture mechanisms through which voices develop, acquire validation, and are retransmitted. And we need concrete accounts of how this culture activity influences other socially important processes. Culture cannot be thought of as a monolith if we are to explain its development and trace out its historical influences; rather, we need something like an account of the microfoundations of culture.

One of the fertile voices on this question is that of Pierre Bourdieu.  His core contribution is the idea of cultural life and production being situated in a “field.” So what does Bourdieu mean by a field? Is this concept genuinely useful when we aim at providing a sociology of a literary tradition or a body of ideas like “cultural despair”?

One place where Bourdieu provides extensive analysis and application of this construct is in a collection published in 1993, The Field of Cultural Production

, and especially in the title chapter, originally published in 1983. Here Bourdieu is primarily interested in literature and art, but it seems that the approach can be applied fruitfully to a wide range of cultural phenomena, including American conservativism and early twentieth century German colonialism.  (George Steinmetz makes extensive use of this concept of the field in his analysis of the causes of specific features of German colonial regimes; The Devil’s Handwriting: Precoloniality and the German Colonial State in Qingdao, Samoa, and Southwest Africa

The heart of Bourdieu’s approach is “relationality” — the idea that cultural production and its products are situated and constituted in terms of a number of processes and social realities. Cultural products and producers are located within “a space of positions and position-takings” (30) that constitute a set of objective relations.

This description highlights another characteristic feature of Bourdieu’s approach to social life — an intimate intermixture of objective and subjective factors, or of structure and agency.  (This intermixture is also fundamental to Bourdieu’s theory of practice in Outline of a Theory of Practice

.)  Bourdieu typically wants to help us understand a sociological whole as a set of “doings” within “structures and powers.”  The field of the French novel in the 1890s established a set of objective circumstances to which the novelist was forced to adapt; but it also created opportunities for strategy and struggle for aspiring novelists.  This is captured in the final sentence of the passage: a “field of forces” but also a “field of struggles”.  And in fact, Emile Zola, pictured above, did much to redefine aspects of that field, both in ideas and in material institutions.

Fundamental to Bourdieu’s view is that we can’t understand the work of art or literature (or philosophy or science, by implication) purely in reference to itself.  Rather, it is necessary to situate the work in terms of other points of reference in meaning and practice. So he writes that we can’t understand the history of philosophy as a grand summit conference among the great philosophers (32); instead, it is necessary to situate Descartes within his specific intellectual and practical context, and likewise Leibniz. And the meaning of the work changes as its points of reference shift. “It follows from this, for example, that a position-taking changes, even when the position remains identical, whenever there is change in the universe of options that are simultaneously offered for producers and consumers to choose from.  The meaning of a work (artistic, literary, philosophical, etc.) changes automatically with each change in the field within which it is situated for the spectator or reader” (30).

This fact of relationality and embeddedness raises serious issues of interpretation for later readers:

One of the major difficulties of the social history of philosophy, art or literature is that it has to reconstruct these spaces of original possibles which, because they were part of the self-evident givens of the situation, remained unremarked and are therefore unlikely to be mentioned in contemporary accounts, chronicles or memoirs. (31)

Here is how Bourdieu describes the intellectual field within which philosophy proceeds in a time and place:

In fact, what circulates between contemporary philosophers, or those of different epochs, are not only canonical texts, but a whole philosophical doxa carried along by intellectual rumour — labels of schools, truncated quotations, functioning as slogans in celebration or polemics — by academic routine and perhaps above all by school manuals (an unmentionable reference), which perhaps do more than anything else to constitute the ‘common sense’ of an intellectual generation. (32)

This background information is not merely semiotic; it is institutional and material as well.  It includes “information about institutions — e.g. academies, journals, magazines, galleries, publishers, etc. — and about persons, their relationships, liaisons and quarrels, information about the ideas and problems which are ‘in the air’ and circulate orally in gossip and rumour” (32).  So the literary product is created by the author; but also by the field of knowledge and institutions into which it is offered.

Another duality that Bourdieu rejects is that of internal versus external readings of a work of literature or art.  We can approach the work of art from both perspectives — the qualities of the work, and the social embeddedness that its production and reception reveal.

In defining the literary and artistic field as, inseparably, a field of positions and a field of position-takings we also escape from the usual dilemma of internal (‘tautegorical’) reading of the work (taken in isolation or within the system of works to which it belongs) and external (or ‘allegorical’) analysis, i.e. analysis of the social conditions of production of the producers and consumers which is based on the — generally tacit — hypothesis of the spontaneous correspondence or deliberate matching of production to demand or commissions. (34)

A key aspect of Bourdieu’s conception of a field of cultural production is the material facts of power and capital.  Capital here refers to the variety of resources, tangible and intangible, through which a writer or artist can further his/her artistic aspirations and achieve “success” in the field (“book sales, number of theatrical performances, etc. or honours, appointments, etc.” (38)).  And power in the cultural field is “heteronomous” — it is both internal to the institutions of the culture field and external, through the influence of the surrounding field of power within which the culture field is located.  Here is an intriguing diagram that Bourdieu introduces to represent the complex location of art activity within the broader field of social power and the market. 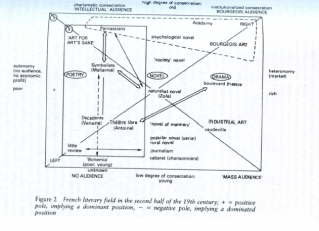 These comments give us a better idea of what a “field” encompasses.  It is a zone of social activity in which there are “creators” who are intent on creating a certain kind of cultural product.  The product is defined, in part, by the expectations and values of the audience — not simply the creator.  The audience is multiple, from specialist connoisseurs to the mass public.  And the product is supported and filtered by a range of overlapping social institutions — galleries, academies, journals, reviews, newspapers, universities, patrons, sources of funding, and the market for works of “culture.”  It is also important to observe that we could have begun this inventory of components at any point; the creator does not define the field any more than the critic, the audience, or the marketplace.

I see some similarities between Bourdieu’s conception of a field and the broad ideas of paradigm and research tradition in the history and sociology of science. Both ideas encompass a range of different kinds of things — laboratories, journals, audiences, critics, and writers and scientists. Here Lakatos and Kuhn are relevant, but so are Bruno Latour and Wiebe Bijker. In each case there is some notion of rules of assessment — explicit or tacit. And in each case we are given breadth enough to consider the social “determinants” of the cultural product at one end — economy, institutions of training and criticism — and some notion of the relative autonomy of the text or object at the other (truth and warrant, beauty and impact).

The point mentioned above about the validity and compatibility of both internal and external analysis of a work of art is equally important in the sociology of science: to identify some of the social conditions surrounding the process of scientific research does not mean that we cannot arrive at judgments of truth and warrant for the products of scientific research. (This point has come up previously in a discussion of Robert Merton’s sociology of science (link).)

This is a very incomplete analysis of Bourdieu’s concept of the field; but it should give an idea of the leverage that Bourdieu provides in framing a scheme of analysis for culture and ideas as concrete sociological factors and objects of study.  Certainly Bourdieu’s writings on these subjects — especially in The Field of Cultural Production

— repay close reading by sociologists interested in broadening their frameworks for thinking about culture.  (Jeremy Lane’s Pierre Bourdieu: A Critical Introduction is a good introduction to Bourdieu’s sociology, though it doesn’t give much attention to this particular topic.)