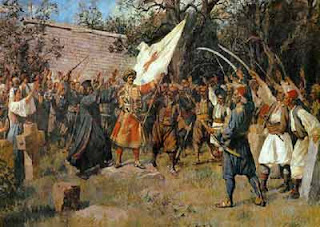 Democracy and contention are back on the front page, thanks to the uprisings in the Middle East and North Africa (MENA).  As always, Chuck Tilly provided some important insights into today’s events based on his depth analysis of several hundred years of contentious politics.  The relevant work on the intersection between democratization and contention is Contention and Democracy in Europe, 1650-2000 (20

04).  As the history of contentious politics demonstrates, nothing in the nature of social contention leads necessarily to a demand for greater democracy; in fact, nineteenth century observers tended to believe that “revolutionary contention” and democracy were antithetical to each other. So democratization and contention are interweaving subjects rather than different aspects of the same process.

As always, Tilly is interested in using historical comparisons to shed light on the processes of contention and democratization, and the history that they focus on in this volume is that of modern France and Britain.

To explain similarities and differences in French and British experience since 1650 constitutes a reasonable start toward more general explanations of variation within Europe as a whole. Since European polities and their immediate transplants originated most of the contemporary institutions we recognize as democratic, furthermore, any explanation that gets right the last few centuries of European involvement in contention and democracy offers some promise of helping to identify likely origins of democracy elsewhere. (7)

So comparison is one key methodological pillar.  The other is the framework of mechanisms and processes that he and his colleagues developed in Dynamics of Contention

and in other subsequent works.  “[This book’s] claim to attention resets instead on the identification of mechanisms and processes that promote, inhibit, or reverse democratization” (ix).  This places Tilly’s approach in direct opposition to several other theories of largescale social change — theories that look for common structural factors that explain large outcomes such as democracy or revolution, and theories that look primarily to the intentions of the actors.

My inquiry guesses, furthermore, that the social world’s order does not reside in general laws, repeated large-scale sequences, or regular relationships among variables.We should not search for a single set of circumstances or a repeated series of events that everywhere produces democracy. Nor should we look for actors having democratic intentions, seeking to discover how and when they get chances to realize those intentions. We should look instead for robust, recurrent causal mechanisms that combine differently, with different aggregate outcomes, in different settings. (9)

If we are to attempt to understand the factors that are conducive to (or inhibitive of) greater democracy, we need to have a fairly specific idea of what we are thinking of under the concept of democracy.  Tilly provides this definition of democratization:

Remarkable in this definition is the fact that Tilly does not chiefly highlight institutions such as representative voting or separation of powers, but rather several more general features of a polity: equality between government and the subject population, binding consultation of the subject population, and protection of the subject population from arbitrary action.  Each of these dimensions has a strong theoretical relationship to the concept of democracy; the equal worth of citizens favors the first point, the idea that citizens should contribute to the formation of government’s policies finds expression in “binding consultation”; and the idea of the rule of law is expressed in the idea of protection from arbitrary action.  Greater democratization means increasing one or more of these three dimensions in the given society.  Tilly refers to this as a “political process” approach to the conceptual problem.  And he folds this definition into a substantive historical hypothesis:

Only where positive changes in trust network integration, inequality insulation, and the relevant internal transformations of public politics all intersect does effective, durable democracy emerge. Most changes in public politics, on the contrary, produce undemocratic outcomes. (17)

So what are the high-level factors that work on the state’s side to influence the state’s ability to crush popular contention?  And what external factors might bring about abrupt changes in these factors?  Tilly refers to a state’s command of “coercion, capital, and commitment” as a measure of its ability to enforce its will — including the ability to repress popular movements demanding social and political change.  Coercion has to do with the apparatus of the military and police, and the administrative infrastructure through which these are controlled.  Capital has to do with the amount of wealth the state is able to summon to its purposes.  And commitment has to do with the networks of committed partners the state can call upon throughout the population within its scope of control — what he refers to as the “trust networks” of the state.  When the state’s ability to marshall these forms of power is great, contentious movements are unlikely to succeed.  But specific, concrete social factors can work to undermine each of these aspects of the state’s power.  Those factors can be internal — a food crisis that greatly undermines the loyalty of the state’s agents, for example — or external — the stresses of international efforts by the state.  In particular, he singles out revolution, conquest, confrontation, and colonization as large stresses for the state that can significantly change its ability to enforce its will (40).  And all of this leads Tilly to a fairly strong hypothesis:

Regional variation in the accumulation and concentration of coercion, capital, and commitment strongly affected the sorts of governmental institutions that formed in different parts of Europe through the centuries, but the presence of certain sorts of regimes in a region shaped what kinds of regimes formed later. (45)

These factors give some insight into how a regime can be more or less capable of resisting contentious challenges; but what factors influence the likelihood of such challenges themselves? Tilly’s analysis takes an important step towards greater specificity through his construction of three tables of concrete mechanisms in these areas of political process: “mechanisms segregating categorical inequality from public politics,” “mechanisms integrating trust networks into public politics”, and “mechanisms increasing breadth, equality, enforcement and security of mutual obligations between citizens and government agents” (18-20). Examples from each group of mechanisms are highly relevant to the processes currently underway in Egypt, Tunisia, and Libya:

These tables amount to a detailed micro-analysis of mechanisms and processes that can occur more or less independently, and that have impact on the democratic issues of categorical inequalities, consultation, and protection.  Here is a causal model in which Tilly attempts to capture the meso-level causality that he finds in the comparison of British and French contentious politics over three centuries: 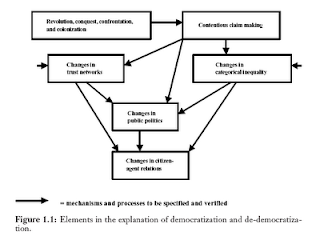 Tilly encapsulates his key findings in these thirteen hypotheses:

Here is what France’s political history looks like, according to Tilly’s analysis of its path through the space of “governmental capacity” and “protected consultation”: 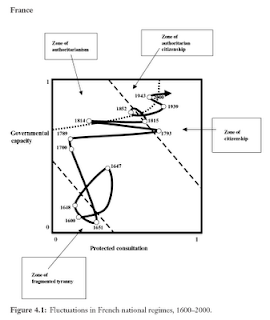 Some readers might be disappointed at the complexity of the analysis Tilly offers here.  But that is inherent in his foundational assumptions: that there are many relevant mechanisms and processes, that these mechanisms interact in multiple complex ways, and that there are many pathways to democracy and dictatorship.  So even the most systematic tracing of possible scenarios will result in a highly complex “phase diagram” of a polity as it moves through its political processes over time.

In light of the recent post about Steve Pincus’s reinterpretation of the Glorious Revolution of 1688-89, it is interesting to pull out a few of Tilly’s observations about the same period.

These points converge closely with Pincus’s points about the modernizing state, and the role of financial elites in the changes of the period.  But it is also interesting that Tilly treats the earlier part of the English seventeenth century as being more crucial for the process of British democratization.  The “Glorious Revolution” plays a secondary role in his analysis.