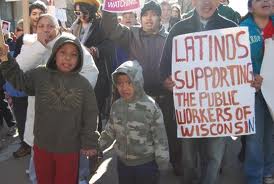 One thing I find interesting about the sustained demonstrations and protests in Madison, Wisconsin is the fact that people on the streets do not seem to be chiefly motivated by personal material interests. Rather, the passion and the sustainability of the protests against Governor Walker’s plans seem to derive from an outrage felt by many people in Wisconsin and throughout the country, that the Governor’s effort is really an attempt to reduce people’s rights — in this case, the right to come together as a group of workers to bargain together. This is a well established right in the private sector, protected by the National Labor Relations Act, and the rationale is substantially the same in the public sector.

So when the Governor attempts to eliminate the right to collective bargaining for public employees, he offends the sense of justice of many citizens in Wisconsin and elsewhere — whether or not they are directly affected, whether or not they themselves are members of unions. Restricting established social rights is a very serious thing — well beyond the specific calculation of interests that people might make. It’s morally offensive in the way that state efforts to roll back voting rights would be offensive.  And this moral offensiveness can be a powerful motivator of collective resistance.

So this seems to provide an intriguing clue about political mobilization more generally. To what extent is moral outrage, a perception of injustice, an important motivator of individual political engagement and activism?

When we look at the MENA rebellions, even from a great distance, it seems that concerns about social and political justice have as much prominence as more material motivations — demands for food subsidies, demands for state-sponsored jobs programs, etc. Egyptians, Tunisians, and Libyans interviewed on the BBC talk more frequently about the outrage of dictatorship and arbitrary state power than they do about material demands. And really, it’s hard to see an economic interest in forcing a certain kind of food subsidy program being strong enough to create enough of a political motivation to lead a person to stand up against fighter jets and attack helicopters.

This is an insight that James Scott expressed a generation ago in The Moral Economy of the Peasant: Rebellion and Subsistence in Southeast Asia

, and E. P. Thompson a generation before that in Customs in Common

, in the theory of the moral economy. In its essence, the theory holds that the fact of sustained violation of a person’s moral expectations of the society around him or her is a decisive factor in collective mobilization in many historical circumstances.  Later theorists of political activism have downplayed the idea of moral outrage, preferring more material motivations based on self-interest.  But the current round of activism and protest around the globe seems to point back in the direction of these more normative motivations — combined, of course, with material interests.  So it is worth reexamining the idea that a society that badly offends the sense of justice of segments of its population is likely to stimulate resistance.

This basic and compelling idea has an important implication for sustainable social and political stability in a political regime. If citizens react collectively to sustained injustice, then a regime that wants to rule sustainably needs to respect the demands of justice.  It is important for a social order to arrive at a rough-and-ready shared understanding about the rights and obligations that citizens have, and it is important for the state to conduct itself in ways that honor those expectations.

This sounds like a social contract theory, and it certainly has something in common with that normative theory. But its relevance here is more sociological. It is the basis of a prediction about what social and political circumstances will elicit sustained protest and resistance, and which kinds of arrangements are likely to be accepted indefinitely by the population. And it leads to a policy recommendation for any regime that wants to create a stable, ongoing polity: work hard to make sure that social arrangements and institutions treat citizens fairly, and don’t gratuitously violate their deeply held convictions about their rights and about the general features of justice.

So what moral expectations do American citizens have about how society ought to work? Several things seem fairly clear. Americans care about equality of opportunity. We are deeply rankled by the idea that the good opportunities in society are somehow captured by an elite of any sort. Second is the idea of equal treatment of all citizens by the institutions of the state. Teenagers and persons of color rankle at being singled out for special attention by the police. Women rightly seethe at the persistence of institutions in the workplace that continue to treat them differently. Arab Americans rightly resent special scrutiny at airports.  We don’t accept status inequality easily — especially in our own cases.  And third, we are very sensitive about the inviolability of our rights — our right to vote, right to go where we want, right to speak our minds and associate with whomever we want to.

What Americans don’t yet seem to have is a specific moral sensitivity to extreme inequalities of income and wealth. The fact of the accelerating concentration of income at the top doesn’t seem to produce the moral outrage in the US that perhaps it would in France or Germany. And maybe this comes from another element of our moral economy — the idea that inequalities are all right as long as they are fairly earned. But more information about bonuses on Wall Street and the banking industry may begin to erode that tolerance.

It is intriguing to have widely separated examples of social mobilization going on right now.  Surely there are sociologists and political scientists working right now to interview leaders and followers in Egypt, Madison, or Benghazi trying to sort out the motivations and social networks through which these movements arose and solidified.  As a theoretically informed prediction, it seems likely that moral motivations like resentment of arbitrary power, violations of strongly held rights, and persistent status inequalities will be found to have played a role.