In an earlier post I indicated a degree of disagreement with the premises of analytical sociology concerning the validity of methodological individualism (link). This disagreement comes down to three things.

First, for reasons I’ve referred to several times here and elsewhere (link), I prefer to refer to methodological localism rather than methodological individualism.

This theory of social entities affirms that there are large social structures and facts that influence social outcomes. But it insists that these structures are only possible insofar as they are embodied in the actions and states of socially constructed individuals. The “molecule” of all social life is the socially constructed and socially situated individual, who lives, acts, and develops within a set of local social relationships, institutions, norms, and rules. (link)

I believe that the ideas of localism and socially constructed, socially situated actors do a better job of capturing the social molecule that underlies larger social processes than the simple idea of an “individual”. Structural individualism seems to come to a similar idea, but less intuitively.

Second, the requirement of providing microfoundations for social assertions is preferable to methodological individualism because it is not inherently reductionist (link). A microfoundation is:

a specification of the ways that properties, structural features, and causal powers of a social entity are produced and reproduced by the actions and dispositions of socially situated individuals. (link)

We need to be confident that our theories and concepts about social structures, entities, and forces appropriately supervene upon facts about individuals; but we don’t need to rehearse those links in every theory or explanation. In other words, we can make careful statements about macro-macro and macro-meso links without proceeding according to the logic of Coleman’s boat — up and down the struts. Jepperson and Meyer make this point in “Multiple Levels of Analysis and the Limitations of Methodological Individualisms” (link), and they offer an alternative to Coleman’s macro-micro boat that incorporates explanations referring to meso-level causes (66). 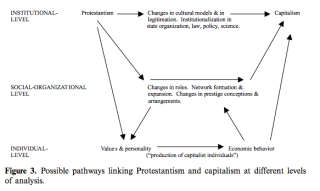 Third, these points leave room for a meta-theory of relative explanatory autonomy for social explanations. The key insight here is that there are good epistemic and pragmatic reasons to countenance explanations at a meso-level of organization, without needing to reduce these explanations to the level of individual actors. Here is a statement of the idea of relative explanatory autonomy, provided by a distinguished philosopher of science, Lawrence Sklar, with respect to areas of the physical sciences:

The idea of relative explanatory autonomy has been invoked by cognitive scientists against the reductionist claims of neuro-scientists. Of course cognitive mechanisms must be grounded in neurophysiological processes. But this doesn’t entail that cognitive theories need to be reduced to neurophysiological statements. Sacha Bem reviews these arguments in “The Explanatory Autonomy of Psychology: Why a Mind is Not a Brain” (link). Michael Strevens summarizes some of these issues in “Explanatory Autonomy and Explanatory Irreducibility” (link). And here Geoffrey Hellman addresses the issues of reductionism and emergence in the special sciences in “Reductionism, Determination, Explanation”.

These arguments are directly relevant to the social sciences, subject to several important caveats. First is the requirement of microfoundations: we need always to be able to plausibly connect the social constructs we hypothesize to the actions and mentalities of situated agents. And second is the requirement of ontological and causal stability: if we want to explain a meso-level phenomenon on the basis of the causal properties of other meso-level structures, we need to have confidence that the latter properties are reasonably stable over different instantiations. For example, if we believe that a certain organizational structure for tax collection is prone to corruption of the ground-level tax agents and want to use that feature as a cause of something else — we need to have empirical evidence supporting the assertion of the corruption tendencies of this organizational form.

Explanatory autonomy is consistent with our principle requiring microfoundations at a lower ontological level. Here we have the sanction of the theory of supervenience to allow us to say that composition and explanation can be separated. We can settle on a level of meso or macro explanation without dropping down to the level of the actor. We need to be confident there are microfoundations, and the meso properties need to be causally robust. But if this is satisfied, we don’t need to extend the explanation down to the actors.

Woven throughout this discussion are the ideas of reduction and emergence. An area of knowledge is reducible to a lower level if it is possible to derive the statements of the higher-level science from the properties of the lower level. A level of organization is emergent if it has properties that cannot be derived from features of its components. The strong sense of emergence holds that a composite entity sometimes possesses properties that are wholly independent from the properties of the units that compose it. Vitalism and mind-body dualism were strong forms of emergentism: life and mind were thought to possess characteristics that do not derive from the properties of inanimate molecules. Physicalism maintains that all phenomena — including living systems — depend ultimately upon physical entities and structures, so strong emergentism is rejected. But physicalism does not entail reductionism, so it is scientifically acceptable to provide explanations that presuppose relative explanatory autonomy.

Once we have reason to accept something like the idea of relative explanatory autonomy in the social sciences, we also have a strong basis for rejecting the exclusive validity of one particular approach to social explanation, the reductionist approach associated with methodological individualism and Coleman’s boat. Rather, social scientists can legitimately aggregate explanations that call upon meso-level causal linkages without needing to reduce these to derivations from facts about individuals. And this implies the legitimacy of a fairly broad conception of methodological pluralism in the social science, constrained always by the requirement of microfoundations.