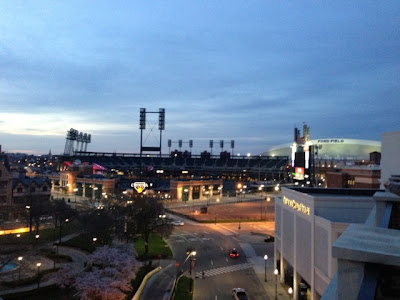 I recently spent a half day visiting Detroit with some very perceptive university colleagues. We visited the university’s center on Woodward Avenue, the Riverfront Conservancy, and the Madison Building — all places where exciting signs of change are underway. Along the way we heard a lot of enthusiasm about the progress Detroit is making: more professional jobs downtown, residential and commercial real estate at 95%+ occupancy, entrepreneurial companies, $75 million invested in a spectacular river walk along the Detroit River, some very talented high school students coming out of several of Detroit’s best high schools.

The most common reaction in the group to what we saw was a positive one. Detroit is better off than the media portrays it. There are powerful processes of renewal underway that will change the future of the city for all its inhabitants for the better. The reinfusion of businesses and middle-class residents will improve the tax base and the city’s fiscal sustainability. And somehow these benefits will trickle out to the neighborhoods.

Or not. Like others, several of us noticed that these developments in downtown Detroit (Campus Martius, the Woodward Corridor) have had very little effect on the neighborhoods where 80-90% of the city lives. The sports, arts, and dining destinations are great — but they don’t have much to do with Detroit’s blighted neighborhoods. Unemployed high school dropouts aren’t going to be offered jobs in the high tech startups.

So what is the future for the impoverished and undereducated youth of this city? The theory I was testing in my mind was Loic Wacqant’s concept in Urban Outcasts: A Comparative Sociology of Advanced Marginality of fundamental marginalization–a sub-population of people with no avenues of opportunity and no hope for the future (link). This view implies that the segregated urban enclaves of American cities like Chicago, Washington, or Detroit offer virtually no prospect of social mobility for the young men and women who grow up there. Is that too bleak? Does it overlook or underestimate pathways of mobility that can bring substantial improvement for life expectations for this community after all? Or is permanent impacted poverty and disaffection the more likely outcome?

I talked with two other participants in this visit who disagreed with the “permanent marginalization” view in interesting ways. Both of these people were African-American men who had grown up in metro Detroit. One, born in 1970, took issue with the youth-hopelessness part of the picture. His view is that Detroit is significantly different from Chicago (the city Wacquant studied most closely), because Detroit is a majority black city. So he thinks teenagers in Detroit have an optimism their counterparts in Chicago lack. He also thinks the lower residential density of Detroit is an advantage. Young people are less oppressed by racism because they are part of a population that governs the city. By contrast, he argues that the black population of Chicago looks at the city as a white city and they feel powerless. So urban despair is deeper in Chicago.

The other person in the conversation had what is in someways a view even bleaker than mine. He is a distinguished social scientist born in 1940. He too grew up in the Detroit metro area. He commented that the developers’ vision is really a picture of a white city. “This is a white vision of Detroit’s future.” He predicted that in 25 years the black population of Detroit will be largely gone, replaced by a more affluent white population. Wow!

One thing that came out of the evening is an intriguing idea: invite a group of Detroit 18-year-olds, some in high school and some dropouts, to have a conversation about the future of their neighborhoods and their city, and what they think about their own futures. These are the kinds of conversations Al Young reports in The Minds of Marginalized Black Men: Making Sense of Mobility, Opportunity, and Future Life Chances. This would shed some light on all the major theories of urban futures. And conversations like these would be an important reality check for people who think that there is a general process of improvement that is going to bring everyone up through some kind of hidden-hand process of market successes.

The “permanent marginalization” view is a dark one, but it is not passive. Rather, it undergirds the idea that the structures of race and segregation still present in our society have embodied enduring and intractable inequalities, and only deliberate, sustained, and committed efforts will allow us to resolve these problems. Our cities need structural change and substantial public investment, deliberately aimed at breaking the circles of poverty, race, inferior education, and disaffection, and sustained over decades rather than years.

The developments we looked at during our visit are certainly important steps forward for the city. And the business leaders who are stimulating these developments are committed to improving Detroit’s future. But I’m not yet convinced that these developments can lead by themselves to the transformation of the lives of the whole population of the city, black and white, without other initiatives that are directly aimed at breaking down the barriers of race and poverty that imprison so many of Detroit’s young people.

(“Imprison” is probably the right word in this context, given the epidemic of incarceration our cities have witnessed in the past thirty years. Michelle Alexander’s The New Jim Crow: Mass Incarceration in the Age of Colorblindness documents the harm done to urban communities by the mass incarceration of young black men.)