Jon Elster is one of the people whose thinking about society and the social sciences has made a consistently important contribution to the philosophy of social science. So Elster’s treatment of Tocqueville as a social scientist in Alexis de Tocqueville, the First Social Scientist will be of interest to anyone who wants to know how we have come to analyze societies in the terms we have.

Elster demonstrates a deep familiarity with Tocqueville’s writings, though he focuses in this book on L’Ancien regime and Democracy in America. So Elster’s Tocqueville is textually well supported. At the same time, Tocqueville is not really a theoretical writer. Instead, it is necessary to infer his theoretical ideas from the comments he makes about historical events and actors. So Elster is forced to engage in a fair amount of rational reconstruction of the theories that underlay a variety of Tocqueville’s observations about the politics of France and America.

There are several elements of Elster’s interpretation of Tocqueville that seem particularly significant. One is Elster’s view that Tocqueville operated on the basis of a conception of social explanation that depended on social mechanisms rather than general laws. Elster believes that the most important feature of Tocqueville’s claim to being a sociologist is his consistent search for causes. The other key to Elster’s analysis of Tocqueville is his focus on features of the actor — reason, interests, and passions, or what Tocqueville refers to as “habits of the heart”.

Among the social mechanisms that Elster focuses on are those that surround preference formation. This question is plainly key to having a theory of political psychology: why do people make the choices that they do? He singles out three distinct psychological mechanisms that Tocqueville alludes to: the spillover effect, the compensation effect, and the satiation effect (kl 292). Preference formation is a topic that has consistently interested Elster, and he spends much time on the question in his early writings, including the formal question of time preferences.

What is “enlightened self-interest”? Elster finds that Tocqueville contrasts “egoism” with “enlightened self-interest” as well as with altruism. Egoism means an exclusive attention to one’s own interests in the moment. So it is opposed both to altruism (concern for the interests of others) and foresight (concern for one’s future interests) (kl 1113). (This bears out Amartya Sen’s comment in “Rational Fools” that the purely economic man is indeed close to being a social moron; link.)

Elster is particularly interested in Tocqueville’s treatment of the passions. He specifically discusses Envy, Fear, Hatred , Enthusiasm, Contempt, and Shame as emotions (passions) that often drive behavior in opposition to both interests and reason. This brings his discussion into intersection with that of Albert Hirschman in The Passions and the Interests. (The Kindle edition includes a very interesting introduction by Amartya Sen; link.) Hirschman’s book looks at the ways that early political economists and philosophers such as Smith and Hume thought about the relationships among reason, passion, and interest, with a view toward the generally moderating effects of interests on behavior in many historical settings. Elster finds a very similar line of thought in Tocqueville.

Elster addresses the topic of the micro-macro relationship in the conclusion. He finds that Tocqueville is interested in both directions of influence — from micro to macro and from macro to micro. He provides a diagram that looks a lot like an inverted version of Coleman’s boat: 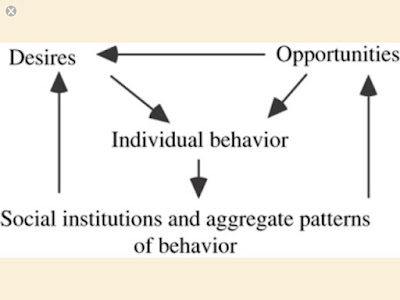 Elster doesn’t put his views in these terms, but much of what he has to say about Tocqueville can be put in the category of piecing together Tocqueville’s theory of the actor: why people behave as they do. His discussions of preferences, individualism, norms, and passions all fall in the domain of a theory of the actor.

Elster’s treatment of Tocqueville is of interest in part because of its direct relevance to the explication of Tocqueville’s thought. But I find it more interesting for what it shows about Elster’s own thinking about sociological investigation. It is plain that Elster favors an actor-centered sociology. In some writings he explicitly describes his view as methodological individualism. Here the approach is somewhat more tolerant of schemes of explanation that are not directly reductionist. But it is focused on the varieties and sources of human action, and the ways that these features of action compound into unexpected social outcomes.

(Here is an earlier post where I discussed Tocqueville’s status as a founding sociologist; link.)