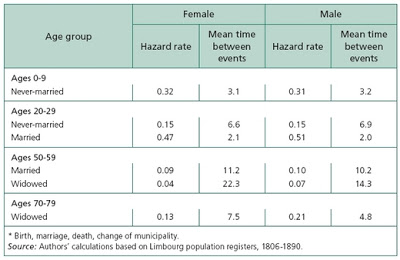 I talked recently with George Alter, a leading historical demographer at the University of Michigan and author of Family and the Female Life Course: The Women of Verviers, Belgium, 1849-1880. (Here is George’s presidential address to the Social Science History Association in 2010; link.) Alter has been a long-standing partner in the Eurasian Population and Family History Project, a genuinely innovative “large science” effort to bring together demographic studies of locations from Sweden to Japan.

George and I talked about something that is of interest to philosophers of the social sciences, but is rarely discussed — the comings and goings of methodological innovations in some areas of the social sciences. There are a handful of “big picture” questions that define the philosophy of social science, and these don’t change very rapidly over time and discipline. For example: What is a good explanation? What is the logic of causal inference? How do facts about individuals relate to facts about structures? These are questions that are broadly applicable across many social-science disciplines, and often the answers are fairly similar in different disciplines as well. But it turns out that specific disciplines are sometimes confronted with problems of data analysis and inference that require new methods and new analytical tools, and there may be moments in which significant methodological change occurs in a relatively short period of time.

George’s field is historical demography — the effort to reconstruct the population history of regions and countries through the registers and censuses that still exist for our study. This means examination of marriage behavior, fertility, mortality, emigration, and other key demographic trends. But it also means searching out the causes that can be traced of changes in these variables. So the field of historical demography is descriptive, but it is also analytical and causal; historical demographers are interested in identifying large social factors that influenced population behavior in centuries past.

The problem that Alter and some of his colleagues confronted in their research was a technical and logical one: how to extract the most useful information from population registers. And it turns out that answering this question requires developing radically new tools of analysis.

Most readers will find the methods used in some parts of this study unfamiliar. Some of these methods, like hazard models, have only recently become common in the social sciences, and there have been few previous applications in family history. The development of a new methodology, which is presented below in Chapter 2, was dictated by the characteristics of the Belgian population registers, from which data on nineteenth-century Verviers have been drawn. (13)

A population register differs from a census in a crucial respect: it provides an exhaustive chronological list of the births, deaths, entries, exits, and marital changes of the population present in the region over a specific period of time. This turns out to be a very tricky problem, and one that was not easily handled by traditional techniques of demographic analysis. Traditionally demographers made use of “snapshots” of a population at a time: the size of the population, the percent employed in a given industry, the percent married, etc. But demographic processes are temporal processes; so looking at snapshots frozen in time tends to lose an important dimension of the phenomena. And the method that will work well for population registers needs to be custom-designed to do a good job of representing temporality.

Alter describes the alternative methodology he and other demographers have developed to handle this particular set of problems in chapter two of Family and the Female Life Course. It is a complicated story, but fundamentally it comes down to a shift of perspective on demographic process — a shift from persons and events to intervals of time. This means moving away from counting individuals to counting “person years”. Alter characterizes this shift with the following tables:

And here is another take on the same data, this time arranged by age of the person rather than absolute date: 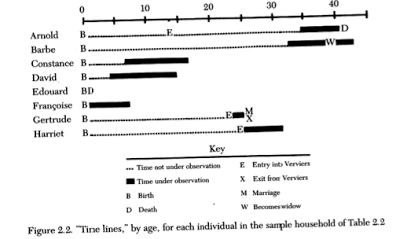 Each of these ways of looking at the data highlights different aspects of the demographic history of this small group.

The information contained in the population register can be transformed into a data set representing person-years and status during that interval. And it is then possible to use these data elements to compute age-specific rates of various demographically important states. Alter emphasizes that these methods permit a much more fine-grained use of the information presented by a population register.

Alter then undertakes to adapt statistical methods to the problem of assessing the causal importance of various sets of factors for the occurrence of other factors; for example, the effect of “living with parents between 25 and 30” on “lifetime fertility”. The tool that Alter turns to is the statistics of hazard models. Here is a brief description of hazards models from Wikipedia:

Proportional hazards models are a class of survival models in statistics. Survival models relate the time that passes before some event occurs to one or morecovariates that may be associated with that quantity of time. In a proportional hazards model, the unique effect of a unit increase in a covariate is multiplicative with respect to the hazard rate. For example, taking a drug may halve one’s hazard rate for a stroke occurring, or, changing the material from which a manufactured component is constructed may double its hazard rate for failure. Other types of survival models such as accelerated failure time models do not exhibit proportional hazards. These models could describe a situation such as a drug that reduces a subject’s immediate risk of having a stroke, but where there is no reduction in the hazard rate after one year for subjects who do not have a stroke in the first year of analysis. (link)

There is an unexpected difficulty that this method must confront — the problem of what demographers call censoring. Essentially this comes down to the simple fact that a given population register leaves parts of an individual’s life undocumented before and after the period covered by the register. So a woman who has not yet given birth at the age of 31 in 1835 (the end of the population register period) will be classified as childless; whereas she may well have a child in the next five years. But to add this woman into a raw count of women with and without children has the effect of under-estimating fertility. Alter shows how “life tables” can be used to address this problem. Essentially it is possible to use the data included in the population register itself to compute age-specific estimates of relevant variables (first marriage, first child, etc.) and then compute the average age of marriage from the life table. Here is an illustration:

This post doesn’t suffice to explain the methodology that Alter develops. Interested readers will need to work through Alter’s analysis with the same rigor they would apply to learning a new piece of physics. But this brief description does serve to highlight a key fact about research in the social sciences: social science methodology is not finished. Different fields of research encounter new problems with new sources of data; but they also sometimes raise issues about better ways of handling data that has long been available. This means that there will often be times of lively activity and change in the methods of a social science. It also means that it is very interesting to follow the details of the development of a discipline during these periods of change.

(It is interesting to re-read William Sewell’s essay, “Three Temporalities: Towards an Eventful Sociology” (in Logics of History: Social Theory and Social Transformation) in light of Alter’s remarks about the temporality associated with demographic change.)