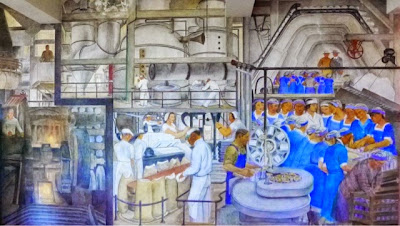 One particularly appealing aspect of agent-based models is the role they can play in demonstrating the inner workings of a major class of social mechanisms, the group we might refer to as mechanisms of aggregation. An ABM is designed to work out how a field of actors of a certain description, in specified kinds of interaction, lead through time to a certain kind of aggregate effect. This class of mechanisms corresponds to the upward strut of Coleman’s boat. This is certainly a causal story; it is a generative answer to the question, how does it work?

However, anyone who thinks carefully about causation will realize that there are causal sequences that occur only once. Consider this scenario: X occurs, conditions Ci take place in a chronological sequence, and Y is the result. So X caused Y through the causal steps instigated by Ci. We wouldn’t want to say the complex of interactions and causal links associated with the progress of the system through Ci as a mechanism linking X to Y; rather, this ensemble is the particular (in this case unique) causal pathway from X to Y. But when we think about mechanisms, we generally have in mind the idea of “recurring causal linkages”, not simply a true story about how X caused Y in these particular circumstances. In other words, for a causal story to represent a mechanism, it needs to be a story that can be found to hold in an indefinite number of cases. Mechanisms are recurring complexes of causal sequences.

An agent-based model serves to demonstrate how a set of actors give rise to a certain aggregate outcome. This is plainly a species of causal argument. But it is possible to apply ABM methods to circumstances that are unique and singular. This kind of ABM model lacks an important feature generally included in the definition of a mechanism– the idea of recurrence across a number of cases. So we might single out for special attention those ABMs that identify and analyze processes that recur across multiple social settings. Here we might refer, for example, to the “Schelling mechanism” of residential segregation. There are certainly other unrelated mechanisms associated with urban segregation — mortgage lending practices or real estate steering practices, for example. But the Schelling mechanism is one contributing factor in a range of empirical and historical cases. And it is a factor that works through the local preferences of individual actors.

So this seems to answer one important question: in what ways can ABM simulations be said to describe social mechanisms? They do so when (i) they describe an aggregative process through which a given meso-level outcome arises, and (ii) the sequence they describe can be said to recur in multiple instances of social process.

This is a complicated question. One possible response seems easily refuted: there are mechanisms that work from meso level (organizations) to macro level (rise of fascism) that do not invoke the features of individual actors. Therefore there are mechanisms that do not conform strictly to the requirements of methodological individualism. However, there is nothing in the ABM methodology that requires that the actors should be biological individuals. Certainly it is possible to design an ABM representing the results of competition among firms with different behavioral characteristics. This example still involves an aggregative construction, a generation of the macro behavior on the basis of careful specification of the behavioral characteristics of the units.

Another possible candidate for mechanisms not amenable to ABM analysis might include the use of network analysis to incorporate knowledge-diffusion characteristics into analysis of civil unrest and other kinds of social change. It is sometimes argued that there are structural features of networks that are independent of actor characteristics and choices. But given that ABM theorists often incorporate aspects of network theory into their formal representations of a social process, it is hard to maintain that facts about networks cannot be incorporated into ABM methods.

Another candidate is what Chuck Tilly and pragmatist sociologists (Gross, Abbott, Joas) refer to as the “relational characteristics” of a social situation. Abbott puts the point this way: often a social outcome isn’t the result of an ensemble of individuals making discrete choices, but rather is a dance of interaction in which each individual’s moves both inform and self-inform later stages of the interaction. This line of thought seems effective as a rebuttal to methodological individualism, or perhaps even analytical sociology, but I don’t think it demonstrates a limitation of the applicability of ABM modeling. ABM methods are agnostic about the nature of the actors and their interactions. So it is fully possible for an ABM theorist to attempt to produce a representation of the iterative process just described; or to begin the analysis with an abstraction of the resultant behavioral characteristics found in the group.

I’ve argued here that it is legitimate to postulate meso-to-meso causal mechanisms. Meso-level things can have causal powers that allow them to play a role in causal stories about social outcomes. I continue to believe that is so. But considerations brought forward here make me think that even in cases where a theorist singles out a meso-meso causal mechanism, he or she is still offering some variety of disaggregative analysis of the item to be explained. It seems that providing a mechanism is always a process of delving below the level of the explananda to uncover the underlying processes and causal powers that bring it about.

So the considerations raised here seem to lead to a strong conclusion — that all social mechanisms can be represented within the framework of an ABM (stipulating that ABM methods are agnostic about the kinds of agents they postulate). Agent-based models are to social processes as molecular biology is to the workings of the cell.

(It needs to be recognized that identifying agent-based social mechanisms isn’t the sole use of ABM models, of course. Other uses include prediction of the future behavior of a complex system, “what if” experimentation, and data-informed explanations of complex social outcomes. But these methods certainly constitute a particularly clear and rigorous way of specifying the mechanism that underlies some kinds of social processes.)