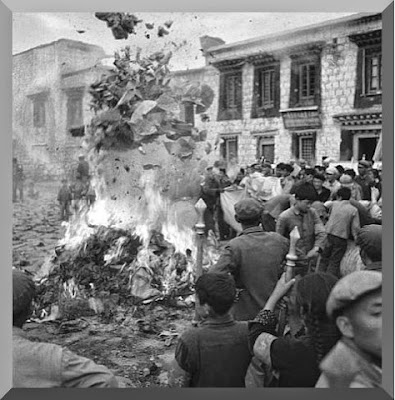 It has been observed in earlier posts that there is still a lot we do not understand about China’s Cultural Revolution (post, post, post). Why such a sudden and apparently crazed eruption of violence? Why such ultra-radicalism among extremely young adolescents? Why the apparent self-destruction of the Party? How to explain the behavior of Mao and other high Party officials? How much artful politics and how much contagious irrational behavior?

Yiching Wu’s The Cultural Revolution at the Margins: Chinese Socialism in Crisis provides an important body of new evidence and perspective on these topics. Wu undertakes to find the perspective of the margin in this study — the players who were not major national leaders in politics or military, but local activists, cadres, and youth who brought their own, often heterodox, political demands and goals to the struggles. Here is how Wu describes his overriding purpose in the book:

This book is a history of the Cultural Revolution from the perspective of its unruly margins, written with the purpose of better understanding and recuperating a moment of political and ideological possibilities that have been silenced in conventional history and understudied in existing scholarship. Exploring what may be considered a decentered account of the Cultural Revolution, this book attempts to give voices and historical visibility to those otherwise consigned to the peripheries of the movement, where the discontented, disadvantaged, and excluded pressed their demands by creatively exploiting the paralysis of the political order. (xvi)

Wu believes that the currents he uncovers help to explain the surprising twists and turns of events between 1966 and 1976 in China. But they are also important for reasons having to do with China’s subsequent development as well. The suppression of the more populist and anti-bureaucratic elements of the CR movement in 1966-1967 prepared the ground for China’s turn to market reform and regularization of the economy a decade later.

I argue that the origins of the momentous changes that have radically transformed contemporary Chinese society since the late 1970s and early 1980s can be traced, at least partly, to the height of the Cultural Revolution in 1967–1968, when the turn toward demobilization of the mass movement and restoration of party and state organizations became hardly mistakable. (xvii)

Essentially, if I understand Wu’s argument correctly, he believes that the ultra-left strands of the CR were defeated fairly early in the decade of the Cultural Revolution, and the silencing of these voices prepared the ground for a more moderate or even “right-ist” set of policies after the end of the CR period.

I wrote recently of Martin Whyte’s critique of the “social volcano” interpretation of contemporary China. Whyte argues that an important survey of public opinion demonstrates that China is not riven by social conflict over inequalities and corruption. Wu plainly believes otherwise:
The state’s concern for security may be justified by the ominous reality of proliferating social antagonisms in China. Nationwide, cases of “mass incidents”— a euphemism for protests, riots, and other forms of unrest— escalated from fewer than 10,000 in 1993 to 15,000 in 1997, 32,000 in 1999, 50,000 in 2002, 58,000 in 2003, 74,000 in 2004, and 87,000 in 2005.18 By 2010, the number of protests and riots reportedly had more than doubled again, to 180,000.19 The deep disaffection of those left behind by China’s rapid economic development is often rooted in a historical experience obscured by the dominant discourse. The danger posed by the country’s socialist and revolutionary past to the current sociopolitical order is evident, as shown in a popular ditty:
Beijing relies on the [Party] Center, Shanghai on its connections, Guangzhou leans on Hong Kong, The drifting population lives by Mao Zedong Thought.20 (6)
Here Wu plainly believes that there is growing unrest and dissatisfaction, potentially relevant to anti-regime mobilization.
Wu’s approach to this material is original and illuminating. He discusses the decade as a “heterogeneous” set of processes that were often independent from the official ideologies and discourses advanced by political leaders and propagandists. Here is an illustrative statement:
The term “margins”  here pertains not only to the actors involved— those who  were disadvantaged or marginalized in Chinese social and political life— but also to the issues and demands that galvanized political contention, practices that went against the grain, and points of view outside the range of the permissible. Often tentative, heterogeneous, and dispersed, these developments  were not marginal in the sense of being trivial or having little political relevance. Although politics at the margins often played no decisive role in determining Red Guard factionalism, it sometimes mobilized tens of thousands of people and occurred in major political centers. (10)
What this comes down to fundamentally is the idea that the CR was not one unified thing, but rather a heterogeneous mix of groups, views, interests, strategies, and passions that cannot be readily described in simple abstract terms.
A key thread in Wu’s construction is the toxic role that was played in the early years of Red Guard activism by the CCP’s class classification system. Individuals, including especially children, were classified as red or black, heroes or monsters, depending on the occupational status of their fathers and the record of political behavior associated with their families. So a system of hereditary privilege based on bloodlines of proletarian purity was created favoring the sons and daughters of Party and military cadres, and creating permanent and sometimes deadly discrimination against the children of “bourgeois” or “rightist” fathers. (Wu notes that this pattern of privilege continues into the twenty-first century; an astonishing percentage of China’s contemporary billionaires are princelings.) And Wu believes that this flattened system had deeply destructive consequences in the decade of turmoil that ensued.

One of the most gripping stories in the book is Wu’s careful uncovering of the (short) life and writings of Yu Luoke, an industrial apprentice whose reasoned essay “On Class Origins” on the Communist impropriety of the hereditary privilege created by the classification system eventually found readership in the millions. (Yu was executed at the age of 26 in the presence of 100,000 spectators for the crime of having promulgated these counter-revolutionary ideas; 92.) As Wu presents the case, Yu’s analysis was precise, rigorous, and theoretically informed; and it laid the basis for a more liberal understanding of universal rights in Chinese society.

The theme of heterogeneity carries through to Wu’s analysis of the social composition of various segments of activists within the CR. This is particularly evident in his treatment of the Shanghai January Storm (January 1967). Workers were a critical part of this important episode; but workers were not a homogeneous group in Shanghai or elsewhere. Rather, there were different ideologies, grievances, and interests across various groups of workers:
In Shanghai, the sources of socioeconomic discontents were highly diverse, and the lines of demarcation were multiple: between workers employed in state enterprises and those in collective sectors, between senior and junior workers, between permanent and temporary workers, and so on…. One of the most important divisions in Shanghai was that between regular, permanent workers and the vast semiproletarian workforce consisting of temporary and contract workers. (101-102)

Wu demonstrates how important it is to provide a more granular analysis of the various groups of the “proletariat” who became activists in Shanghai — a lesson that conforms well with current thinking within theories of contentious politics more generally.

There is much more of interest in The Cultural Revolution at the Margins: Chinese Socialism in Crisis. But this brief discussion serves to illustrate a more general point as well: the history of China’s Cultural Revolution is not yet complete, 38 years after the death of Mao. Yiching Wu has made another important step forward in filling out that history.