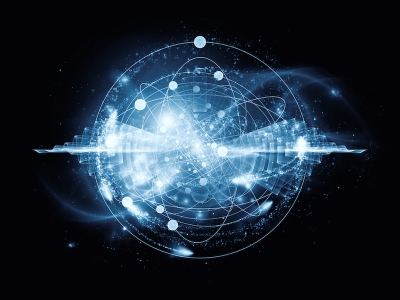 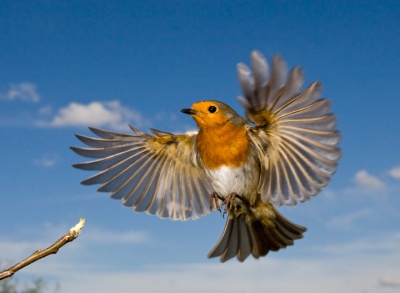 I have discussed several times an emerging literature on “quantum consciousness”, focusing on Alex Wendt’s provocative book Quantum Mind and Social Science: Unifying Physical and Social Ontology. Is it possible in theory for cognitive processes, or neuroanatomical functioning, to be affected by events at the quantum level? Are there known quantum effects within biological systems? Here is one interesting case that is currently being explored by biologists: an explanation of the ability of birds to navigate by the earth’s magnetic field in terms of the chemistry of entangled electrons.

It has been hypothesized that the ability of birds to navigate by reference to the earth’s magnetic field may be explained by quantum effects of electrons in molecules (cryptochromes) in the bird’s retina. Thorsten Ritz is a leader in this area of research. In “Magnetic Compass of Birds Is Based on a Molecule with Optimal Directional Sensitivity” he and his co-authors describes the hypothesis in these terms (link):

The radical-pair model (7,8) assumes that these properties of the avian magnetic compass—light-dependence and insensitivity to polarity—directly reflect characteristics of the primary processes of magnetoreception. It postulates a crucial role for specialized photopigments in the retina. A light-induced electron-transfer reaction creates a spin- correlated radical pair with singlet and triplet states. (3451)

Here is the chemistry from the same article (3452): 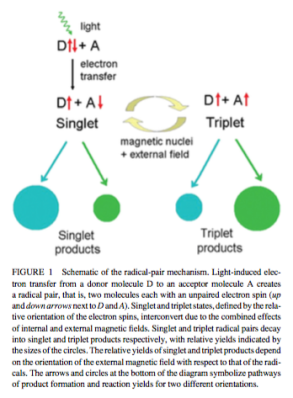 Markus Tiersch and Hans Briegel address these findings in “Decoherence in the chemical compass: the role of decoherence for avian magnetoreception”. They describe the hypothetical mechanism of paired-electron chemistry as a mechanism in birds for detecting magnetic fields (link):

Certain birds, including the European robin, have the remarkable ability to orient themselves, during migration, with the help of the Earth’s magnetic field [3-6]. Responsible for this ‘magnetic sense’ of the robin, according to one of the main hypotheses, seems to be a molecular process called the radical pair mechanism [7,8] (also, see [9,10] for reviews that include the historical development and the detailed facts leading to the hypothesis). It involves a photo-induced spatial separation of two electrons, whose spins interact with the Earth’s magnetic field until they recombine and give rise to chemical products depending on their spin state upon recombination, and thereby to a different neural signal. The spin, as a genuine quantum mechanical degree of freedom, thereby controls in a non-trivial way a chemical reaction that gives rise to a macroscopic signal on the retina of the robin, which in turn influences the behaviour of the bird. When inspected from the viewpoint of decoherence, it is an intriguing interplay of the coherence (and entanglement) of the initial electron state and the environmentally induced decoherence in the radical pair mechanism that plays an essential role for the working of the magnetic compass. (4518)

So the hypothesis is that birds (and possibly other organisms) have evolved ways of exploiting “spin chemistry” to gain a signal from the presence of a magnetic field. What is spin chemistry? Here is a definition from the spin chemistry website (yes, spin chemistry has its own website!) (link):

Broadly defined, Spin Chemistry deals with the effects of electron and nuclear spins in particular, and magnetic interactions in general, on the rates and yields of chemical reactions. It is manifested as spin polarization in EPR and NMR spectra and the magnetic field dependence of chemical processes. Applications include studies of the mechanisms and kinetics of free radical and biradical reactions in solution, the energetics of photosynthetic electron transfer reactions, and various magnetokinetic effects, including possible biological effects of extremely low frequency and radiofrequency electromagnetic fields, the mechanisms by which animals can sense the Earth’s magnetic field for orientation and navigation, and the possibility of manipulating radical lifetimes so as to control the outcome of their reactions. (link)

Tiersch and Briegel go through the quantum-mathematical details on how this process might work in the case of molecules that might be found in birds’ retinas. Here is the conclusion drawn by Tiersch and Briegel:

It seems that the radical pair mechanism provides an instructive example of how the behaviour of macroscopic entities, like the European robin, may indeed remain connected, in an intriguing way, to quantum processes on the molecular level. (4538)

This line of thought is still unconfirmed, as both Ritz and Tiersch and Briegel are careful to emphasize. If confirmed, it would provide an affirmative answer to the question posed above — are there biological effects of quantum-mechanical events? But even if confirmed, it doesn’t seem like an enormously surprising result. It traces out a chemical reaction which proceeds differently depending on whether entangled electrons in molecules stimulated by a photon have been influenced by a magnetic field; this gives the biological system a signal about the presence of a magnetic field that does in fact depend on the quantum states of a pair of electrons. Entanglement is now well confirmed, so this line of thought isn’t particularly radical. But this is entirely less weird than the idea that quantum particles are “conscious”, or that consciousness extends all the way down to the quantum level (quantum interactive dualism, as Henry Stapp calls it; link). And it is nowhere nearly as perplexing as the claim that “making up one’s mind” is a form of a collapsing quantum state represented by a part of the brain.

(Of interest on this set of topics is a recent collection, Quantum physics meets the philosophy of mind, edited by Antonella Corradini and Uwe Meixne. Here is a video in which Hans Briegel discusses research on modeling quantum effects on agents: https://phaidra.univie.ac.at/detail_object/o:300666.)