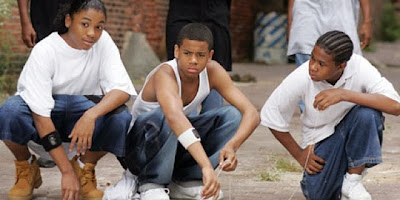 Source: The Wire
It is becoming increasingly clear that the criminal justice system is an important component of the system of race in the United States today. Michelle Alexander’s important book The New Jim Crow: Mass Incarceration in the Age of Colorblindness makes the case that the war on drugs and the war on crime have functioned disproportionately to incarcerate and control young black men in America’s inner cities. Here is how she summarizes her position:

What has changed since the collapse of Jim Crow has less to do with the basic structure of our society than with the language we use to justify it. In the era of colorblindness, it is no longer socially permissible to use race, explicitly, as a justification for discrimination, exclusion, and social contempt. So we don’t. Rather than rely on race, we use our criminal justice system to label people of color “criminals” and then engage in all the practices we supposedly left behind. Today it is perfectly legal to discriminate against criminals in nearly all the ways that it was once legal to discriminate against African Americans. Once you’re labeled a felon, the old forms of discrimination—employment discrimination, housing discrimination, denial of the right to vote, denial of educational opportunity, denial of food stamps and other public benefits, and exclusion from jury service—are suddenly legal. As a criminal, you have scarcely more rights, and arguably less respect, than a black man living in Alabama at the height of Jim Crow. We have not ended racial caste in America; we have merely redesigned it. (kl 218-225)

Now Alice Goffman takes the argument an important step forward in her ethnographic book, On the Run: Fugitive Life in an American City. The book records her observations and experiences of the intimate lives of a handful of young black men and women in inner-city Philadelphia during the early 2000’s. Goffman formed relationships with this circle of men and women while she was an undergraduate sociology student at the University of Pennsylvania, and she made careful efforts to document her observations through extensive field notes. The book is an ethnographic study of “6th Street Boys” and the generally bad encounters that they had daily with the police, the courts, and the prisons and jails to which they were sent repeatedly. She highlights the massive consequences these facts have for the population of inner-city African-American young people:

By 2000, the US prison population swelled to five times what it had been in the early 1970s. An overwhelming majority of men going to prison are poor, and a disproportionate number are Black. Today, 30 percent of Black men without college educations have been to prison by their midthirties. One in four Black children born in 1990 had an imprisoned father by the time he or she turned fourteen. (kl 188)

The book is important reading for many concerned Americans as they try to make sense of recent police killings of unarmed young black men in several cities — the shooting death of unarmed Michael Brown in Ferguson, the choking death by police officers of Eric Garner in New York, and the shooting death of Ezel Ford by police officers in Los Angeles. Alice Goffman’s book sheds light on these specific incidents by documenting a consistent pattern of harsh treatment of young black men on the streets of Philadelphia by police officers. (In fact, Goffman herself witnessed the choking death of the boyfriend of one of her friends in the neighborhood.) In describing her own observations on 6th Street she writes:

Fourteen times during my first eighteen months of near daily observation, I watched the police punch, choke, kick, stomp on, or beat young men with their nightsticks. (kl 220)

The importance of the book goes beyond the important fact of incarceration as a means of social control — the thrust of Michelle Alexander’s book — because it makes vividly clear the consequences for ordinary life that are created for the young men whom she studies of the patterns of surveillance, arrest, and probation revocation that they confront. She describes the necessity experienced by young Philadelphia men of needing to conceal one’s personal relationships, get by without identification papers like driver’s licenses, and run from the police when they show up on the block or at the front door behind a battering ram.

A central social fact about any person living in the community of 6th Street is his or her legal status; more specifically, whether the person is likely to attract police attention in the future: whether he can get through a police stop, or make it home from a court hearing, or pass a “piss test” during a probation meeting. Those who have no pending legal entanglements or who can successfully get through a police stop, a court hearing, or a probation meeting are known as clean. Those likely to be arrested should the authorities stop them, run their names, or search them are known as dirty. (kl 237)

These existential facts make the most ordinary parts of middle class life all but unattainable for many young men on the street — getting a stable job, taking a plane, having a checking account, or making it through a police interrogation without being arrested. The risk of arrest itself — even in the midst of entirely innocent activities of ordinary life — is a constant perturbance for these young men.

Together, the chapters make the case that historically high imprisonment rates and the intensive policing and surveillance that have accompanied them are transforming poor Black neighborhoods into communities of suspects and fugitives. A climate of fear and suspicion pervades everyday life, and many residents live with the daily concern that the authorities will seize them and take them away. A new social fabric is emerging under the threat of confinement: one woven in suspicion, distrust, and the paranoiac practices of secrecy, evasion, and unpredictability. (kl 284)

Goffman’s work in this book is an enormously valuable contribution to our (middle class, privileged) ability to see more clearly into the lives and circumstances of young people living only a few miles from our universities, businesses, or shopping malls. It is rare for privileged people (well educated, secure jobs, comfortable homes, safe environments for our children and grandchildren) to be in a position to gain insight into the equally important human realities of life on the street in poor inner-city communities. And yet we need to understand these social realities, if we are to be able to conceive of the kinds of changes that are needed in our society to allow for decent opportunities and outcomes for all the young people in our country.

(Many urban sociologists believe that The Wire serves a valuable function in teaching their discipline — in ways in which most other television dramas do not. One reason for this is the realism and empathy with which the series depicts the life circumstances and choices of the children and young men who become the “corner boys” in Baltimore.)